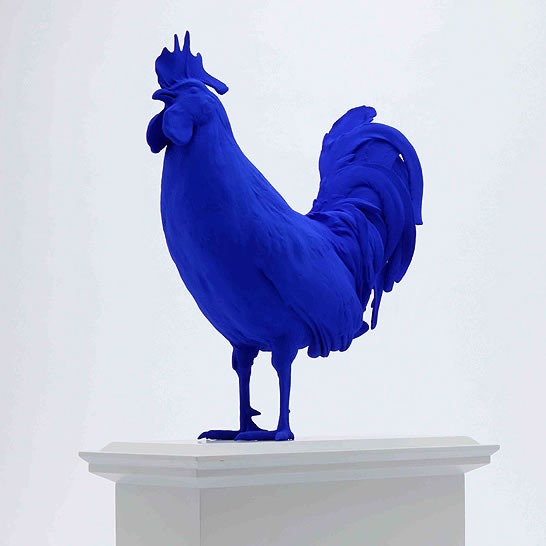 This week: We talk to artist Katharina Fritsch!

Katharina Fritsch is known for her sculptures and installations that reinvigorate familiar objects with a jarring and uncanny sensibility. Her works’ iconography is drawn from many different sources, including Christianity, art history and folklore. She attracted international attention for the first time in the mid-1980s with life-size works such as a true-to-scale elephant. Fritschâ€™s art is often concerned with the psychology and expectations of visitors to a museum. Gary Garrels wrote that â€œOne of the remarkable features of Fritschâ€™s work is its ability both to capture the popular imagination by its immediate appeal and to be a focal point for the specialized discussions of the contemporary art world. This all too infrequent meeting point is at the center of her work, as it addresses the ambiguous and difficult relationships between artists and the public and between art and its displayâ€”that is, the role of art and exhibitions and of the museum in the late twentieth century.â€ The special role colour plays in Fritsch’s work has roots in her childhood visits to her grandfather, a salesman for Faber-Castell art supplies, whose garage was well-stocked with his wares.

Her most recognized works are RattenkÃ¶nig/Rat King (1993), a giant circle of black polyester rats, included in the 1999 Venice Biennale. Other works include MÃ¶nch (Monk) (2003), a stoic, monochromatic male figure, made of solid polyester with a smooth, matte black surface; Figurengruppe / Group of Figures (2006-2008), an installation of nine elements; and Hahn (Cock) (2010), a 14ft (4.3m) cockerel in ultramarine blue to be shown on London’s Trafalgar Square in 2013.

In her working process, Fritsch combines the techniques of traditional sculpture with those of industrial production. While many of her early works were handcrafted, Fritsch now makes only the models for her sculptures and then hands these over to a factory for production, to near-pathological specifications. She uses these models to create moulds, from which the final sculptures are cast in materials such as plaster, polyester and aluminium. Many are made as editions, meaning that multiple casts are taken from one mould.[5] For the duration of some of her exhibitions, Fritsch has made her multiples available for sale at the respective museums.