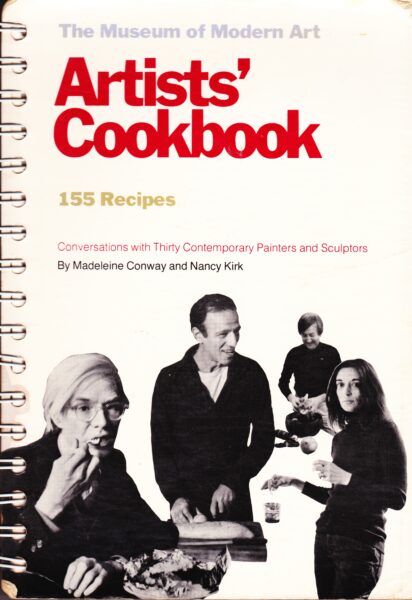 Sometimes a book will sit on the shelf so long that it loses its specificity and becomes merely a faceless one of many. Recently I have been revisiting this group of old friends who are stacked shoulder-to-shoulder on my bookshelves like classmates in some dimly remembered second grade group photo. The Artistsâ€™ Cookbook by Madeleine Conway and Nancy Kirk is a 1977 publication by The Museum of Modern Art. This book has lived on my shelf since 1979 or so when my best friendâ€™s mom gave it to me in a purge of superfluous reading material. As an elementary schooler, I had little use for a cookbook, especially of the gift book variety, but since Iâ€™ve kept it all these years, it must somehow appeal to me. Perhaps she sensed this. This is also the same women, who, when I was thirteen, offhandedly gave me the complete diaries of Anais Nin. Hmmm.

Subtitled â€œConversations with Thirty Contemporary Painters and Sculptors,â€ The Artistâ€™ Cookbook offers a photograph of the artist in the kitchen, a one-page discussion of his or her perspective on food, followed by a series of the artistâ€™s own recipes. I canâ€™t even begin to imagine what the authors said when they pitched this book. Maybe something along the lines ofâ€¦ â€œWe could get Warhol to make soupâ€ (146-148). â€œMarisol eats only â€˜naturalâ€™ foodâ€ (97-102). â€œAnd oh yea, I hear Larry Rivers makes an excellent Bronx Chickenâ€ (126-129). Now I love Willem de Kooning as much as the next person, but do I really want a recipe for his brother Koosâ€™s Seafood Sauce? Maybe not, but somehow reading Robert Indianaâ€™s recipe for Hoosier Borscht makes me feel as if I know something about him that his art doesnâ€™t reveal. 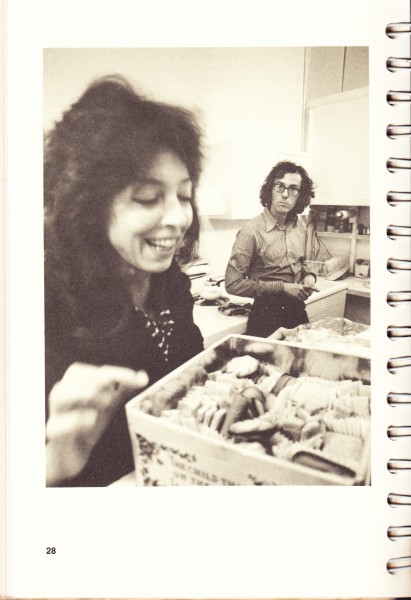 The most charming artists in the book are Christo and Jeanne-Claudeâ€”listed only as Christo, of course, since it was 1977. Still, within the text they are treated equally as artists. But only one of them cooks, and that is Jeanne-Claude, and that is if you consider opening a can â€œcooking.â€ Their little introductory bio is both delightful and bullshitty. The photo, though, is what makes their story. In it, Jeanne-Claude and Christo are younger than I have ever seen them. Christo looks on as Jeanne-Claude giddily peers into a box of cookies. It was only when I was writing this that I realized that I have the same cookie tin. Though you canâ€™t tell from the photo, the sides of the box are inscribed with marital advice. For example, Be to her virtues very kind. Be to her faults a little blind. As well as, And oft I have hear defended, Little said is soonest mended. This advice is well employed in our house. Judging by what by all accounts was a successful love affair, it seems that the adviceÂ worked as well for Christo and Jeanne-Claude.

Â The Artistsâ€™ Cookbook has been out of print pretty much since the moment it was published. Unlike other out-of-print art books, this one is still affordable, maybe because it does not fall tidily into any particular category. The interwebs show it starting at $25. Collecting vintage cookbooks right now is HOT HOT HOT, and this book would make a nice gift for someone who likes art and cooking, but not, perhaps, for someone who just loves to cook. These recipes are a little hit-or-miss.

The Artistsâ€™ Cookbook: Conversations with Thirsty Contemporary Painters and Sculptors