Hyperjunk: Notes on the Installation Demands of Media Objects 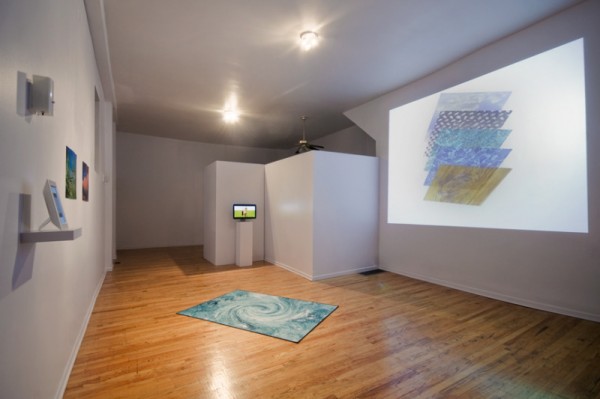 Documentation Photo of A Small Forest at Kunsthalle New

The representation and exhibition of digital or computer based works in the gallery is no small task for today’s young contemporary curator/gallery manager. Without even considering the surmounting cost that it would take to show media work at the level of a major institution, the mere spatial concerns that these works present is reason enough to give one a headache. Some, like Barmecidal Projects (a project I’ve written on recently), have obviously taken to a purely digital approach of exhibiting online works not just for economic reasons but also to act as diametric counter points to the physical demand of the art world. But even as these projects become more appealing and gain notoriety for their alternative approach to showing young work spawned from the Internet, they still do not necessarily solve any problems for those that wish to bring this work into dialog with more â€œtraditionalâ€ mediums (I should stress that I’m not being pejorative here, as I typically would). One cannot expect such demands to be met by these emerging projects and virtual spaces, but a co-operative, co-existing conversation between screen-objects and non-screen-objects still seems contentious and rife with frustration. This is especially the case as the vogue of the identified netartist is quickly passing as evidenced by makers moving rapidly offline and (back?) into object making.

This subject particularly peaked my interest through dealing with these issues in two shows I have recently helped curate or oragnize. Last month I worked with Bea Fremderman who runs Kunsthalle New down in Pilsen on a show called A Small Forest which consisted of work by four emerging artists all exploring delicate digital landscapes and the representation of the natural through the lens/influence of network technology. Although Fremderman and I already knew that we wanted to include Kate Steciw Water Rub/Protal floor piece in the show, but once we had begun our installation we saw that installing one spatial object amidst works either pushed back against the wall, or resting flat in print/projection, a fear developed that we might be misrepresenting or poorly portraying the work. Both of us knew how the selected works could maintain an intimacy that the framework of a personal computer provided, but when we brought these works into the space we were immediately confronted with how each work commanded a unique set of physical demands for installation and exhibition.

In this way, I started to question what incentive I had for bringing works off the screen or away from a network into a more static environment; one that situated the immediacy of the work to it’s physical representation, and not to it’s ability to be constantly accessibility/hyperlinked. These variable points of accessibility between the spectrum of virtual and physical presentation shouldn’t be viewed as judgements of a work, but instead could be used as a metric for finding effective strategies for installing media art. When formulating a show based around similar aesthetic and/or conceptual approaches the reality of the works in space immediately changed what I initially had seen as a direct conversation. Even the relocation of the works into separate media devices determined such a significant reconsideration of how the pieces worked together.

When asked what methods and philosophies Fremderman brings to her work with Kunsthalle New and the installation of work in that space she commented:

Artwork contains a series of components that allow an idea to be translated visually. These components are broken down into the root-content, which refers to the subject of a given image; and a sub-content, which can be the image frame, the space surrounding, or the manner in which the piece is shown in relation to other works. Apart from the indexical, serial display of photographs in a space – which serves to obliterate that sub-content in favor of the portrayed subject matter – the inclusion of sub-content (a frame) can significantly help define and develop the concept of the image, and thus develop a complete object…. This is the same for all work, digital media included. Not all work must consider an alternate platform for presentation, but it is important to recognize the vessels through which media work may be presented through and the conceptual implications of such a gesture.

I might be that because the dominating â€œsub-contentâ€ of media work â€“ it’s technology of presentation â€“ that I’ve struggled to find balanced ways to present online work within galleries. The presence of a projection amidst non-projected objects always presents a spatial problem due to the fact that projection not only operates on a flat surface, but also provides spatial awareness due to it’s throw. Thus, the â€œsub-contentâ€ of a projected piece starts to take president over the actual image-content/subject matter of a work. This is particularly the case with work typically shown online since the framing of a work is not only technological but also social. When the net already presents an alternative platform for showing and sharing creative content, media curators must understand how to re-situate the framing of this work to best suit content delivery. I noticed a hesitation in myself to rely on other non-media objects to galvanize a show for the purpose of spatial continuity since I had confidence that projection, screens, and computer based artworks could maintain that togetherness through a shared media-frame. 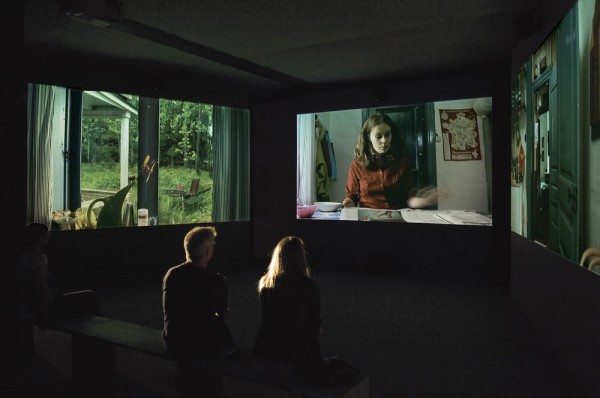 Through these recent experiments in installation tactics, I found that there is an unexpected reliability and expectancy for physicality to substantiate a work – or else to give any ephemerality of a medium some sense of belonging within the gallery. A common strategy that I’ve recently seen is to turn projection into more of an object has occurred in Eija-Liisa Ahtila‘s multi-screen installation of her work The House at the Art Institute of Chicago as well as a recent show curated by Scott Wolniak at Andrew Rafacz. In these instances, it appears as though the projected image cannot sustain enough attention and must be presented on a apparatus akin to a billboard in order to convince an audience of it’s uniqueness. Perhaps through creative pseudo-site-specific installations of video screens and projected surfaces, the willingness to view the work as a unique object is more obtainable.

My own willingness to surmount the novelty of technological pieces within a gallery is perhaps giving my audience to much benefit of the doubt. Although I am quite willing to allow for a media-only show to â€œstand-upâ€ against those that contain no such work of that kind, curators and organizers from other backgrounds might not be as eager to mount a show exclusively comprised of media/screen artworks. This might also have to do with an unrelenting faith I have in the work that I want to show, and the dialogs I hope to create between works when presenting them in group exhibitions. For me, the power of the works have already surpassed a limitation of the framework in which they originate. I often don’t think of them as media work at all, or even work dependent on specific technology, but instead I consider them an amalgamation of ideas or concepts wrapped into visual casings. Installation obviously radically changes my perception of a work since the materiality of that presentation plays an equal role in any given works effectiveness. 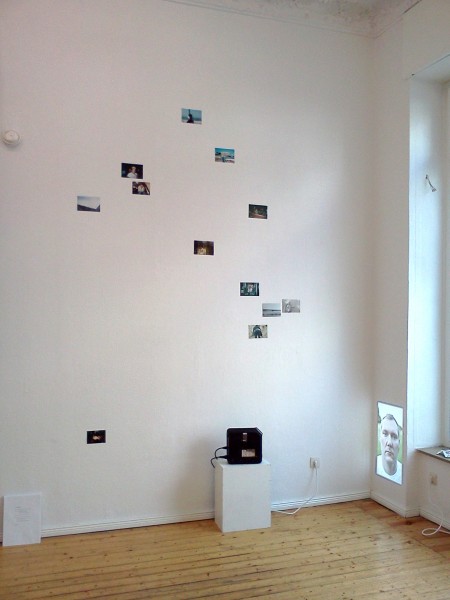 After working on A Small Forest I encountered similar spatial/installation concerns when working with Mike Ruiz and Adan De Le Garza for the mounting of a show at The Future Gallery in Berlin entitled Youth Culture. We quickly found that the media heavy show that Adan and I had put together could potentially turn into a stale cubicle of moving images without proper consideration paid to non-digital works acting as counters (or stabilizers) to works displayed on digital devices. The sensitivity of this scenario was also crucial since the thematic structure of the show happened to incur similar aesthetic approaches that when paired in close spatial proximity to each other seemed dangerously visually redundant (i.e., works with faces/people, works with abstract geometry, etc.). The immediate concern was that if all the work existed within too obvious a framing then nothing would extend beyond the initial reception of a leaned or projected image against a flat wall/surface. We agreed that a sculptural object would interrupt the fear of a static show comprised of only wall-hanging objects, but whether projection and digital presentation necessitate the same sculptural balance for me was partial evidence of how media still exists in a state of unease within a gallery/fine-art context (even in spaces like The Future Gallery that specialize in showing media art).

After several trial and errors we found a layout that worked well, giving non-media work space to breath, as well as utilizing the floor space of the gallery. However, almost a week after the opening, I’m still curious how my expectations of media installation within a space are being informed by the apparatus’ that are currently available. Perhaps this whole series of problems has something to do with the increasing readiness of smaller/DIY/apartment venues to have access and/or acquire equipment necessary to show media based work. Since so many younger artists are working between screen environments and physical spaces the integration and incorporation of media-objects into a show will not only become necessary but it will undoubtably become less cumbersome for curators. But what is at stake here is not just an acceptance that media-objects will become so common place in both museum and gallery contexts but rather that within this transition period (if one can call it that, since so many galleries already have media specific shows) an attempt at reconciling how media-objects not only serve as surfaces but also as spaces needs to become a more open conversation.