Hyperjunk: Netart out of the Past 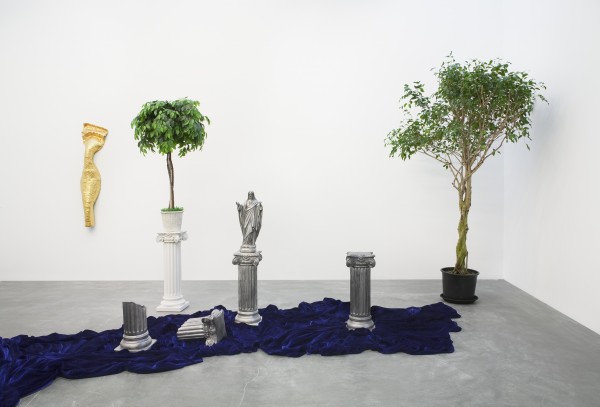 While in New York a couple of weeks ago I had the great pleasure of hanging out with artist Michael Manning and visiting the New Museum’s Linda Bengalis exhibition. While navigating the show, I turned a corner to be faced by the above work, looked back to Michael and quipped, “Looks like netart.” Although Michael and I had a brief laugh about this while walking out, we lingered on the topic for a while longer and reflected on how we both felt that certain visual tendencies within the netart community were honestly located in a larger art historical context. I think we both (sorry Michael if I’m speaking for you) felt a sense of weighing the immediacy of network exchange/activity against the distance of history within our work, and attempting to navigate a synthesis between these two considerations is a daunting task for art produced and distributed online.

Since then I’ve given my joke a bit more thought and was reminded of the sentiments Michael and I shared when I read Karen Archey’s recent review of the Read/Write show at 319 Scholes. Specifically I was brought back to that conversation when I read:

Iâ€™d argue the worst end of the show looks like a bunch of poorly aestheticized inside jokes originating on the web… Herein lies the failure of this newer generation of internet art, emblematized by Read/Write: curating exhibitions or creating work based on social networking privileges the agitating and personal while occluding the conceptual and political, especially to an audience outside that social network. Further, the insularity of that network has bred likeminded aesthetics rather than a shared politicsâ€”while the most successful works reach outside this trajectory.

I can’t speak for all of the work at Read/Write or even the original work presented by jstchillin curators Parker Ito and Caitlin Denny, but while being present at the venue during the installation, I had very few moments of feeling as though the work shown was generated from an isolated locations of net-humor or facebook comment threads. I completely understand that this privilege skews my perspective of the work, and I don’t think I can reasonably expect critics and cultural commentators to always have this type of access to a community. In fact, I agree with Karen about net-based work being hindered by it’s narrow vernacular and at-times obscure methodology (although I think this opaqueness is mythologized more by the rest of the art-world then the makers themselves). However, I’m not convinced that this perceived exclusivity is limited to Read/Write. This being said, I’m also not willing to claim the entire art world is at fault. But since my conversation with Michael (and, truth be told, with many others), I’ve been attempting to draw aesthetic and ideological similarities between work/ideas/jokes in Read/Write and other recent (or distant) art histories that exist offline.

I must admit that the following pairings should not be taken as factual evidence for net-based practices consciously working within a larger scope of art history. But I do think these comparisons could help identify some visual frequencies that continue to resonate within contemporary screen-based practices. By giving this contemporary work some benefit of the doubt, I hope to bring the visual elements that exists between communities and generations into a conversation about the potential political and conceptual underpinnings that these works also share. This is not to say that the ideological concerns of contemporary art are still mired in the politics of a previous movement, politik, or fad. However, exposing shared conversations and conventions might help elevate and promote the work made by a new generation under heavy scrutiny.

One visual similarity that has peeked my interest as of late is between Sara Ludy‘s Projection Monitor project and the paintings of Edward Hopper. Ludy uses Second Life to photograph empty foyers, vacant windows, awkward textures plastered on obtuse geometry, and poorly modeled house plants. When viewing all these spaces together, or in their sequence of presentation, one observes a delicate investigation into the interior spaces of the virtual world and how alienating they can be. Hopper likewise utilizes the streets of Brooklyn and remote scenes by the beach as locations for a similar kind of isolated introspection that Ludy investigates. In some sense the artificiality of architecture and space flows through the pictorial plane of each artists work. With Ludy, the artificiality is a a inevitable characteristic of the infrastructure of SL whereas Hopper’s portrayed contrivances are of a failed American urban planning. This being said, when the remoteness of Ludy’s depictions rely on a absence of fellow users Hopper instead uses shrouded models and characters that face away from the easel as his chosen instrument for illustrating distance.

Coincidently on the same New York trip, I went to PS1 and had the pleasure of sitting in the small yet intimate Modern Women: Single Channel exhibition of women artists working in video between the 60s and the 90s. Although less than a dozen women are represented on the 20 some-odd TVs, I had the immense joy of re-watching videos that I had seen many years ago with somewhat fresh eyes. Combined with the lingering conversation from the Bengalis show still at the front of my mind, I couldn’t help but immediately link the meditative and hypnotic similarities between a recent work by Brenna Murphy and Steina Valsuka’s Violin Power from 1978.

In this particular instance I find it hard not to draw a comparison between the ideological and structural components that the two makers have with one another. The technological experiments that Brenna and Steina explore are each very indicative of their time; they show attempts at grasping a current location in technological times through experimentation with “the new.” Even though Steina clearly has a technological (and virtuosic) advantage over Brenna, this limitation of gadgetry and lab facilities doesn’t dissuade the younger artist from experimenting with the available technology of her immediate surroundings (namely a webcam or consumer/prosumer camcorder and a simple non-linear editing program). In this way, Brenna’s piece exemplifies one of the most telling aspects of work made under the netart moniker: using available, often times consumer-based, technology to critique the defaults of visual culture that occur as a result of constant digital saturation. Through abstracting the self, both artist take on the role of engaging what they know to be biological – their bodies – and attempt to find an equilibrium of feedback between themselves and the appliances of their time.

Although Michelle Ceja and El Lissitzsky have very little in common when it comes to cultural and ideological creative production, the similarities between their aesthetic is unmistakable. Ceja’s work repeatedly draws from the visual vernacular of the early Russian avant-garde movements that later heavily influenced the Bauhus and De Stijil schools. Both Lissitzsky and Malevich provide ample visual cues for many net-artsits working with three-dimensional forms and installations. The angularity, stark color palette, and use of negative space that Supermatism artists employ reoccur in many instances of net-based visual works. Ceja just so happens to be the best example to illustrate this point, probably because her work is so visually refined. The relationship between these two histories is dubious, especially when considering the propagandist tendencies of Lissitzsky and his peers, but the correlation is too striking for me to avoid.

In preparation for this article, my research led me down a number of interesting tangents and speculations about the common visual tendencies cropping up outside of the domain of what is considered netart. I feel that some of the frustration, hesitation, and angst about work coming offline and into space comes from the constricting categorization that plagues netart as a term. The “post-undergrad” artists that Karen identifies might be struggling with the concept of migrating conversations between screen space and white cubes, but that doesn’t necessarily negate the conceptual frameworks that guide and support these contemporary practices. In a way, it’s hard to concretely say how one can “solve” this dilemma, or even if it’s something demanding explanation and deciphering. However, being able to make these historical connections might provide cultural commentators, art enthusiasts, and makers with some leverage and accessibility that can alleviate some of the current criticism.