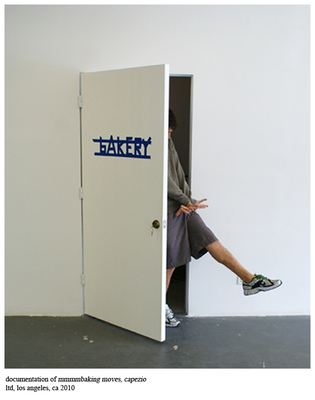 This week: San Francisco checks in with a discussion with Aaron GM and Ginger Wolfe-Suarez

In this episode Art Practical contributors Zachary Royer Scholz, Elyse Mallouk, and Patricia Maloney speak with artists Aaron GM and Ginger Wolfe-Suarez. This was one of several conversations held over the weekend of the fair as part of â€œIn and Out of Context: Artists Define the Space between San Francisco and Los Angeles,â€ a program that invited artists to consider the two cities as a continuously evolving constellation of dialogues, shared interests, and overlapping approaches. An abridged transcript of the conversation can be read on Art Practical.

Aaron GM lives and works in Los Angeles. He studied at both San Francisco Art Institute and UCLA. Recently he exhibited a solo presentation at the NADA Art fair in Miami Beach (2010). Other Recent solo exhibitions include capezio (2010) at ltd los angeles, Timeshares (2009) at Parker Jones Gallery in Los Angeles, and sales calls(2008) at Blanket Gallery in Vancouver. Aaron has shown in group exhibitions both nationally and internationally.

Ginger Wolfe-Suarez is an emerging conceptual artist, writer, and theorist. Her work often takes the form of large-scale sculpture, exploring the psychology of built space. Both an exploration into the experiential phenomena of body-object relationships, and a questioning of the material nature of sculpture interweave concepts of memory and process. Wolfe-Suarez teaches studio critique and art theory, and is currently Visiting Faculty in the graduate program at San Francisco Art Institute. Her writings on art criticism have been published internationally, and her artwork has been recently exhibited at Silverman Gallery, ltd Los Angeles, KUNSTRAUM AM SCHAUPLATZ in Vienna, Artist Curated Projects in Los Angeles, Mills Art Museum, Yerba Buena Center for the Arts, and High Desert Test Sites, among others. She studied at Goldsmiths College in London and later received her BFA from The School of the Art Institute of Chicago, and her MFA from the University of California at Berkeley. Wolfe-Suarez lives and works in Richmond, CA, where she raises her three-year-old son.