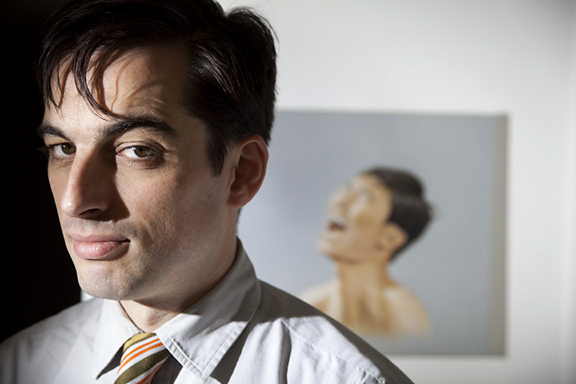 This week: As part of the Art Los Angeles Contemporary art fair, which took place January 27-30 at the Barker Hanger of the Santa Monica Airport, the crew from Art Practical produced â€œIn and Out of Context: Artists Define the Space between San Francisco and Los Angeles,â€ a series of conversation that imagined the two cities as â€œa continuously evolving constellation of dialogues, shared interests, and overlapping approaches.

In this episode Patricia Maloney andÂ Art Practical editor Victoria Gannon chatwith San Francisco-based artist Luke Butler, again in the parking lot of the Santa Monica Airport, as part of their ongoing quest to find a quiet spot away from the bustle of the fair. Butler reflects on his longstanding admiration for Captain Kirk while Patricia and Victoria wonder if heâ€™ll suddenly start speaking in Klingon. Later, Patricia andÂ AP editor Tess Thackara speak with artist Sarah Cain about her years living and working in the Bay Area before relocating to Los Angeles, her working process, and the oases she finds in LA.

Luke Butler received his MFA from California College of the Arts in 2008. Heworks in paintings and collage; much of his imagery comes from pop culture, most often from television and movies of his childhood includingÂ Starsky and Hutch andÂ Star Trek, along with other iconic images, such as that of former U.S. presidents. Butlerâ€™s work was included in the 2010 California Biennial at the Orange County Museum, Newport Beach, CA. He is represented by Silverman Gallery in San Francisco, CA.

Sarah Cain received her BFA from the San Francisco Art Institute in 2001 and her MFA from the University of California Berkeley in 2006; she attended Skowhegan in 2006. Her work has been exhibited at the San Francisco Museum of Modern Art; the Santa Barbara Contemporary Arts Forum; the Orange County Museum of Art, Newport Beach, CA; KN Gallery, Chicago; and the Seiler + Mosseri-Marlio Gallery, Zurich. Cain received a Pollock-Krasner Foundation Grant in 2007 and a SECA Art Award in 2006. She is represented by Anthony Meier Fine Arts, San Francisco and Honor Fraser Gallery, Los Angeles.