……Balloons in the Sea : Mark Booth at ADDS DONNA 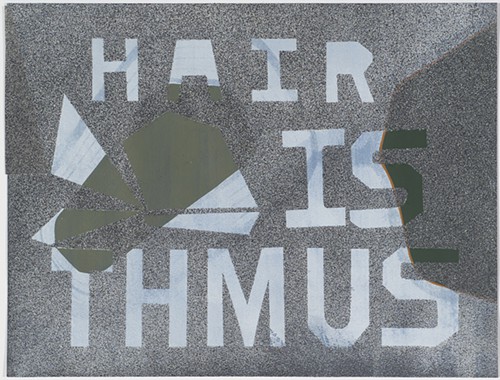 We still have noÂ real idea what the narwhal horn is for. Of course it isn’t really a horn, either. It’s a tooth or a tusk like that of a walrus or elephant. It grows up and out in a spiral. At first they supposed it might be use to break holes in the ice, or spar with other whales. Because female narwhals don’t often have these protruding teeth (though some do, and some rarer males have two), they are believed to be “secondary sexual characteristics” used to woo and impress prospective mates. That said, in 2005Â scientists discovered narwhal tusks are opposite to our own: whereas our teeth have a hard protective enamel that covers the softer, nerve-ridden pulp, narwhal tusks are hard on the inside with 10,000 nerves worth of sensitive soft stuff exposed to atmosphere. This, combined with the acknowledgement that no one had ever seen such behavior, discouraged the tusk-as-rapier idea. It was thus concluded that the sometime 10-foot tooth might serve as a thermometer/barometer/measurer-of-salt. It’s possible this tusk is used to communicate, bringing to mind an antenna. Nevertheless it’s speculative. We still canâ€™t say whyÂ this whale, as opposed to others, would have such a specific tool. In Mark Booth’s exhibition,Â God is Represented by the Sea, a wall drawing tastes the tusk, as though to unlock its mysteryÂ that way. Three of the four walls are covered in a narrative that includes, “I attempted to trace one furrow from the horn’s root to its tip with my tongue. During this process of investigation my taste buds became inflamed and swollen, calling to mind an undulating colony of sea anemones.”

ADDS DONNA is a long, narrow gallery with high ceilings. At first glance, Booth uses the space economically. There is nothing on the floor. Rather, smaller paper works hang near and above the door; likeÂ Hair Isthmus (above), these drawings are spattered, star-like reliefs of textâ€”written in the same font as theÂ text that lines the walls. On the wall, gray-blue vinyl letters describe the narwhal tusk, the way the narrator accessed it through “a purveyor of experience” and the narwhal’s curious smile. AtÂ firstÂ I didn’t see the inconsistencies in the font, assuming it, like most institutional lettering, was created by a computer. But slowly, as I stood letting my eyes wander over the letters, I couldn’t place the font. The O’s were curious, octagonal blocks and, like the A’s, B’s & D’s, did not have central holes. I then noticed that the octagon’s corners were not all at the same angle. It dawned on me then that every letter had been cut by hand.

It used to be that people hunted narwhal tusks for Kings and Queens, as evidence that unicorns existed. It was so much more plausible to imagine a horse with a horn than a whale, the idea of unicorns persisted. Can you imagine?Â Someone says to Another, “Unicorns donâ€™t exist.” The Other, “Where do those horns come from?” The First, “Whales.” The Second, “Shut the fuck up.” But this is the way of the sea as it always has been. A dark, intemperate body, full of mystery: a field that woos the Romantic.

Perhaps it is true, the only way to comprehend itâ€”even slightlyâ€”is to ingest some part of it.

Text has authority. The codified system of communicative terms is an institution;Â it parses our experience, mapping a common ground that necessarily diminishes the importance of what cannot be conveyed in order to protect its own cohesion. An inherited legacy, like any other culture, cheese, bread, alcohol, yogurt : these things propagate meaning by facilitating relationships and values. They are nutritious, while themselves evidence of sophistication and art. Perhaps we could add to these, myth and ritual, as we focus on the way in which these artifacts of tradition are nevertheless dynamic and alive. They are not static as institutionalized text-on-a-wall might have you think. The hand-cut quality of each letter reminds us that this is a story; it could be a dream or it could be autobiographical, historical or fictitious. It could be a long lie. The potency of this category lies in its reproduction. The bacteria of a particular cheese is given as a gift in order to be reproduced in some other country. At a party none of us are invited to, someone retells Booth’s story, as though it was a personal experience. These tales can be repeated and through repetition they can change. The elemental letters that comprise their content are themselves dynamic and unstable.Â God is Represented by the Sea investigates text as it undermines the authority of language, where ideas hang like balloons to be consumed, sometimes on paper , sometimes on the wall and sometimes in the air.

First the guess artist told a story about a man-faced fish that lived in a green pond on a large estate during the Napoleonic Wars. Napoleon’s army happened to pass through that part of the world and he used briefly that estate as a command post before one or another of the famous battles in which he refused to take anyone’s advice and went his own implacable way.

â€” Below, said the man-faced fish, it is neither day nor night.

The Way Through Doors, Jesse Ball

The quoted passage above is told from within a labyrinth underground. The characters are about to take a rest for the night. The literal labyrinth they are in mirrors the narrative labyrinth Ball leads us through.Â The Way Through Doors world is not stable, but constantly shifts as in a dream.

Booth’s world is similarly shifting. As the cadence of his voice bears us along illogical conclusions, the path is nevertheless pleasing and so you drift along, without necessarily having to take responsibility for the consequence of your passage.Â But of course this show is also about Art. The tasting of the narwhal tusk takes place in a Zoological Museum. It is about the authority of spaces and texts and contexts. It is about our relationship to history, evoking, perhaps, the delight gleaned as we eat the myths of our predecessors, draining their nourishment in order to fuel our own expressive desires. The sequence of cannibalisms, so far taken for granted, as to remain dreamlike, impalpable, labarynthian.

The name “narwhal” comes from the Norse word “Nar” which means corpse. Literally translated they would be “Corpse Whales.” Contemporary peoples have looked back on this, supposing the whale’s propensity to float, unmoving, on the ocean’s surface for endless hours as well as their discolored, spattered skin inspired the name. It is likely that, when found in the middle of nowhere on a flat, frigid ocean, days away from land and wind, these creatures astonished mariners as monstrous ghosts, gripping their hearts with uneasiness. However, on closer inspection instead of finding horror they found the narwhal’s habitual smile. “Even in death, this enigmatic smile reflects the narwhal’s reception of continual, unexpected pleasures,” (Booth). 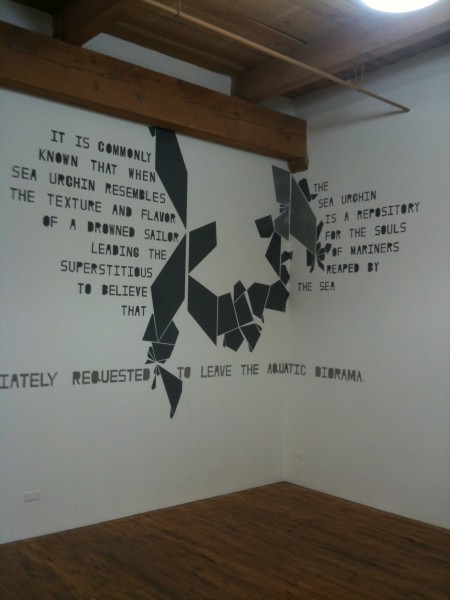 The final piece in the last corner:

It is commonly known that when the sea urchin resembles the texture and flavor of a drowned sailor leading the superstitious belief that the sea urchin is the repository for the souls of mariners reaped by the sea.

â€” God is Represented by the Sea, Mark Booth

Bas Jan Ader disappeared in the sea while searching for The Miraculous.

Perhaps in this dream, you are eating Bas Jan Ader.