Scott Wolniak was the proprietor of Suitable, an alternative (garage) space in Humboldt Park, from 1999-2004. He started the space after receiving his MFA from the University of Illinois at Chicago and ended it when the roof collapsed. The goal of Suitable was to provide young Chicago artists with an opportunity to show their work. Recently, Wolniak curated a show at Western Exhibitions consisting of videos that had been seen years earlier at Suitable. In conjunction with the exhibition, Suitable Video, Wolniak released a limited edition compilation of the works under the same name. Suitable Video: Volume 1 has a run-time of about an hour and includes work from Charles Irvin, Julia Hechtman, Sterling Ruby, John Neff, Kirsten Stoltmann, Marc Schwartzberg, Paul Nudd, Reed Anderson & Daniel Davidson, Sarah Conway, Miller and Shellabarger, Ben Stone, and Siebren Versteeg. 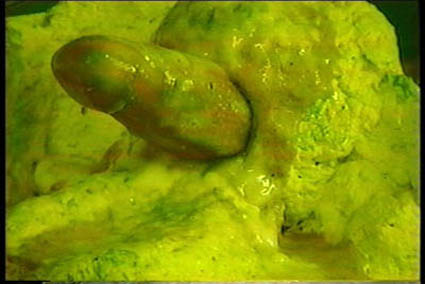 Sterling Ruby’s contribution, Cook, is a one minute montage that combines several documentary-style sequences of clandestine meth labs while a distorted voice over repeats, “I’m a chemist, I’m a cooker, I’m a manufacturer, and a distributor. I’ll do whatever the fuck I want in the privacy of my own home.” The phrase is oddly catchy and I found myself singing it throughout the day. Paul Nudd’s Wurmburth also stuck with me, out of disgust, it’s really gross. I said this to a friend and she asked “Gross-sexual or gross-dirty?” For three minutes an amorphous phallus goes in and out of various neon green caverns, while smoke, mucus, and spit ooze out. It’s both dirty and sexual. The piece I enjoyed most was Untitled (Nixon/HAL) by John Neff. In it a man gives two monologues against a solid blue background. The first is a statement that was prepared for President Nixon in the event of a moon disaster and the second is HAL’s final monologue from 2001: A Space Odyssey. The melodrama and humanity of the texts are rendered emotionless by their messengers, creating an amusing tension.

I was a film student at the School of the Art Institute of Chicago and I recognized a few of the pieces from my video classes. During my senior year of college I wouldn’t have considered Sterling Ruby young, Chicago-based, or in need of exhibition opportunities. When I saw these works at school they were presented out of context, completely removed from the community that is very apparent when I watch the Suitable Video anthology. “There is no thematic or conceptual agenda,” Wolniak acknowledges in his curator’s note. “There is a tangible sense of utility in much of the workâ€“ they do not seem fussed over, they communicate directly.” Unfussy, direct communication is a fitting theme for a compilation meant to encapsulate the efforts of a DIY exhibition space. These type of spaces pop up when a group of artists, with the help of their most entrepreneurial peers, need the most immediate way to connect with an audience. Alternative spaces stop being effective once they fulfill that need and when they close their doors, they take that history with them. Last year’s Artists Run Chicago at the Hyde Park Art Center was one way of telling the history of alternative spaces, Suitable Video is another.

Suitable Video: Volume 1 is available at Golden Age in Chicago. 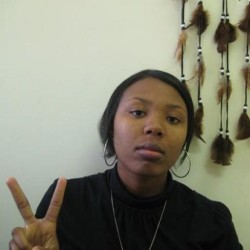 Martine Syms
Martine Syms is the Director of Golden Age, a project space in Chicago, Illinois dedicated to sharing ideas through exhibitions, performances, and printed matter.