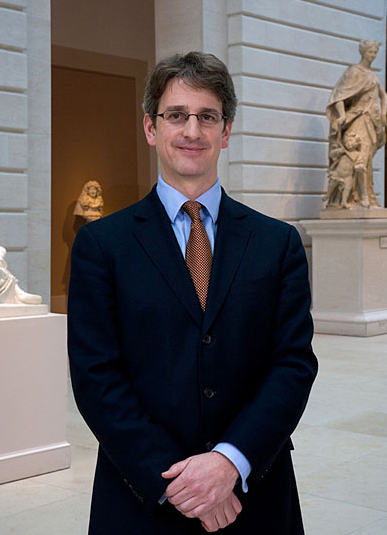 Director Thomas P Campbell who took over as Director of the Metropolitan Museum of Art in New York 18 months ago speaks out in an interesting interview on how he sees the new landscape of Art and the public’s relationship to it and how he is looking to position the Met to best fit in that world.

The Met has long had a distant relationship with Contemporary Art for half a centurty now almost and Campbell talks about that shifting possibly since Â he feels there is more of an audience for it then before and there is enough context to properly align it with the 5000 years or more of collected art under the Met roof.

Most interestingly Campbell talks aboutÂ ContemporaryÂ Art as being the first step in a “fundamental shift” in the Met’s operation and presentation of displays. The goal in making them more accessible and a less steep knowledgeÂ prerequisiteÂ to even simply engage shows. Saying such things as:

â€œWe assume people know who Rembrandt is, for example. We have wonderful, thoughtful labels next to each Rembrandt painting, but thereâ€™s no overview of who he was and, frankly, considering our international audience, I doubt whether many of them do know who [he] was, or the significance of a particular period room, in a broader context.

â€œWhat Iâ€™m trying to do is to get the museum rethinking the visitor experience from the moment that people arrive at the museum: the signage they encounter, the bits of paper they pick up, all the way through to the way we deliver information in the galleries. And obviously thatâ€™s an enormous task. Weâ€™ve got a million square feet of gallery space and tens of thousands of objects on display, so nothingâ€™s going to change overnight.â€

Thomas Campbell who is not looking to do anything radical with the Met’s conversation and was largely apointed for that reason among others is also someone who sees the writing on the wall a bit it seems when after trying to describe a Titian bacchanal to a Italian teacher at Christie’s to no success with typical termiology shifted gears to saying:

To which the point hit home and Campbell said his lesson from that was:

“Academia at its best embraces and speaks to a broad audience”

It will be interesting to see where he takes the self described â€œinward-looking” culture that permiates the Met currently and many organizations in the Art world.

More can be read here