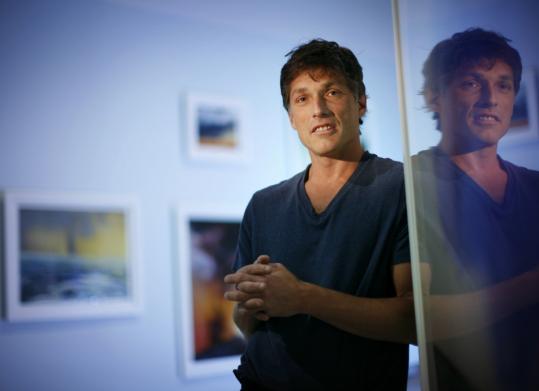 This week: Tom and Duncan talk to super-talented painter Alexis Rockman. There is a Smithsonian retrospective
that opens this month so check it out.

The following stolen from the Greenpeace site:

Alexis’ paintings visualise the hopes and popularly held fears about scientific progress and the wide-ranging effects of human intervention on animal species, ecosystems, and the natural world.

We are brought face to face with a future that is at once surreal and unsettlingly familiar. Mutant animals, geometric landscapes, alternative environments either sterilized by science or unredeemably altered due to pollution. All this makes for some uncomfortable viewing.

“My position is one of ambivalence as the horse is already out of the barn so to speak; it is not biotechnology that is the problem but corporate America or globalism or colonialism. The implications of using this technology are far more devastating because of the unknowable effects. This is something that is very disturbing and visually compelling to me,” explains Alexis.

Despite the questions that Alexis’ work throws up about humanity’s role in shaping a dystopian future, there’s no obvious judgement in it.

Every element in the art is painstakingly researched. All the biological images have been developed through extensive collaboration with specialists in molecular biology, genetics, natural history and medical science.

“I really have to say these are relatively neutral images even if I use information that tends to make people feel uncomfortable. But I don’t see that as negative. I try to show things that are obviously familiar but also inform them with as much cultural and scientific history as I can, so that they are credible.

“The stuff that may not be noticed – for instance the geometry of the landscape in ‘The Farm’- to me is far more scary than an albino hairless mouse with cartilage growing on its back. I am also trying to make an emotionally resonant image that reaches people. I try to make it as credible as possible without making it boring.”

Alexis is aware of the political power of his work. As an American, he believes he is well placed to bring attention to the consequences of his homeland’s environmental, economic and political policies.

“I am of a generation whose relationship with the government and big business comes out of a post-Watergate scepticism. How could my work not have a political effect? I feel like I am in such a privileged position I would find it unconscionable if I didn’t take advantage of that as someone who cares about these issues.”

Collectively, the paintings presented in ‘Wonderful World’ offer a graphic vision of a bio-engineered near future in which human and animal bodies, crops and plants have been genetically altered to suit a variety of needs – whether commercial, aesthetic, medical or gastronomic.

Despite the potentially complex nature of the exhibition he makes a point of not being elitist, as his subject is something that touches every person on the planet.

“I don’t expect anyone to know anything. That is why I am a populist. If I have a show and people from different demographics come to find out about global warming, I don’t want to lose half of my audience due to my arrogance. It has to be decipherable to a six-year-old child. I try to construct it as an onion with different layers of meaning and iconography.”

The negative consequences of industrial and technological progress are rarely addressed in a modern culture fuelled by the products of multinational entertainment conglomerates. Alexis’ paintings hang out on the edge of complacency, forcing us to confront a vision of the future implicit in the choices we, as a society, make today.

This weeks show is dedicated to the memory of Penny Zeidman.