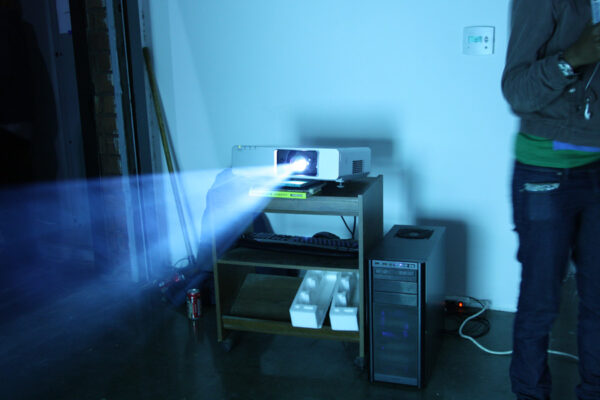 This past week I had the immense pleasure to be involved with the Los Angeles instance of Bring Your Own Beamer, a one night event initiated by artist Rafael Rozendaal where artists fill a gallery/venue with images beamed by borrowed or self-owned projectors. I also had the great chance of talking to BYOB LA organizers Chris Coy and Guthrie Lonergan to talk about how the evening unfolded, as well as how there already has been some much heated conversations regarding what these events facilitate. We’re joined by Artie Vierkant, who participated in both the LA and the NYC versions of this project, to discuss some of the recent criticisms of this type of impromptu self-organization, but also to have a kind of debriefing of our feelings and thoughts about how things went last Friday.

We specifically discuss articles published by Brad Troemel and Karen Archey on Karen’s new art criticism and review site Bien-Pensant that respond to the potential emerging issues that are coming out of the conversations that surround BYOB-like shows; namely, what/who are these events serving, and how can artists approach these settings with equal parts enthusiasm and criticism. The four of us talk about the attitudes and feelings that we each had about BYOB LA, and discuss how these situations are initiated as part of an ongoing conversation between a large community of diverse artists working online (or working within the “internet aware” classification that has been circulating).

Through our conversation, we decide that to overly contextualize the practices as a sum whole would do a disservice to the powerful differences that separate and differentiate creative practices exhibited within BYOB thus far, and that leaving the discourse open and in constant renewed upkeep would be essential in maintaining a dialog between each other. Below is the chat log of our discussion, as well as a short video that tours the BYOB LA event.