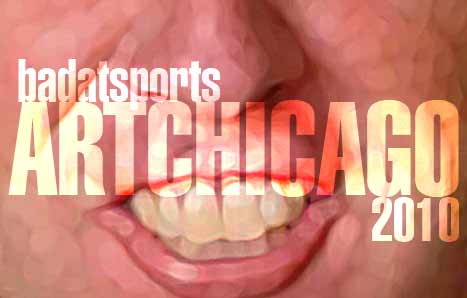 Well it’s almost that time of the year again, High Holy week in Chicago where we allÂ pilgrimageÂ to the Merchandise Mart and endlessly complain how much we don’t want to be there. Which is kind of a shame really? The doors haven’t even opened,Â exhibitorsÂ are still unloading their wares (oh I’m sorry is that word verboten? 🙂 and there is already a collective shrug/ennui working it’s way from gallerists to collectors to The Tribune. I am not suprised, unaware as to why or in disagreement really. The only thing less exciting then spending money on a show during a depression (oh those words again) that is collectivly expected to be poorly attended, poorly reviewed, have low sales and be generally as exciting, sharp & sexy as aÂ slightlyÂ used chew toy is to not have one at all and instead we all stay home cleaning our patio decks/yards. It’s not that I don’t get it, I do. Make the best of it, stay together for the kids, you go to war with the army you have not the army you want (yea don’t like the taste of that phrase do you lol).

In a little bit here I am going to lay into the Mart over something and I am sure it will not be the first or last time that either I, Meg, Claudine,Â The Tribune, Rhona HoffmanÂ or some prairie dogÂ on the net uninformed or unfairly chimes off but before I do does anyone remember the word “Fun”?

If you work in the Art world in any capacityÂ right now you could be easily making a better salary in sayÂ Print on mean average so if you’re still here it’s because you love it, chose it & in fact tell everyone else it chose you. So if we are not going to make a fortune, redefine art for theÂ hundredthÂ time this Century, rock the culture with something new or even agree what is the new Deer, Squid or Skull for this year can we at least agree to have some fun? I’m not saying fiddle while Rome burns.Â Do your dueÂ diligenceÂ and once that is done, share a laugh, have a meal with a large group, drink, dance, Â greet old friends from out of town or even Continent but cut the emo angst and smile (Even you Scott Speh).

Arts a joyful struggle, it never becomes a breeze & it is never the way we want it to be 100% so in the gap between perfection & worthlessnessÂ letsÂ rememberÂ why we got into this and have some funÂ cause everyone from the unpaid gallery interns to ChrisÂ Kennedy is working hard believe it or not, I know.

Having now said that, there are reports coming in that the Merchandise Mart is looking to charge the exhibitors $49.99 a day for wifi access. Now I have personally worked to provide wifi access for over 100 exhibitors in a large space and can say it is a thankless task that is readily abused by 10% of the users, requires constant oversight if you have power fluctuations of any sort, isÂ consistentlyÂ reported down when in reality it works and the problem is exhibitor’s laptopsÂ runningÂ ChineseÂ drivers, or Macs with more warez then actual programs.

Oh do I have sympathy but $49.99 a day let me say that again so that it sinks in $49.99 a day is “screw off” pricing that you do to chase away clients so that you don’t have to provide the service to many & the ones that you do it’s crazy profit. So is that where the business model is right now with the Mart? Are things so tight that we are looking to cut costs and services or gouge to bridge the gap? If so I am sorry for your troubles but if not this is beyond the pale pricing and even I am going to call bunk on that.

Change it before you open, it’s the best PR you can have with exhibitors stuck in one place for hours on end when you can provide reasonably priced internet. Trust me many would rather surf and email then sell, you think I’m joking but I’m not. There is no excuse for that price point unless we’re talking 10MBs up and down which I almost know we are not.