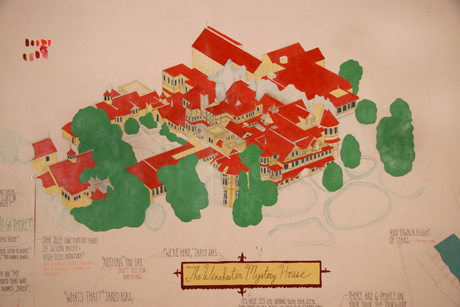 Make sure and check out the Chicago Tribune today for an article about Deb Sokolow’s current residency project with Daniel Boone Elementary School, which is part of Chicago Public School’s “Crossroads” program. Sokolow is helping 3rd, 4th, and 5th grade students create a wall mural that will become a permanent part of the school’s hallways. As is typical for Sokolow, the wall mural will contain a combination of text and images that tell the story of the school’s 80 year history in an idiosyncratic and detour-laden fashion, including, for example, an account of the 1932 murder of Mabel Chenoweth, a woman who owned a candy shop a block away from the school.

Written by Lauren Viera, the Tribune story does a great job of showing how Sokolow’s apocryphal approach to storytelling sparks kids’ imaginations. From the article:

“We started (this project) by asking (the students) to observe their surroundings,” Sokolow explained. “What’s inside the closet on the second floor? What do the halls of Daniel Boone smell like? If it were up to you to redesign the drinking fountain, what would it look like? Almost every assignment left it up to their imagination.”

Third- and fourth-grade classes were tasked with drawing their rooms’ floor plans. Fifth-graders researched the school’s history to write their ghost story, and visual art teacher Gail Locke’s seventh- and eighth-grade students were taken under Sokolow’s wing. Beginning in October, the artist assigned students observational roles ranging from Chair Sketcher and Ghost Recorder to Smell Recorder, and put them to work illustrating their findings.

Some students received instructions to draw what, if anything, might be small enough to live in the announcement-speaker box bolted to the corner of Locke’s colorful classroom. During a mid-November visit, Saad, an eighth-grader, showed me his interpretation. “It’s like a lizard that lives in there, saying the morning announcements,” he said, gesturing to his painting of a green lizard (based, he told me, on the Geico insurance gecko). The lizard is happy at home in the morning-announcement box with his bed, refrigerator and television.

I hope someone will publish images from the project somewhere once it’s finished (hint, hint). I would love to see how this mural turns out. If you want to learn more about Deb Sokolow’s work, you can find her interviewed on Episode 210 of the Podcast.