T of the Town

Once Chicago’s gets a glimpse of the sun, it’s on. What’s the T? has been all over the place in the last two weeks– openings, screenings, weddings, auctions, limos, basements, you name it. We even hit the courts yesterday with the Club Nutz basketball league. I see you Chicago, & you look gorgeous dahling.

In the words of my Bad at Sports cohort, Steve Ruiz, here’s some stuff you probably should have noticed in March. 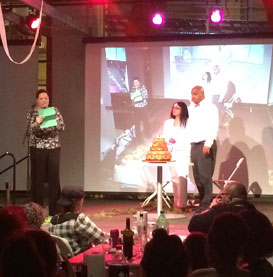 The Unknown Couple with Edra Soto and pineapple upside down cake at the wedding.

The entire week leading up to Alberto Aguilar’s Wedding to Unknown at Columbia College on March 21st, when people asked me what I was doing Friday night I’d reply “going to a wedding.” The conversation would immediately turn weird when they’d inevitably discover that I had no idea who was getting married. 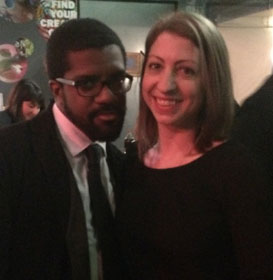 Ross Jordan and Morgan Walsh on the dance floor. 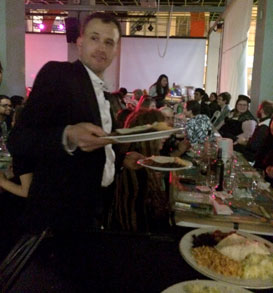 Arriving (late), I was relieved to run into Ross Jordan, outside waiting for his date to arrive. Ross assured me that the scene inside was a regular wedding except that everyone I’d want to party with was there. He wasn’t kidding. 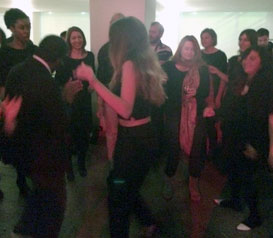 Good vibes abounded and the gusts flocked to the dance floor after dinner & performances. 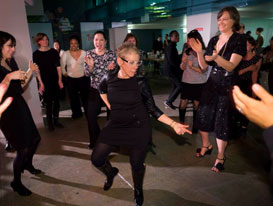 Sabina Ott rivals dancing queen Vincent Uribe on the dance floor. This photo is everything. Werk it girl! (Photo by David Ettinger Photography.)

Choice guests like Edra Soto, Daviel Shy and Hope Esser, Sabina Ott, Tricia Van Eck, Eric May and tons more rejoiced in honor of the couple. That night they were revealed to be Aguilar’s step-sister-in-law, Nina Young and her husband, Charenzo. The Young family stepped in to renew their vows after the original unknowns backed out weeks before the ceremony was set to take place.

We were lucky to catch the tail end of TRANSCEND A LIL’ BIT, billed as “An evening of video, performance, and pasta with Tony Balko & A.E. Paterra” at the Nightingale last Wednesday, March 26th. 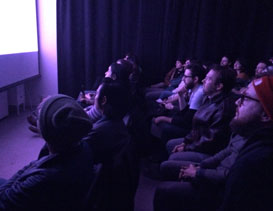 Transcendent full house at the Nightingale. 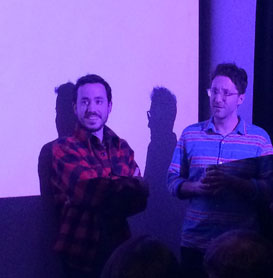 Love to Love You @ Roots & Culture. 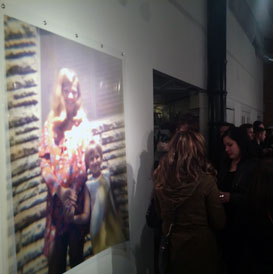 Work by Sara Condo at Roots and Culture.

Sara Condo & Oli Rodriguez are like French fries and ice cream, it might not be an obvious pairing but it tastes oh-so-sweet. Or, at least that’s how Love to Love You, their exhibition that opened at Roots and Culture last Friday made me feel. Everyone else must feel the same way because R&C was totally packed. Despite the crowded gallery I was totally blown away by Condo’s image sampling and Rodriguez’s craigslist ad’s mounted on the gallery walls.

Don’t miss this unique opportunity to spend part of your summer in idyllic rural Wisconsin making art and engaging with fellow artists from all over the world.

Don’t mention it, but a little birdie told us that the application deadline is extended until April 4th, so you really have no excuse not to. 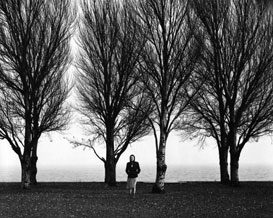 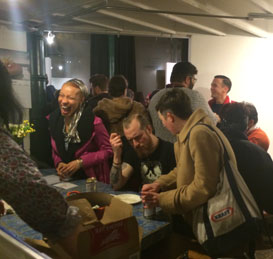 Lots of love going on in the R&C kitchen. Guests were treated to vegetarian dumplings and encouraged to recycle their beer cans by Mr. EZ Livin, Eric May.

Definitely a show that I think would benefit from a second look. 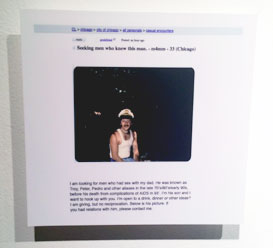 The exhibition is on view until April 26th.

After the brimming Roots opening we were pleased to see a healthy crowd at the basement show that took place later that night at Kissy World (formerly the Pilsen gallery Plaines Project). 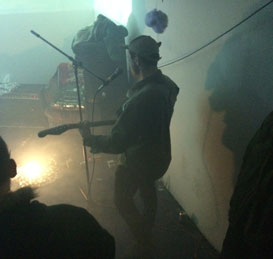 “It was ephemeral, I mean, ethereal.” Vehicle Blues opening the night with some gazey shoegaze muzak.
This video isn’t blurry, that’s just how Vehicle Blues makes you feel. 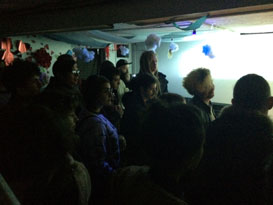 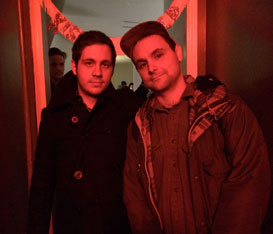 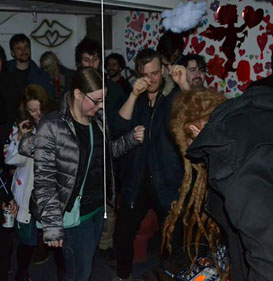 The crowd getting down during the Dim Past set. Photo by Davitt Terrell. 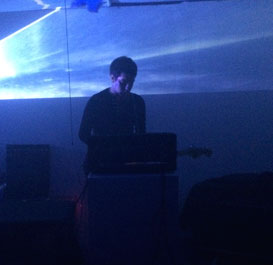 COIN performing through the fog.

Thanks to Kissy World, this show was exactly what last Friday night needed. Terrell also got some sweet footage, including my boy Dim Past playing my fav new song and COIN doing some heavy layering.

Spring Benefit is officially in full swing. First up in our ongoing benefit coverage, the 5th Annual hArts for Art at LVL3. 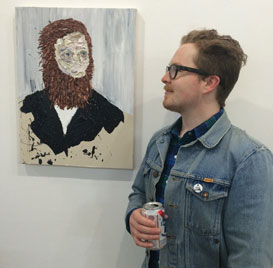 Paul Kenneth with his scary monster Abraham Lincoln-esque painting up for auction. 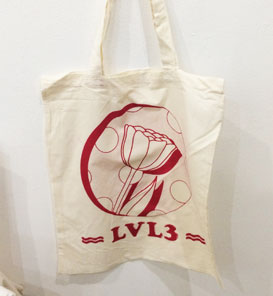 One of the many awesome raffle prizes: a siq new tote designed for LVL3 by Clay Hickson.

Header image features work by Oli Rodriguez in his exhibition with Sara Condo, Love to Love You, at Roots & Culture on view until April 26th. 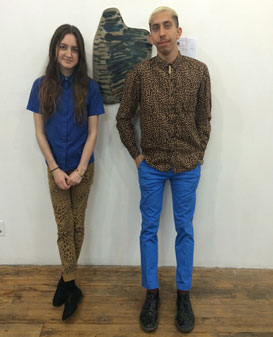 LVL3’s Anna Mort and Vincent Uribe working in unison with the Leslie Baum piece up for auction. 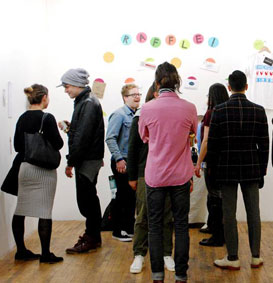 On hand at the auction were Dave Kruger, Caitlin Law and Liz Longo from the night’s featured arts non-profit Arts of Life. Kruger and Longo started off the night by interpreting some of the works up for auction. The two below are so spot on! The auction and raffle ultimately raised over $800 for Arts of Life. 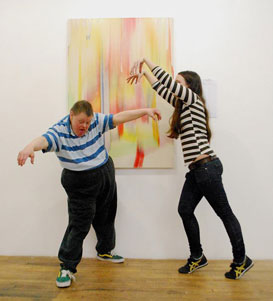 Kruger and Longo interpreting a piece up for auction by Evan Robarts. 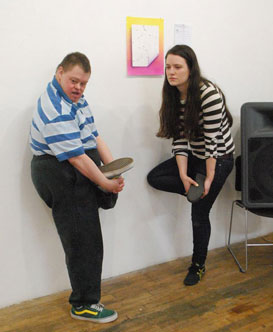 K & L totally working that fold in front of a print by Clay Hickson.

“We gotta use every day of this summer to the fullest”. Tyson Reeder isn’t f-ing around this summer, every above 50 degree day is precious. Meet him on the court for Basketball Bizness. 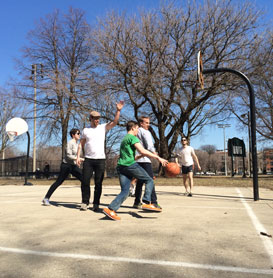 Artists emerging for daytime activities? This photos got us dreaming of more time in the park, summer residencies, Tastee Freeze, tans and long bike rides on the Lakefront Trail. Is The 606 done yet? Bring on the sunshine! 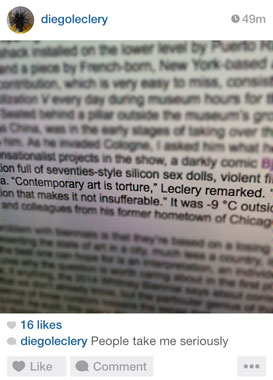