Michiko Itatani’s virtual post-mortem and subsequent rejuvenation of civilization’s master projects at Tadao Ando’s resplendent Wrightwood 659 space has been extended through January, giving Chicagoans an opportunity to see a selection of her elaborate, sometimes bewildering painting from the last 40 years. For the last two decades her work has been nothing less than meditations on Asiatic and European histories, particularly with regard to science and its precursors in myth and folklore. In 2013 I wrote that the artist “rummaged through 20th century chronicles, considering the chaotic hits and misses, the sometimes volatile outcomes and staggering innovations, and then feasted on them,” but her attention to those subjects has included much more than a mere century. She’s driven by the realization that the universe doesn’t care about us so it’s our responsibility to make meaning in the face of what has pre-existed our society for billions of years. Her paintings pay tribute to those who shouldered the weight of theorizing existence for generations of existential threats. 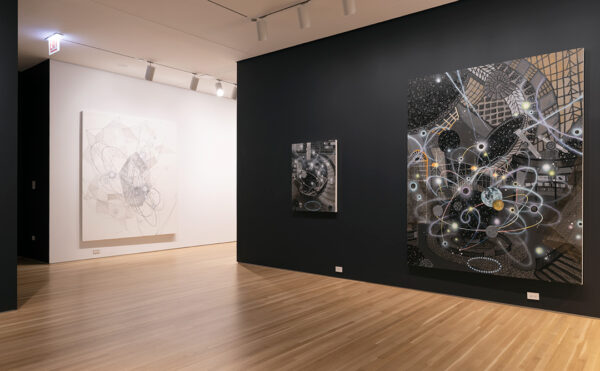 Itatani’s ongoing project, which hypothesizes a visual mantle for civilization’s chaotic production of knowledge, is righteously impassioned, particularly in light of the academically splintered but collectively marketed artworld we occupy. Her immersion into an unconventional historiography and its ceremonial space, as well as the painterly intelligence cradling the topics of myth, science,and mortality, is both real and imagined. The canny passage between radical, constructivist materialism in her early work and post-modernist pastiche in the latter, shapes an atypical definition of contemporary.

Early in her career Itatani produced meditative formal rhythms in drawing, prints, painting, and installation, producing oblique text-reflexive compositions that modified the cadence and contours of sh?ji. Though monochrome and fundamentally abstract, they raised viewers’ awareness about cultural and geographic boundaries and hybridity. These powerful, yet reserved, abstractions that embodied her original space were made up of impasto brushwork secured by soaring passages of finely textured moiré patterns. In composition and surface they correlated to her background as a writer. Lingual and optical, they synched with the contemplative art fueled by the late stages of reductivism and phenomenology.

Post-minimalism, with its rejection of the primacy of the object, then served as a conceptual springboard to embrace the pictorial turn of post-modernism – a bold errand in restless form and ultimately cosmographic design. Turbulent color and struggling figuration came later and finally a collapsing of that dialogue into a hallucinogenic architectural proscenium.

Itatani became proficient in an improvisational pictorialism – aggressive, extravagant, and  arduously detailed. Her practice advanced headlong into a study of world achievements in arts and sciences, absorbing and symbolizing artifacts of civilizations, represented in  hundreds of library and museum special collections. 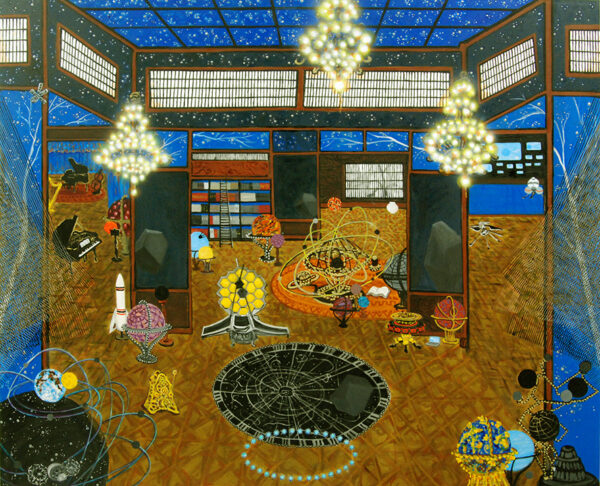 Few artists can bridge the gaps between the influence of the original avant-garde and the late modern and fewer still between the postmodern manipulation of language and ethnography. There are a lot of cracks in that narrative. Itatani’s play of a reclusive outsiderism addresses links between mathematics, philosophy, craft, music, and medicine, while producing a credible spin on the virtues as well as dilemmas of progress and civilization at large.

Historical narratives are ideal, but complicated, for painters. No matter what the image transference to language all we really see in any painting are arrangements of formal syntax. Anything beyond is illusory and unpredictable. We can’t read the artist’s mind and aren’t present at the act of production. Pictures then require a great deal of faith and/or a familiarity with visual theory. Consequently, viewers in real space and time are more critical to the construction of meaning than readers of texts. Such are dictums of modernism and just a few of its inconveniences that haven’t dissipated. Like paintings empirical truths are stubborn predicaments in historical narratives. They’re blank expressions in vast holdings of scientific instruments, musical compositions, architecture, cartography, etc. just waiting to demonstrate the simplest facts and taunt us about our collective illiteracy. 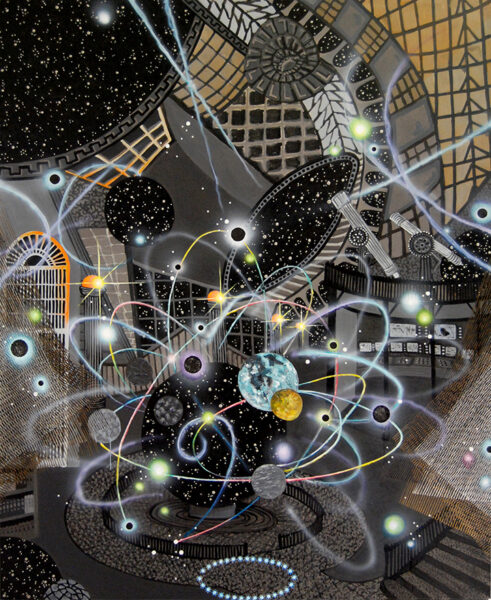 Itatani’s work succeeds because even in its later, hyper-symbolic stages it’s exactly what we see in the flesh and it’s destined to occupy a comparable space in the future as it generates a visual form of oral history. Two camps can appreciate her work for very different reasons – one that accepts the virtual content and the other that focuses on its recurring material reality – the measurable describable truth of them. Her painting unhesitatingly promotes both realities.

The artist’s ability to retain structural identifiers throughout her career is the result of their almost anthropological configuration as code. “Celestial Stage” reveals that the range of content contains plot lines of paint application, color, and scale fluctuation that are biographical. It’s clear that she’s taken those signature features and shuffled the deck to circulate her vertiginous curiosity. Well-rehearsed shadowy compositions, moiré patterns intruding on the periphery, high contrast color, ambient light, and  gestural surfaces identify the artist’s endeavor to mirror language. 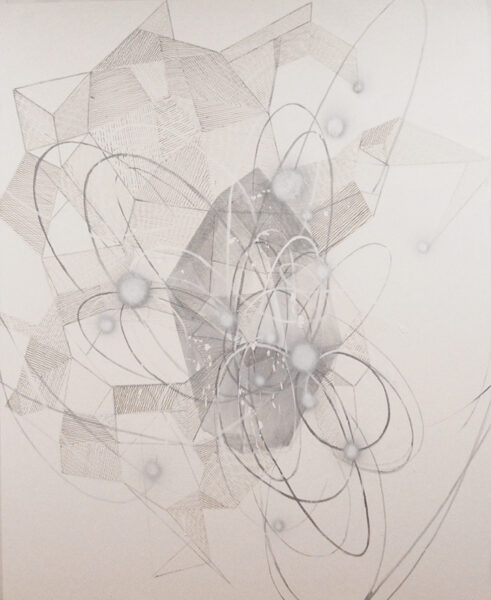 Options for considering how to connect with her earnest fascination with science and literature are sometimes amusing. The punctuation of hazardous vernacular extravagances, where blurred chandeliers and planetary orbits illuminate Rococo libraries and recital halls packed with corpulent furniture arranged on Persian carpets, are untamed and famously indulgent. The addition of ornamental play for her system of pictorialism is a nod to the charisma of folk art – no stranger in Chicago painting. Her staging of technical devices and collection of signs, however, normalize rather than freakify her subjects. Viewers gradually become conscious of the irony of facts becoming fiction as the artist balances uncanny pleasures with a measure of anxiety about what is being substituted for reason in the culture at large.

Fiercely independent, Itatani is one of a relatively small number of cultural workers who drove the Hubbard St. alternative space phenomena in the late 70’s and 80’s. Her “Chicago School” wasn’t a style club but a collective that mentored scores of unaffiliated artists and galleries and unbuttoned the community’s monocultural straight jacket. The behind-the-scene community-building that once grounded her practice in responsible change incubated the spacetime of her current vision and forecast the city’s thriving inventory of visual practices.