Leslie Bellavance searches for capacity, pattern, and agency in an expansive patchwork of modern and contemporary art and literature. Her pictures display critical co-ordinates on a spectrum of detached grammar and buoyant chromatics revealing deep structure as simultaneously beautiful, ordinary, and occasionally mystifying.

For someone who works hard on visual, literary, and political histories bundled with cultural codes and moral philosophy, Bellavance produces contemplative, almost stealth variations on the above. Each subject depiction coincides with a stage in her thinking about photo history and landscape and their manifestation in literature. She makes work from close readings where rhetoric does more than mask the subliminal. She’s clad her most recent work in a hygienic minimalist veneer, where theory is submerged in tastefully colored facades with a gentle rein on visual narratives. Her recent exhibition, interrupted partially by 15 years of university administration, which recently concluded with her position as professor/president emerita at Kendall College of Art and Design in Grand Rapids, Michigan, has resumed in earnest in the Edna Carlsten Art Gallery at the University of Wisconsin-Stevens Point.

Toward the conclusion of a noteworthy academic career that included serving as Dean of the School of Art and Design at Alfred University, Bellavance re-acclimated to the virtual studio practice we’ve come to know in the thick of pandemic, one that suspended and/or delayed normal studio agendas and exhibition schedules. The Stevens Point exhibition, titled “Limina,” curated by Matthew Groshek, was originally slated for 2020. While waiting, Bellavance finished two related bodies of work, one of which is made up of the sizable paper constructions that occupy the long wall in the gallery and is the most impactful. Three monochrome partitions of five paper scrolls are draped like unglued wallpaper from ceiling to floor, reflecting swaths of red, yellow, and blue light, as palpable as the works themselves. Ornamental patterns just visible on the surface are the artist’s re-codification of fragments of early feminist texts.

The light golden yellow drawing titled “Vicious Influence: Homage to Charlotte Perkins Gilman,” consists of five scrolls of watercolor paper, roughly twelve by ten feet. “Remember: Homage to Abigail Adams” is a mild cerulean of the same dimensions, as is “Blush” in a low intensity cadmium red. Each work is dusted with chalk (although “Blush” is chalk over water-based paint) and appointed with configurations of erasures based on bower landscape wallcoverings. The diagrammatic ornamentation, reflecting embedded landscapes and constrained authorship, float softly between subject and predicate in atmospheric montage. Her soft-focused patterns become increasingly visible as one approaches the wall and at the point they are clearest the immediate vicinity is flooded with reflected color.

Patterns in “Limina” reflect fragile, slender, and sometimes ambiguous links between nature and culture. The artist takes note of unanticipated images within selected texts, also a critical feature in her earlier 2D work and installations. She looks for differing values embedded in speech and provides a kind of test for us to decode. Her elite competencies in photography, print, and installation generate a theater of pleasurable de-compositions and demonstrate how meanings may enter and exit surveillance, deflect interrogation, and evade cultural authority.

In an earlier conversation with Bellavance she disclosed that, “A key conceptual underpinning to my career-long interest in the landscape as a visual and narrative form is my resistance to the dichotomous relationships such as wild/tame, wilderness/cultivated, nature/human, women/men, animal/plant, animate/inanimate, etc., and how these play out in actual, imaginary, psychological, and conventional notions of figure/ground relationships and subjectivity.” 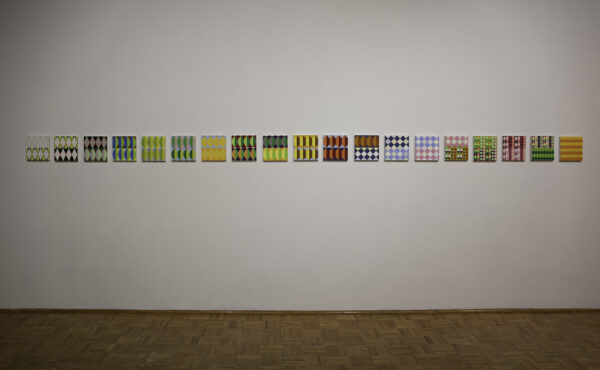 Adjacent to the long wall of drawings hangs a ribbon of smaller geometric color studies that are based on direct observation of nature. Each image features some combination of rhomboids, squares, circles, and triangles in tight sequences and display a much more methodical route to investigating pattern. Each series underscores a conceptually blended method of constructing the visual and illuminates a path into landscape via the particularities of color and her memory.

The artist implies in the aforementioned conversation that the patterns and color she’s most drawn to in landscape are ambient and fleeting. In an effort to apprehend design in nature she re-configures and stabilizes an alternative to traditional and formulaic representations of nature vs. culture. In nineteen small panels of color patterns she raises the question – can design be considered intrinsic to nature if it’s also an exercise in classification and  control? In modernism the answer would be yes, post-modernism no, and in contemporaneity, both. 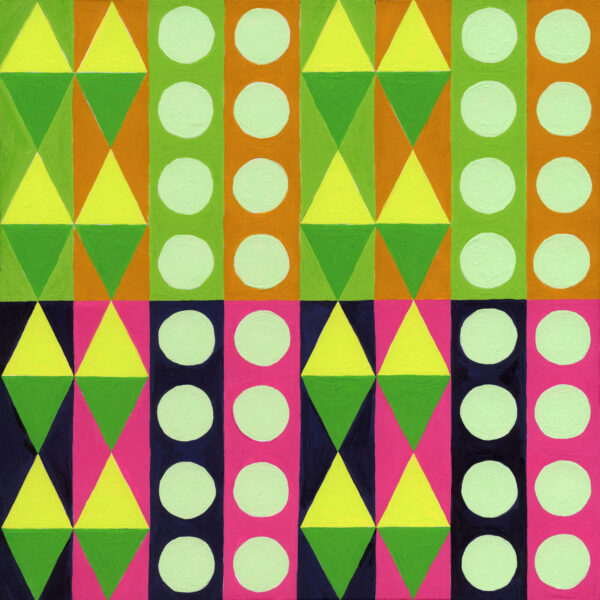 Werner Heisenberg noted that the mere fact of looking alters the observed subject and Bellavance makes every effort to not intrude on what she sees. Consequently, no photographs of nature are taken for her study. Color is only determined from notes made after each monthly woodland trek. Like the drawings, then, the studies are secured from writing – her detailed notes. While the large drawings are texts tuned by atmospheric modification, the paintings are atmosphere fixed by textual conversion. “Naturalness” in each is is properly in flux and deduced through the inspired unruliness of memory. The patterns are selected and recorded in the resultant series of fragmented geometry, formulated to quasi-Pointillist proportions in a pigment/prose continuum. Not exactly the remediation of dichotomous equivalences but an inspired approach to studio production in a period of the artworld’s collective rootlessness.