For decades Susan Snodgrass has been the city’s foremost independent art writer, valued for an acutely perceptive critical method that respects and illuminates both local and global aesthetics. Snodgrass is devoted to alternative models of critical practice and art making, whether exploring new genres of public art or contemporary art in the still less visible capitals of Eastern Europe. She has written for print and online publications, served as a Corresponding Editor of “Art in America” for twenty years, and is coeditor of ARTMargins Online. She is a 2019 recipient of a Creative Capital/Andy Warhol Foundation Arts Writers Grant for her blog, In/Site: Reflections on the Art of Place, which explores art and urbanism, and was a finalist for the 2019 Dorothea and Leo Rabkin Foundation Arts Journalist Award.

Recent curatorial projects and texts have focused on the architecture of native Illinoisan Ken Isaacs, and were included in exhibitions at the School of the Art Institute of Chicago’s Sullivan Galleries and the Walker Art Center. Her 2019 book Inside the Matrix: The Radical Designs of Ken Isaacs is available at Half Letter Press.

Here in the first part of a two-part interview, we discuss her work around Ken Isaacs 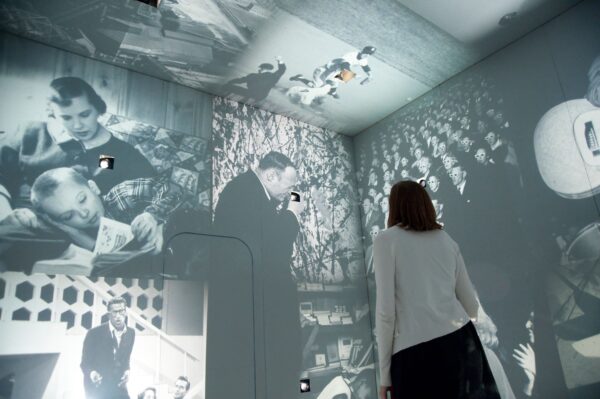 PK: Susan, how did you come to work with Ken Isaacs for the show, “Hippie Modernism: The Struggle for Utopia,” a few years ago at the Walker Art Center in Minneapolis?

SS: My work with Ken Isaacs really began in 2009 with the group exhibition “Learning Modern” on view at what was then the Sullivan Galleries at the School of the Art Institute of Chicago (SAIC). For this, I curated and led the reconstruction of Isaacs’s Knowledge Box, an immersive learning chamber utilizing slide projections originally created as part of a design course he taught at the Illinois Institute of Technology (IIT) from 1961 to 1962.

The theme of this group exhibition explored the continued legacies of the New Bauhaus, and its later iterations the Institute of Design and IIT. I was one of the project curators for the show and discovered Isaacs’s work during my initial research in the IIT Archives. For me, the Knowledge Box was a bit of a revelation, and something I knew I wanted to explore further. Since the 1962 Knowledge Box, including its original slide and audio programs, no longer existed, it had to be totally reconstructed. It was a privilege to meet Ken and work so closely with him to create a new version of the Knowledge Box, which remained true to the original although the dimensions were changed to fit the spatial requirements of the Sullivan Galleries. Responding to the theme of the exhibition, we created a new slide program of black-and-white images from 1950 to 1960 that together marked the rise of global modernity, as well as a new audio-scape, a montage of music and excerpts from political speeches, and radio and television programs from the same decade. As I have often stated, Ken was a generous spirit who brought humor and an openness to others’ ideas to the project, which couldn’t have been realized without the terrific team assembled from both SAIC and IIT.

I was then contacted by Andrew Blauvelt, curator of “Hippie Modernism: The Struggle for Utopia” (2015) at the Walker Art Center in Minneapolis, who was interested in including Isaacs’s work in this touring exhibition that explored the histories of various alternative architecture and design movements. When it was decided to include the 2009 version of the Knowledge Box, I acted as a curatorial advisor to help guide its installation, as well as update the slide program and obtain the necessary image permissions. I also contributed an interview with Isaacs to the exhibition catalog, which I was so honored to do. As it turned out, it would be his last interview, as Ken died shortly thereafter in 2016.

PK: That’s a remarkable, and moving, series of events. How then did the book idea develop?

SS: I have known Brett Bloom and Marc Fischer of the artistic collaborative Temporary Services and their publishing imprint Half Letter Press for a long time. Isaacs’s work has always been a bit of touchstone for Half Letter Press, who over the years have published several titles on visionary architecture, nomadic living, and ecologically sound design. Being enthusiastic admirers of Isaacs’s designs and knowing of my work on the Knowledge Box, Marc and Brett approached me sometime in 2016-2017 about publishing a book on Ken.

I was grateful to then receive a grant from the Graham Foundation that partially funded the production and printing of the book, which was published in 2019. Inside the Matrix: The Radical Designs of Ken Isaacs explores Isaacs’s idea of the “Matrix,” a three-dimensional grid system that was the central concept and building component of all his work, including his Living Structures, Microhouses, and Alpha Chambers. It is a somewhat subjective versus academic treatment of his work drawn from my research and working with him. The book includes rare images drawn from Isaacs’s personal archive, photographs from Getty Images and the John G. Zimmerman Archive, as well as blueprints for building his Superchair (1968) originally published in Popular Science.

I should mention that while I was working on the book with Half Letter Press, I was approached by Sombres torrents, a similar kind of small press based in France, to also write a book on Isaacs. This French translation of my book, with a slightly different design and a few image changes, was published in 2020, and has brought greater visibility to Isaacs’s work in Europe.

PK: What puzzles me about him is that given the breadth and timeliness of his projects that there hasn’t been more attention to him, that he’s remained a somewhat cultish figure. I know architects in academia who have regularly taught seminars that concentrate on his and similar designer’s methodology and theory and since he clearly had so much influence on students in settings that were so au courant it surprises me. I wonder if his cultural criticism was just too strident? Writing that Modernism was just a “cleaning up of history” is an aggressive tone on ornamentation and craft, as well as a diminution of the authority of modernism. And, of course, he was more right than wrong in that observation.

SS: I agree! While Isaacs enthusiastically embraced the new advances in science and technology that modernism ushered in, he was also a vocal critic of mainstream modernism and used the term “culture breaker” to describe his designs that sought to “break” traditional cultural values. And as I mention in Inside the Matrix, as has Victor Margolin in his writings on Ken, his designs circulated through Popular Science his own publications, and mainly within the popular press and and media rather than the more institutional channels of architecture and design. 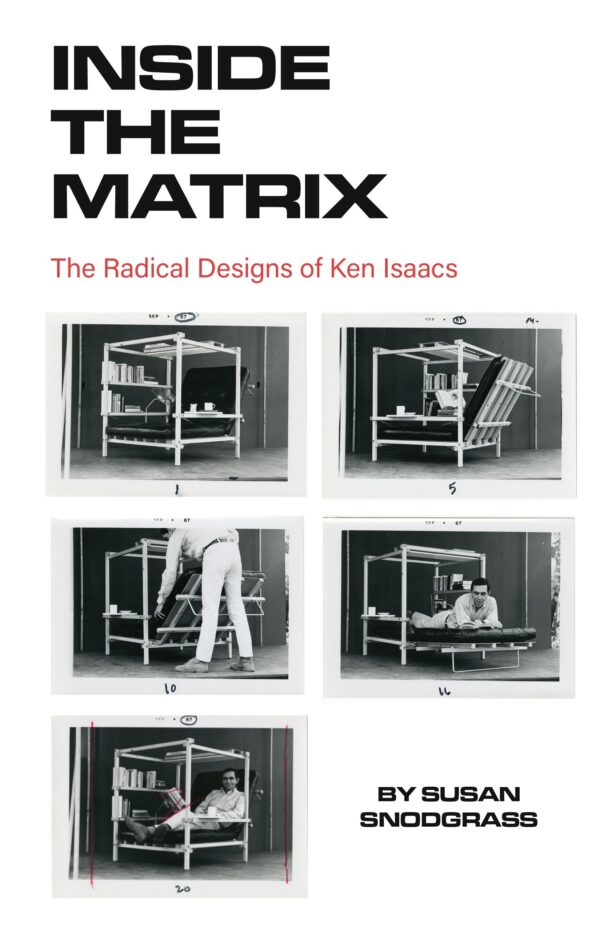 “Inside the Matrix: The Radical Designs of Ken Isaacs”, Susan Snodgrass, Half Letter Press

PK: Can you shed any light on Isaacs’s work, or any critical reception, after his critical phase in the 1960’s,

SS: As I mention in my book, teaching played a central role in Isaacs’s late career and design practice. From 1970 to 2000, he was a faculty member of the School of Architecture at the University of Illinois at Chicago (UIC), where he also served as Director of Graduate Studies. His career at UIC coincided with his last few years in Groveland, Illinois, an expanse of family property where he lived and worked for over a decade developing his Microhouses after receiving a fellowship from the Graham Foundation in 1962. Here he worked alongside family, friends, and colleagues on these small-scale, nomadic shelters, as well as on other designs, some speculative, including transport vehicles and a Matrix raft. Groveland was also an experimental research hub for his students, who worked between UIC and Groveland on various design projects, including the development of the Space Module or Living Cube, a multifunctional structure used as an individual space to study, sleep, and store belongings.

In 1994, Ken shifted away from his matrix concept in his more classically designed home for Seaside in northwest Florida, one of the first planned communities in America based on the principles of New Urbanism. This project isn’t included in Inside the Matrix as it falls outside the central bodies of work that are my main themes, but it is briefly mentioned in Victor Margolin’s essay on Isaacs in his book The Politics of the Artificial.

As far as critical reception, Isaacs continued to receive attention in the mainstream press, including Time, Look, House Beautiful, and an appearance on the Tonight Show, through the late 1960s and early 70s. His book How to Build Your Own Living Structures published in 1974 was quite popular and remains so today with rare copies going for hundreds of dollars on eBay. Margolin’s essay was published in 2000, followed in 2007 by a short feature and video interview in Dwell, but surprisingly very little has been written about Isaacs’s practice in architectural discourses. But thankfully that seems to be changing with Isaacs finally beginning to receive his rightful due.

PK: Has there ever been discussion about a museum exhibition just about Isaacs’s work? Given his genuinely original and democratic views on architecture, domestic environments, and ecology and considering today’s more conceptually flexible and ideologically tinged museum exhibitions, the deficiency of a comprehensive show seems like such of lack of imagination.

SS: Unfortunately, no, or at least not a large-scale treatment of his overall practice. In 2014, Shelly Selim, then a curatorial fellow at the Cranbrook Art Museum, organized a small but impressive show of Isaacs’s work mainly devoted to his time at Cranbrook, both as a graduate student then as a faculty member in the 1950s.

During the run of the “Learning Modern” show, I tried unsuccessfully to interest the Art Institute of Chicago and the Museum of Modern Art in New York about acquiring the Knowledge Box for their architecture and design collections. One of the key issues is that none of the original Living Structures, Microhouses or Alpha Chambers exist, so mounting an exhibition would entail reconstructing his entire body of work. His designs do exist, however, both in his archives (which are now at the Cranbrook Center for Collections and Research) and in his popular book How to Build Your Own Living Structures, published in 1974, that includes easy, step-by-step instructions on how to build his designs. But this is precisely the intention and uniqueness of Isaacs’s practice: his Living Structures and Microhouses were meant to be adapted and constructed by their users, a broad public for whom he made his designs accessible.

I do think there is a growing interest in Isaacs’s work that will hopefully prompt an in-depth exhibition, and I’d like to think that my curatorial work and writing on Ken has helped fuel some of this interest. His Fun House or Beach Matrix (1967) was recently reconstructed for “Open House” in Geneva, Switzerland, a multi-tiered outdoor exhibition exploring mobile architecture. Isaacs is also included as a key figure of environmental design in the exhibition “Visual Natures,” currently on view at the Museum of Art, Architecture and Technology in Lisbon. However, an in-depth survey is long overdue. This is something I might pursue at some future date, but right now I have other writing and editing projects that are my current focus.

Part 2 of the interview includes a discussion of the current state of Eastern European art, including the consequences of the war in Ukraine on regional culture as well as the changing nature of Public Art in the U.S.