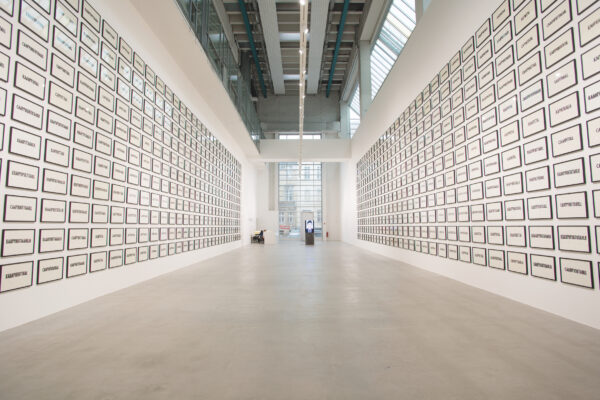 Despite Germany and the United States having similar failings with regard to immigration, race, religion, economic disparity, and creeping nationalism, our country is comparatively young, and our identity is wrapped up with generational risk-taking. Our comparative infancy illuminates as much in the way of social experimentalism as transgressions. Many respected and collected American artists have thus far managed to insert periodic cultural critiques in significant venues, while popular media tags along by mythologizing and exploiting even the most oppressive narratives. Our culture has prominent visual artists who have radical politics, yet rock elaborate projects and fungible spectacles regularly patronized by museums – a bridge too few have tread on in Germany.

Art historian Peter Chametzky describes the landscape and legacy of German artists who are other than white, Christian, or naturalized citizens in “Turks, Jews and Other Germans in Contemporary Art.” The author quickly gets to the heart of his subject. “This book focuses on national, ethnic, religious, and racial identities that provide a challenge to normative conceptions of Germanness as white and Christian with Central European origins, and the expectation that German art is the product and expression of those cultural and historical legacies.” He goes on to say in over 300 compelling, sometimes alarming fact-packed pages, that an underfunded and radical trend of non-traditional German artists are struggling to lead the country to a new cultural cosmopolitanism, “with difference.”

The range of methods that featured artists employ in addressing past and present injustices naturally vary. Ideologically they’re in sync, but differ in that they’re often intensely personal, rather than academically distanced, or parodic like much contemporary political art in America. Many of the artists’ works are contextualized and illuminated by family histories and present experiences.

The book’s title refers to Peter Gay’s collection of essays “Freud, Jews and Other Germans: Masters and Victims in Modernist Culture.” Chametzky explains, “The hybrid “Jewish German,” according to Gay, served as a metaphor for modernity’s dynamically changing culture, a symptom either for social progress, for those who welcomed modernity and Jewish contributions to it, or of decay, for those who did not.” By inserting Turks and others in his title the author contends that German art, like Germany at large, still struggles with otherness, now complicated by Islam and other cultures considered subversive.

Chametzky’s analysis begins with a look at “other” Germans whose artwork explores language. In particular they comment on the grammar of proper German with examples of how the supposedly intransigent and stalwart homeland speech never really lived up to its purity or “naturalness.” He explains how the language has not only undergone normal patterns of evolution but still exists as several regional dialects. This is fair game for migrating artists, as it would be for transnationals anywhere, but particularly in a state deeply indebted to resident workers, that nonetheless makes citizenship so problematic.

Chametzky illustrates, by way of several artists, the complexity of language having precedents in DaDa, German philosophy, and literature. For example, Nasan Tur, a German born artist of Turkish descent merges tropes of conceptual art and capitalist markets with programmed and simulated text. His exhibition of 200 ink variations of the sound-image “capital” represents the plasticity of language and in this case its relationship to technology and finance. Chametzky aptly recounts Marx’s premise about commodity fetishism and alienated labor in describing Tur’s simply designed but labor-intensive, if not obsessive, project. He also adds a note about the arbitrariness of signs – a foundational principle of semiotics and a stamp of abstract art, which the artist manipulates with enthusiasm.

What’s compelling is not only the labor and technology but the enveloping installation that telegraphs the space’s architectural authority. Consequently, the text’s meaning, that Chametzky rightly cites as an example of a language’s culturally determined meaning, is ironically a tightly conceived materiality – a perfectly planned/planed part of a minimalist ground. Not only are the framed objects intended to make the viewer think about language, they physically make “capital” flesh, and reinforce the rigorousness of the white cube, rather than function only as a series of linguistic figures. They’re somewhat reminiscent of Hannah Darboven’s mammoth hand-drawn calendar sequences and text translations that suspended the viewer securely in her systematic vernacular.

Tur’s mathematical probabilities of grammar are framed and installed to cloak the viewer in both poetic, and somatic detail – as if thumbing through a giant folio with no beginning or end point, or a blueprint without entrance or exit.

In chapter two, Chametzky dives into the representation and politicization of diverse bodies. This includes a critical assessment of the classic image of the “Aryan” ideal for a national Volk originally illustrated during the Third Reich. Chametzky comments that “This history still haunts the Contemporary German body politic and has provided artists with material to work with and against”

For context we read about the early 1990s where right wing, anti-foreign sentiment, and neo-Nazi violence terrorized large numbers of German Turks, Vietnamese and Romani. Right wing politics and immigrant obstructions still remain, and the artists who challenge them are not ones promoted in mainstream venues or media outside of Germany. Painter Rolf Zimmermann considers the plights of Romanians, Boznians, and others requesting sanctuary in a state with disparaging citizens. Two of his stark paintings encapsulate a day in the life of beleaguered asylum seekers, rendering them with garish insect heads skulking in interiors that feel more like detention centers as they do sites of cultural deliverance.

Both works call to mind screen shots from a William Kentridge animation, which makes sense given the history of Apartheid and since only a surreal and banal portrait of oppression would resonate in countries with such tragic histories of almost operatic volume. 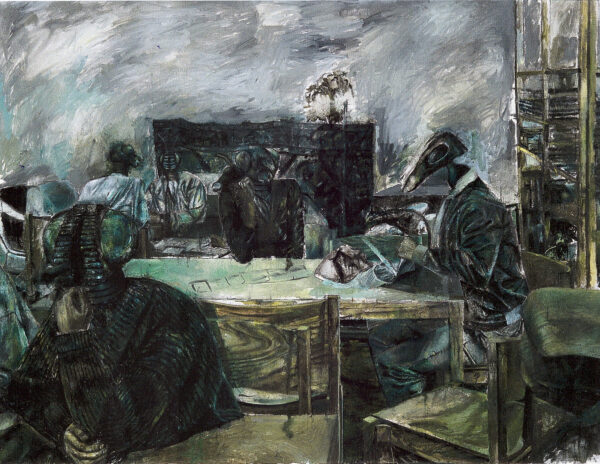 There’s a deep investment, by non-traditional German artists, in conveying a transnational narrative, especially ones that get under the skin of a wide swath of German-born public. Not surprisingly, the subject and the psychology of the work is indebted to former Jewish German artists and writers as they have the longest, most agonizing relationship with the state’s oppressive, racist history. The violence of the 1990’s and more recent acts by neo-Nazi organizations like the Third Path raise the specter of the Holocaust, a reality that percolates just below the surface, but rarely submerged in the personal experiences of many Jewish families.

Today the largest ethnic minority in the country is Turkish, most of which came to Germany as part of the Guest Workers Program that ran from 1955 to 1973. A distinct way their culture presents is through foods – the title of the 3rd chapter. While devoted to specific projects that analyze culinary history, form, menus, and marketing, this section explains much about how Turks, Jews, Vietnamese, and Romani have made genuine inroads into traditional German cooking.

Chametzky de-mythologizes the sausage and potato palette of native Deutsch-landers… “German cuisines, like German languages, have always been regionally defined and in flux.” We discover that the favorite food of most Germans is Spaghetti Bolognese, followed closely by spaghetti marinara, schnitzel, and pizza, (a note that seems more like tourist fare in Chicago or Philadelphia). The Turkish Doner kebob, conceived to adapt to regional German tastes, have taken over as the most popular fast food. Doner stands sell more than McDonalds and these sites became casual meeting places even as critical forums for connecting and familiarizing Germans with Islamic communities.

The status of the stands is significant, causing German nationalists to decry inroads into any aspects of the mainstream, comparing Turkish menu popularity to the British preference for daal, sabzi roti, pakoras and byrani over “bangers and mash” which they see as a surrender to foreign influence.

The chapter also features work by a collaborative group that critiques racist underpinnings of Edeka, one of Germany’s most prominent independent supermarkets, that “often packages food in ways that propagate racist imagery and stereotypes.” The anti-racist “Edewa” project led by Natasha A. Kelly constructed an alternative market with products that tell the story of the colonial roots of the business as it critiques racist and sexist aspects of their advertising.

“Turks, Jews, and Other Germans…” describes how often immigrant artists have been stereotyped or excluded from their contemporaries. One case involves the figurative expressionist painter Marwan Kassab-Bachi, a Damascas born Berlin artist, who was a classmate of George Baselitz and others of the Pandemonium period. Chametzky details his contribution to the scene despite his not being accurately credited, even diminished by critics who spoke of his baroque and Bedouin background. This is despite having studied and worked most of his life in Berlin and regardless of the fact that his work fit squarely within the Pandemonium aesthetic – one designed to counter the repressive cultural order of the previous generation. So not only were other Germans sidelined when their art critiqued the culture at large they also weren’t welcome to participate in the “proper” indigenous artists’ collective critique.

Chametzky goes to great length to detail the criticality of the those considered by the right as outsiders. He asserts that rather than destabilizing culture, the artists actually advance a full portrait of German identity. Of course this candid image of the nation is not the “patriotic” account that organizations like the AfD, (Alternative für Deutschland) traffic in. Photographer’s like Mazier Moradi composes empathetic portraits of individuals that subvert the xenophobic imagination by rendering transnationals unflappably present.

Candida Höfer, a widely recognized Cologne-based artist, who studied with Bernd and Hilla Becher, is included with her early resigned, sometimes stern “Turks in Germany” portraits. These black and white photographs reveal, as does her continued practice in large-scale color architectural interiors, the influence of place upon identity. Like Höfer, the last chapters explore the confluence of the private and public self in the face of radical change in what increasingly constitutes the new German space.

Also featured are complex photo narratives and interviews of immigrants by Mischa Kuball, as well as images of Turkish cafes and slightly abstracted shots of men’s club patrons by Romania born Loredana Nemes. All reflect upon the complexity of immigrant families and their considerable presence in the contemporary landscape, one with little representation in popular media or art forums.

Lastly, the public works of the Turkish team Özlem Günyol and Mustafa Kunt disassemble, re-configure and construct new official markers in public squares that probe symbols of classic nationhood. Their somewhat more ethnographic project “Where am I, As if in a dream…Did we arrive” comprises an enormous undulating concrete park bench inscribed with the work’s title that observes the psychological dis-location of many immigrants worldwide. The contours of the bench duplicate the unimaginably serpentine route a Syrian woman endured in reaching her destination. The poignant title was actually the emigree’s response in a BBC interview about finally arriving in Gothenburg. Günyol and Kunt collaborations embody the “cosmopolitanism with difference” that Chametzky trusts will lead to an authentic liberal society. While most Germans find right wing extremism toxic, “Turks, Jews, and Other Germans….” confirms that much has to change in the nation’s interior for the artists, and those they represent, to be recognized for things other than their tireless perimeter mobility. 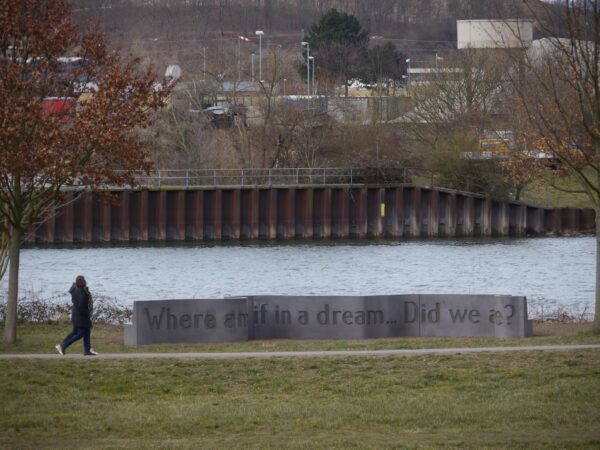