Bad at Art Forum #6: The Geology of Zen Media

When I was first exposed to contemporary art in the early aughts, it was easy for me to imagine that the work of Nam June Paik was a comment on consumerism and obsolescence, thinking (without checking dates) that all of his works employed obsolete technologies: cathode-ray TVs, analogue recording equipment, blank film projections, empty television housing with a lit candle inside. What my teenaged brain did not compute was that many of these works and technologies were cutting edge in the time they were created. Only in hindsight do their technological aesthetic appear retrograde. 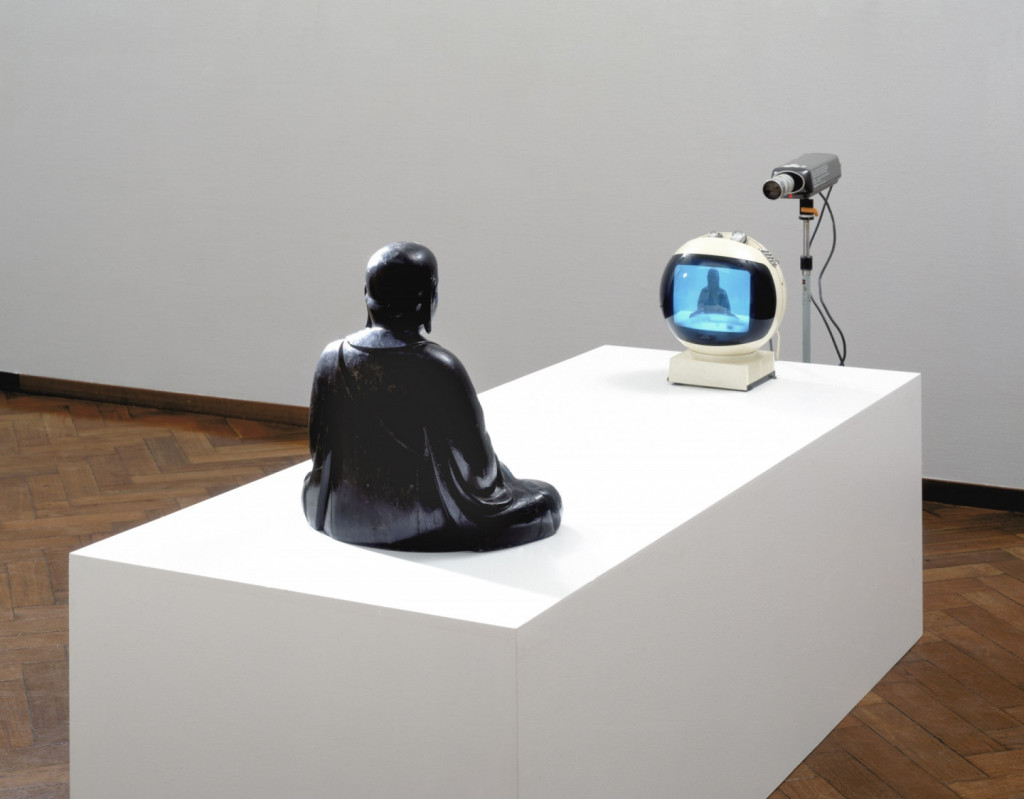 Since Paik was defining video art in its advent, it has become more commonplace for artists to intentionally use so-called “e-waste” in their works. Leonardo Ulian, for example, born in Italy and working in London, uses e-waste to create mandalas. Like Paik, Ulian seeks to explore the relationship between technology and the immaterial – perhaps even transcendental. By isolating electronic components for colour and sparse symmetry, and then delicately connecting them via copper wire (the penultimate energy conductor), Ulian both questions and confirms technology as a spiritual and somewhat ineffable component of twenty-first century life. 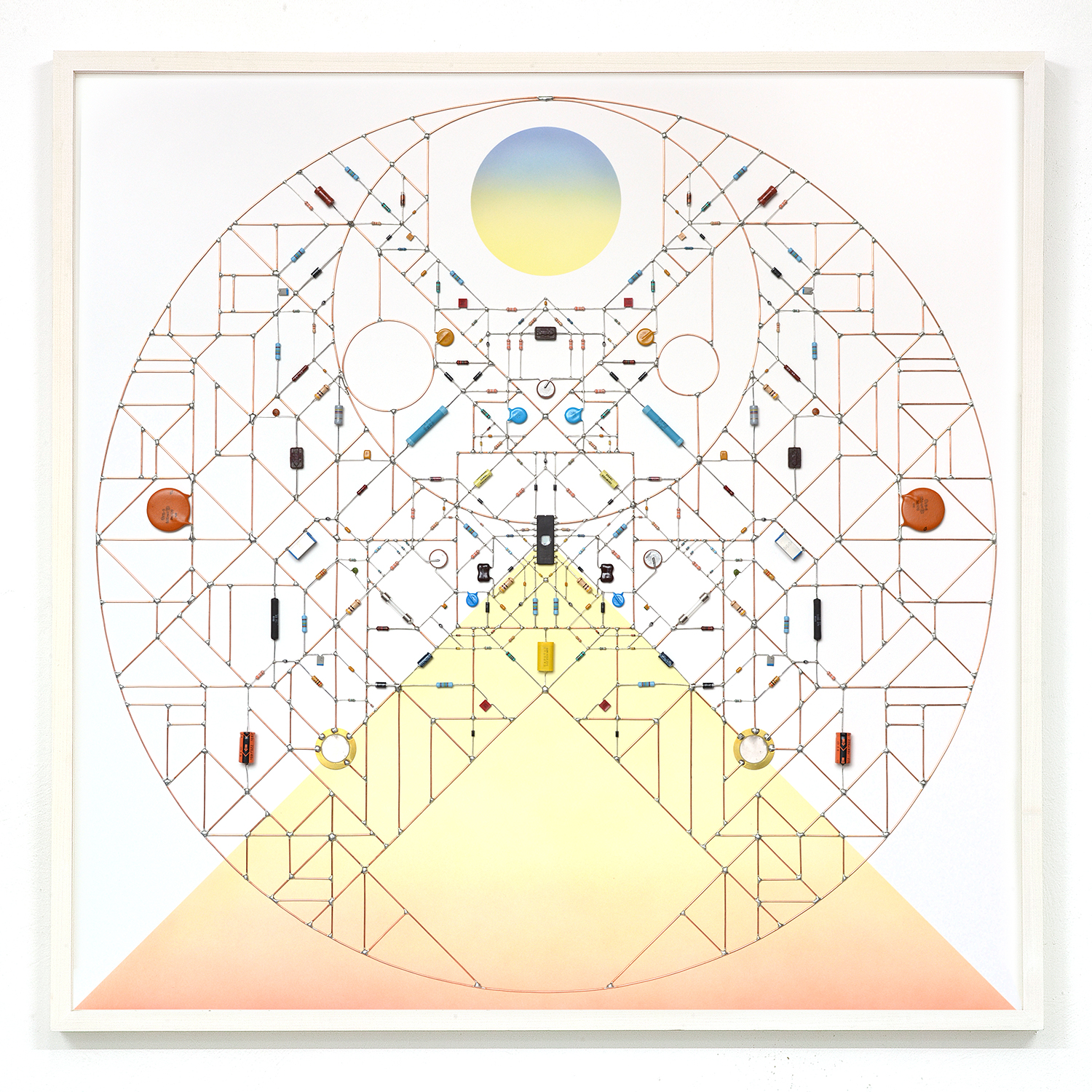 Scholar Jussi Parikka in his Geology of Media argues that “to adequately understand contemporary media culture, we must set out from material realities that precede media themselves—Earth’s history, geological formations, minerals, and energy.” Copper is a great place to start. So much more than a trendy interior design accent, copper is a soft, malleable, ductile material that is infinitely recyclable, and an excellent conductor of heat and electricity. It’s been used in electrical wiring since the invention of the telegraph in the 1820s. In the twenty-first century, it has become so valuable that even low-quality copper deposits are financially viable to mine, deposits that produce only a single ton of copper per 100 tons of waste ore. This is why recycling wire – everything from computer cables and power cords to smartphones and Christmas lights – has become a viable form of “resource extraction.” Since Operation National Sword in 2017 – a ban on solid waste imports* from countries external to China, much of this is now done locally, or not at all.

After all, the value of precious metals in our electronics is where we got the term “e-waste” in the first place. As early as 2007, Steve McQueen produced a gut-wrenching 35mm film titled “Gravesend” centred on the manual extraction of coltan in the Congo for its use in mobiles and laptops. The film shows miners, many of them children, working horrendous hours and conditions for abysmally-low wages. But unlike a typical documentary, this short film is rife with abstraction, lengthy emotive shots, sinister cinematography, the allusion to violence via metaphor, and a stark contrast between futuristic processing plants and the meaty, all-too-human means by which it is extracted. The DRC has a long history of being exploited for its resources by wealthier nations. Having 80% of the world’s coltan reserves is as much a blessing as oil has been to the Niger Delta.

Parikka notes that “the circuit, not the past, is where media archeology starts if we want to develop a more concrete design-oriented version of how we can think about recycling and remediating as art methods.” For an artist like Wally Dion of the Yellow Quill First Nation (Salteaux), the circuit is a tool for remediating both the past and the future. In perhaps his most affecting series, Dion creates a series of “Starblankets” from circuit boards: a concentric geometric pattern inspired by the Morning Star – a link between the spirits and the earth, the living and the dead – according to Lakota legend. Dion hails from Treaty Six territory (also known as Saskatoon, Canada), where Starblanket quilts commonly adorn walls and beds, both on and off of the Reservation. Historically, they represent honour and generosity, and serve as a replacement for the traditional buffalo hides that once adorned the backs of warriors and hunters safely returning from successful battles, hunts or vision quests. With the near-extinction of the buffalo that dominated North America prior to colonization, it is no small wonder textiles came to replace them. Each diamond on the Starblanket represents an individual person, the sum of which surrounds the receiver of the blanket in support, protection, love, and care. When replaced with circuitry, this connection is further emphasized, in the digital and the material realm. In the survivalist tradition of adaptability, Dion accepts and furthers the work of his ancestors, demanding a place in the present and future in the face of attempted erasure. 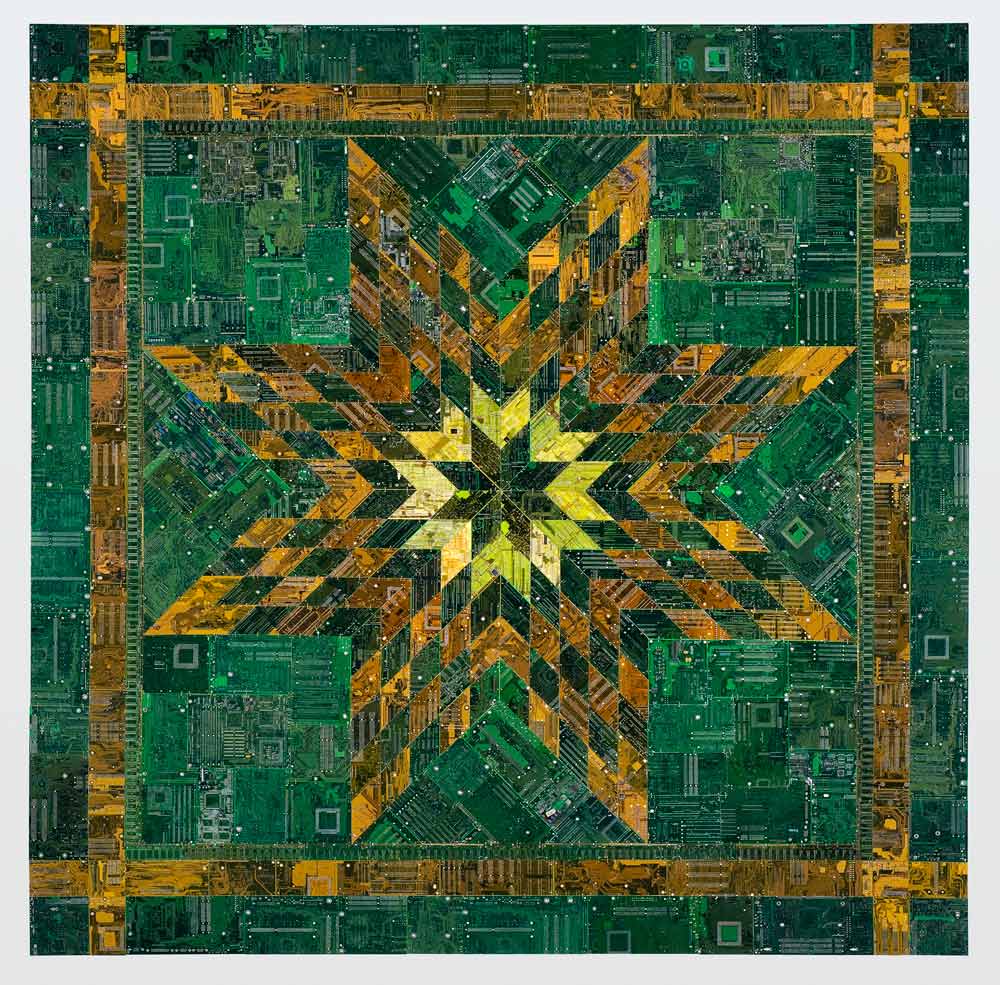 The science fiction novel Hail Mary by Andy Weir describes an alien race whose manipulation of the speculative element “xenonite” allows them to create infinite technological advances, in spite of their relatively antiquated scientific knowledge. Whether it’s trace amounts of rare earths like indium suspended in glass to make our screens touch sensitive, or the ten ounces of gold contained in a ton of cell phones (far more gold than you’ll ever find in high-grade ore), material realities can create, further, and disrupt our technological realities.

Silicon Valley, named after the element that launched it, is a textbook example of this. The element silicon (sand) is synthesized into a pure monocrystal, creating a thin, wafer-like base that can support thousands of transistors. Needless to say, without the advent of this technology, the internet and all subsequent digital art would not exist – including the practice of Berlin-based Dutch artist Constant Dullaart – whose work exists on, off, and through the web. Dullaart examines the broad cultural and social effects of communication and the corporations that influence our social realities, like Google and Facebook. In his PVA series, SIM cards from the fake-followers industry are used to create abstracted imagery, like a coat of arms or an army formation, in reference to the manipulation of politics and information. These (gold and silicon) SIM cards are used by companies offering PVAs (Phone Verified Accounts) as a service to create multiple user accounts for fake profiles, each one a new “identity” awaiting formation. By creating his “army” of PVAs, Dullaart brings attention to the audience as commodity, and to the way online wars are fought below the surface of what may appear to be the triviality or vanity of social networking. 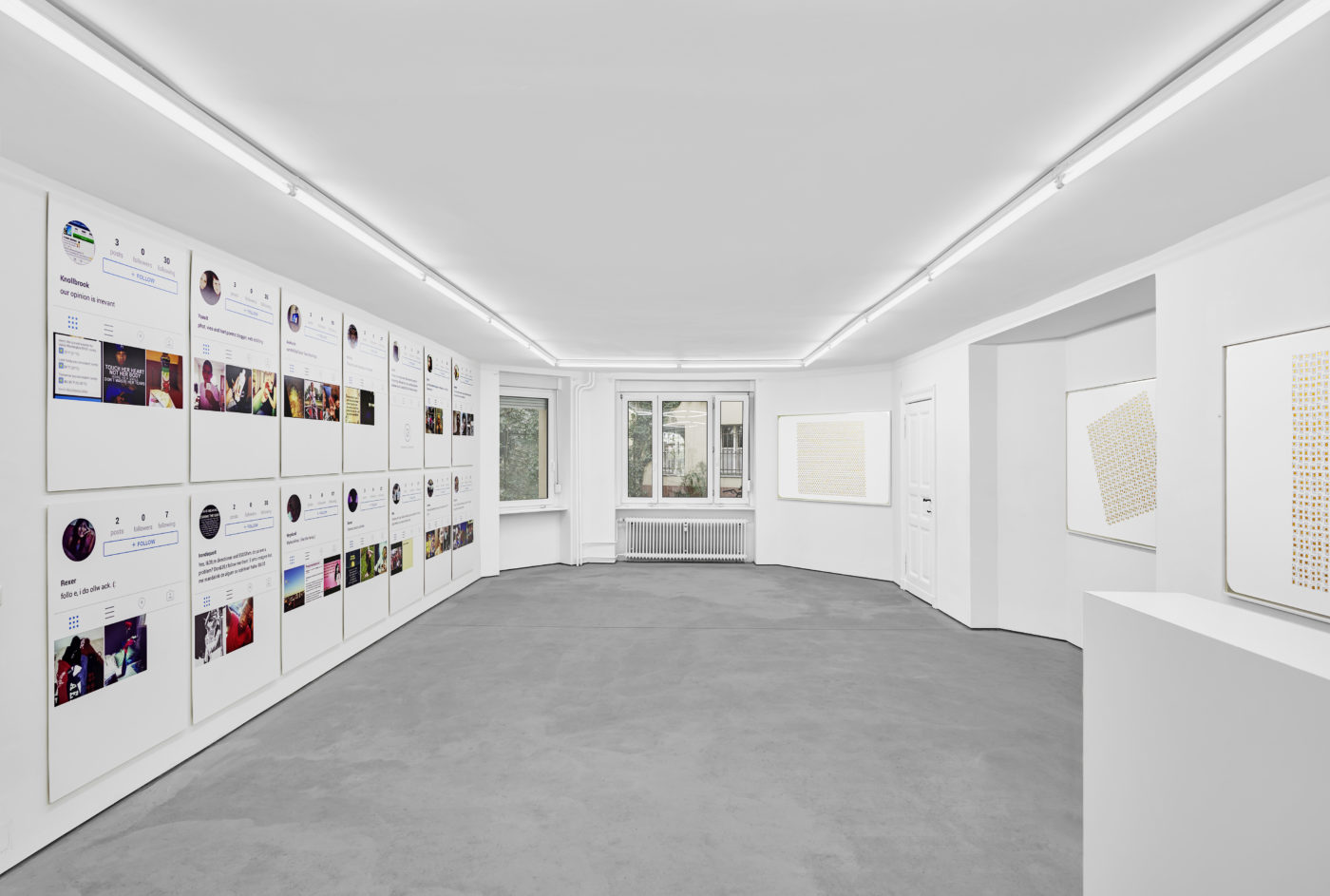 The earth’s geological history forms our present and future media, and through the geology of media we are currently forming our past. All of the sulfuric ore left from copper, every antenna and power line we’ve erected, all of the mountains of media forming new pockets and layers of earth – temporarily sorted – will one day churn like butter in the earth, transitioning from kipple to mutant materials to grey goo**.

Swiss artist Julian Charrière speeds up this process in his Metamorphism series, in which he creates his own strata by melting e-waste into lava to create future fossils. Displayed in vitrines like specimens, these igneous rocks contain main boards, hard drives, CPUs, and RAMs from computers and smartphones, which at such high temperatures melt and leak out like foaming acids in striking greens and ochres. They are what Charrière calls “amalgams of cultural memories incorporated into a geological matrix,” which do well to muddle our place in geologic time. Rather than creating a sense of cosmological horror over the futility of all material gestures in the grand and grinding scheme of time, these works bring me a sense of peace. So-called civilization has gnashed flesh and bone for millennia to unearth, circulate, consume, burrow, hide, jettison and retrieve matter – to synthesize a gram of this from a ton of that, until every element has been wrested from its context. Until not a single thing is cushioned by inactivity, instead forced to react and meld and ionize and combust until even our atoms are exhausted. It is peaceful, therefore, to imagine a place of rest for these stressed elements and compounds. Teflon, a fluorochemical,*** makes its way to the Arctic without guidance – a sort of material migration based on its chemical structure. Where will rare earth metals rest, when we’re finally forced to leave them be? 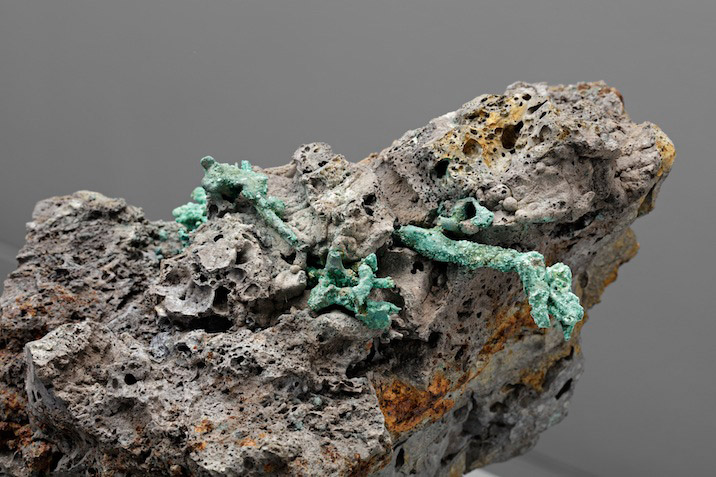 *What was arriving prior to the ban was countless shipping containers of the world’s waste, typically soiled and unsorted, much of which had to be landfilled in China. The outrage that led to Operation National Sword was inspired by a documentary film that became famous in China, depicting a young family recycling plastic in their living and sleeping space with no PPE whatsoever.

** Kipple: a sinister type of trash that builds up without human intervention, always growing in number and driving out other “non-kipple”, until everything has been “kipplized” (i.e. made meaningless). (Philip K. Dick) Mutant Materials: materials that are chemically mixed and become conglomerates, like blended plastics, potmetal, etc. (Paola Antonelli) Grey Goo: a term that some futurologists use to describe the nightmare of nanoscale robots mashing up everything into a colorless morass (K. Eric Drexler)

*** Fluorochemicals are novel, meaning that they did not exist prior to human intervention. This also means that they cannot easily be broken down in the environment.