What You Should Have Noticed in June

What You Should Have Noticed in June, 2014

Welcome back to this month’s edition of What You Should Have Noticed, wherein I try to sum up this month’s happenings from around the art world with a little extra special attention paid towards events here in Chicago. June has been a relatively quiet month, more pretty and foggy and full of football and mass executions than big art news, but what action we’ve had is certainly noteworthy. So come aboard this ship of blog highlights and retweets and lets blast off together.

Permit me a little editorializing: Seward Johnson’s Forever Marilyn was a piece of shit sculpture that should never have happened in Chicago. Absolute trash. Bad sculpture. Bad bad bad. However, even and especially in times of great emotion, as when dealing with evil as great as Forever Marilyn, we must keep in mind that social media is, ultimately, probably, a search for truth, and that even the surge of joy we felt imagining Johnson’s sculpture literally rotting somewhere in art hell (a Chinese dump in Guigang) shouldn’t distract us from this higher calling or lead us to make rumor out of fantasy.

The pictured sculpture, which made its enthusiastic rounds on Facebook this month – drawing more attention than even the America student trapped in a German vagina sculpture – is a knock-off, a Chinese fake, some sad weird copy of the original, which is still festering on view in Palm Springs, California. Too bad, but too true too. 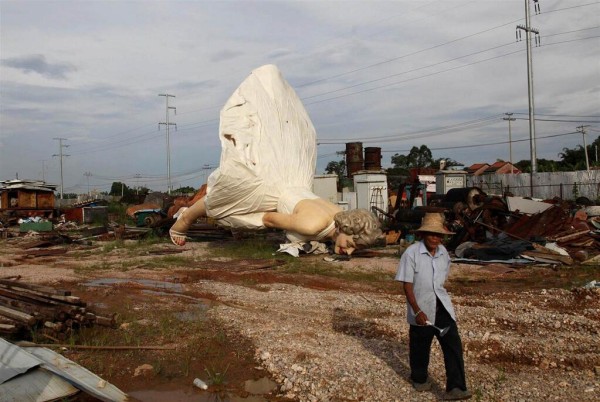 On Monday, June 23rd, the Chicago Transit Authority unveiled the results of the Red Line South call for artists, which began last year. The winners include: Indira Johnson, who will paint Overlapping Connections, a set of Chinese characters at Cermak/Chinatown; Paula Henderson, whose window mural Game Day is a kind of psychedelic cross-town baseball game at Sox/35th; Andrew Hall’s Portraits in Time: From Bronzeville to Back of the Yards at 47th street, a mural of portraits and architectural collage; a text and image window-piece by Cecil McDonald Jr., titled Presenting the Pictures You Wanted to See at Garfield; a garden-friendly mural at 63rd Street, Growing Englewood…, by Emmaneul Pratt & Olalekan Jeyifous; a watery mural titled Sanctuary at 69th Street by Doug Fogelson (hey, I know him!); McArthur Binion’s Seventyninth:Street:Shuffle, a Jasper Johnsy work at 79th Street; and a painting grid at 87th Street by Thomas Lucas, titled Time Traveler, Part 1 and Part 2.

Want more? The next round of public art on the CTA will feature Bad at Sports friends Edra Soto and Dan Sullivan, who will join Patrick McGee and Benjamin Ball/Gaston Nogues in placing new artworks at Blue Line stops. 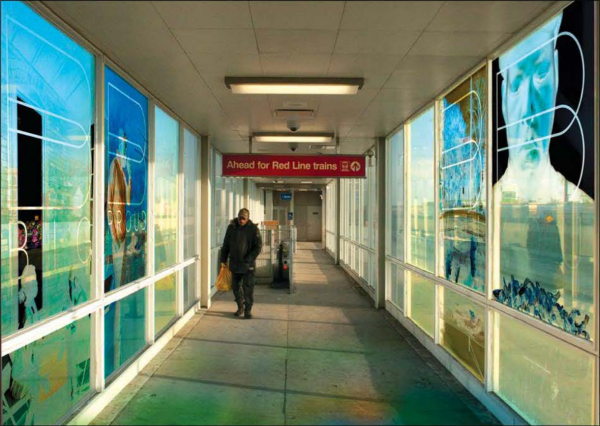 Despite some weak minute pressure from San Francisco and a challenge from Friends of the Park, it looks like the $1 billion, 17-acre George Lucas Museum of Narrative Art will go ahead as planned and join the city’s museum campus sometime in 2018. The site will also soon include the Barack Obama Presidential Library and Museum. Museums and libraries were all the rage this month: the Atlantic reported on statistician Justin Grimes’ discovery that the nation’s 17,000 public libraries and 35,000 museums outnumber both McDonalds and Starbucks locations combined, though none of those feature backlit Star Wars storyboards or interactive Norman Rockwell paintings. 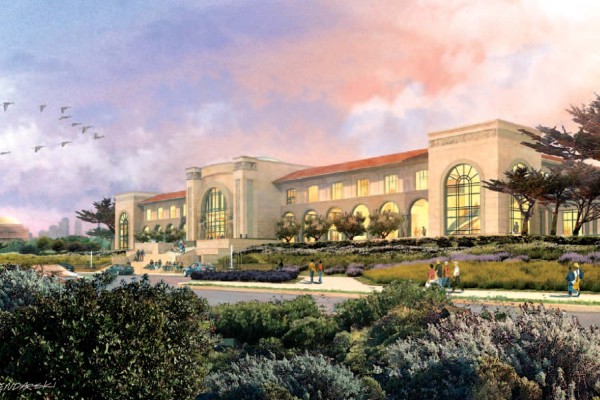 This month the Whitney Museum opened its retrospective of the virile titan of art Jeff Koons, supported by a popular butt-based social media campaign which, if you haven’t seen it, well, now you have. The critical response has been complex, with most writers seeming to like the show while simultaneously mourning the cultural environment that could produce an artist like Koons. Andrew Russeth reluctantly celebrated the retrospective in Gallerist, Jason Farago questioned the dire consequences of Koons’ relevancy for the Guardian, Jerry Saltz obviously cited his Facebook feed when describing Koons in Vulture as the opposite of an artist’s artist, and Carol Vogel at the New York Times gave the Whitney Museum a nod for going out with a brilliant, problematic bang. Spectacular! 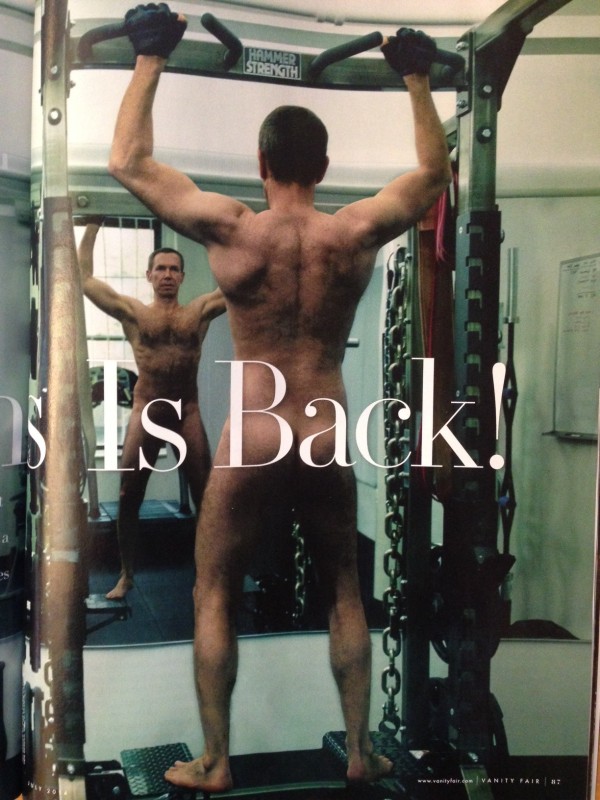 Abstract Painting, Still Crazy After All These Years

Today’s art world still can’t make up its mind about abstract painting. Is it complete market-driven bullshit, ready to flip and turn from season to season, with a produced popularity existing at a level above and apart from cultural relevancy, or is it a paradoxically enduring form of radicalism? Does the tossed-off, rapidly consumed, quick and sorta-challenging semi-abstraction even need justification, or is it all about making a democratic form of DIY abstraction?

Because these issue may bring on a creative crisis for some of our readers, and since this monthly feature is all about saving you some time, I’ve gone ahead and done the thinking for you. Here’s the takeaway: revolutionary fuel burns fast, so don’t let changing political or aesthetic history be your reason for getting into the studio. Whether we like it or not, our culture has carved out a cozy complicit place for aesthetic rebellion in painting, and I promise you that the familiar, collectable kind of shock brought on by a tastefully sloppy painting will never, never, ever wear off. Does this make today’s abstract painting’s “revolutionary” or “anti” critical position a complete sham, closer to avant-garde marketing language than political commitment? Absolutely yes, though the paintings can still be great. Let this be a reminder that the function of art – especially painting for Christ’s sake – is not to bring on a revolution of taste or politics, but rather to create something interesting for fellow human beings to think about, appreciate, and maybe enjoy in one way or another.

So chill out, dear abstract painters! and cheer up too – keep giving us something to look at. Hey, Molly Zuckerma-Hartung won a Tiffany Award this month, and just look at how much fun Lucian Smith is having! See? 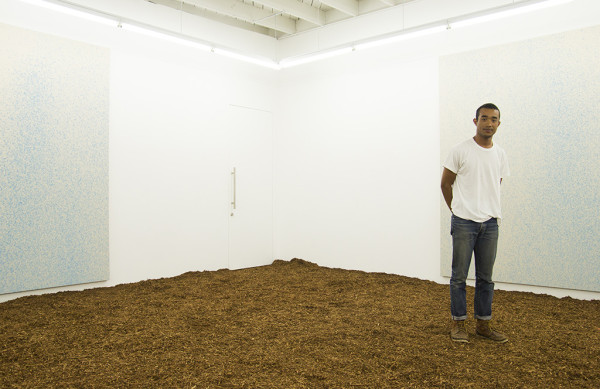 And anyway, that’s really about it for this month. As always, I’ve probably left out a good half of what’s interesting (I refuse to link to that our-brains-are-wired-for-art story), but read this blog entry again and I’m sure you’ll agree that I picked some winners. Have a swell summer, wear that sun block, and check in next month for What You Should Have Noticed in July.