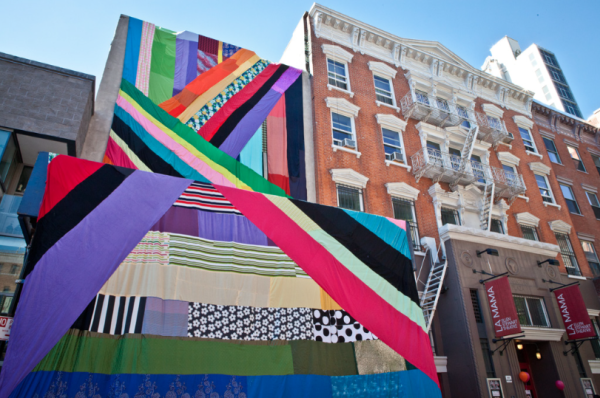 Here is info on some of the cool stuff AB is about these days:

Amanda Browder was commissioned by the Department of Art and Art History and The Alys Stephens Center at University of Alabama at Birmingham to create a large scale fabric installation on the two buildings. Lauren Garber Lake is the director of the Art and Art History Dept who helped bring Amanda.

She had numerous public sewing days and a ton of fabric was donated by the people of Birmingham to sew the over 10,000 square feet of fabric in the project.

Sewing Days – many people from the community and specifically the Bib & Tucker Sewing Co-op that is run by Lillis Taylor who is interviewed today on BAS.

It was up on Aug 29th on the Abroms Engel Institute for the Visual Art building and The Alys Stephens Center. These buildings were across the street from each other.

Amanda has made a print for the project . It is made with the help of Doug Barrett, Associate prof of Graphic Design from UAB who is also interviewed.

Show three building pieces, Rapunzel, Good Morning! and Future Phenomena. Plus an interior piece PRISM/LIVIN/ROOM that will be in the gallery til Jan.

Last week they showed Rapunzel in downtown Missoula on the Mercantile building during First Friday.

This will be an outdoor installation with fabric. The piece is a more energtic and vivacious piece compared to previous pieces. It works with the triangle forms and is also made from the donations at Pelham. This piece will be up Nov 14th.

More about Triumvirate!
November 14, 2014 – January 3, 2015
Triumvirate! is a multi-colored site-specific fabric installation that will hang on the facade of the Pelham Art Center, in Pelham NY. Using donated fabrics from Pelham and the surrounding areas, Triumvirate! will be a visual statement that buildings are not separate from the democratic life and spirit of the community.

The piece, referencing the three dimensional rectangular building, will be constructed from fabric donated by the residents of Pelham and assembled in public sewing day workshops. The immutable scale of the building is dramatized by the scale and independence of the triangles as well as the dimensional ambiguity of the fabric. The design creates a “shock of the new” with both color and form. As a collective we will rejoice in how something as small as a piece of discarded fabric can be rebuilt into an energetic architectural installation.