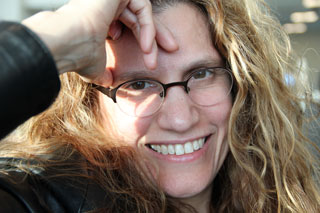 This week: Live from Miami, well it was broadcast live at the time, whatever, anyways, Sharon Louden!!

Sharon M. LoudenÂ graduated with a BFA from theÂ School of the Art Institute of ChicagoÂ and an MFA fromÂ Yale University, School of Art. Her work has been exhibited in numerous venues including the Aldrich Contemporary Art Museum, the Drawing Center, Carnegie Mellon University, Birmingham Museum of Art, Weatherspoon Art Museum and the Kemper Museum of Contemporary Art. Louden’s work is held in major public and private collections including the Neuberger Museum of Art, Whitney Museum of American Art, National Gallery of Art, Arkansas Arts Center, Yale University Art Gallery, Weatherspoon Art Museum, and the Museum of Fine Arts, Houston, among others.

Sharon Louden’s work has also been written about in theÂ New York Times,Â Art in America,Â Washington Post,Â Sculpture MagazineÂ and theÂ Philadelphia Inquirer, as well as other publications. She has received a grant from theÂ Elizabeth Foundation for the ArtsÂ and has participated in residencies atÂ Tamarind Institute,Â Urban GlassÂ and Art Omi.

Louden’s animations continue to be screened and featured in many film festivals and museums all over the world. HerÂ animation,Â Carrier, premiered in the East Wing Auditorium of the National Gallery of Art in Washington, DC in March, 2011 inÂ a historical programÂ of abstract animation since 1927.Â Sharon also premiered a new animation titled,Â Community,Â at theÂ National Gallery of ArtÂ in the program, “Cine Concert: Abstract Film and Animation Since 1970” on September 8, 2013.

Louden was commissioned by theÂ Weisman Art MuseumÂ to make a site-specific work in dialogue with Frank Gehry’s new additions to the museum. EntitledÂ Merge, thisÂ solo exhibitionÂ consisted of over 350,000 units of aluminum extending over a 3,000 square foot space and was on view from October 2011 through May 2012.Â This pieceÂ was then reconfigured and permanently installed in Oak Hall at the University of Connecticut in Storrs, CT and completed in January, 2013.

Also in 2013, Louden received aÂ New York Foundation for the Arts Artist FellowshipÂ in the category of Architecture/Environmental Structures/Design.

RecentÂ exhibitions include aÂ solo exhibition ofÂ new work includingÂ Community (the animation that premiered at the National Gallery of Art), as well a site-specific installation, painting, drawing and sculpture atÂ Morgan Lehman GalleryÂ in New York in October through November, 2013. Currently on view is Â a solo exhibition of Louden’s paintingsÂ and drawings atÂ Beta Pictoris/Maus Contemporary ArtÂ in Birmingham, Alabama, which will run through February 16, 2014.

Sharon LoudenÂ has taught for more than 20 years since graduating from Yale in 1991. Her teaching experience includes studio and professional practice classes to students of all levels in colleges and universities throughout the United States. Colleges and universities at which she has lectured and taught include: Kansas City Art Institute, College of Saint Rose, Massachusetts College of Art, Vanderbilt University and Maryland Institute College of Art. Sharon currently teaches at theÂ NewÂ YorkÂ Academy of ArtÂ in New York City. Last summer, Sharon taught experimental drawing and collageÂ in theÂ School of Art at Chautuaqua InstitutionÂ in Chautauqua, New York.

In addition to teaching at theÂ New York Academy of Art, Sharon also conducts a popularÂ Lecture SeriesÂ where she interviews luminaries and exceptional individuals in the art world and from afar.

Louden is also the editor ofÂ Living and Sustaining a Creative Life: Essays by 40 Working ArtistsÂ published byÂ Intellect BooksÂ and distributed by theÂ University of Chicago Press.Â The book is already on its fourth printing since the first runÂ sold out before its official release on October 15th, and has been #1 onÂ Amazon.com’s Bestseller List of Business Art References. It was also onÂ Hyperallergic’s List of Top Art Books of 2013.Â Recent press includes an interview in Hyperallergic blogazine,Â “How do Artists Live?”.Â

AÂ book tourÂ started onÂ November 2, 2013 which includes SharonÂ Louden and other contributors visitingÂ cities across the United States and in Europe through 2015.Â  Highlights include an event in theÂ Salon atÂ the Art Basel Miami Beach Art FairÂ this past December, 2013 as well as aÂ discussion and book event at the 92nd St Y in New YorkÂ and a panel discussion at the Hirshhorn Museum and Sculpture Garden in Washington, DC in January, 2014. For more information on the book tour, please clickhere.

Sharon is a full-time practicing, professional artist who lives and works in Brooklyn, NY.