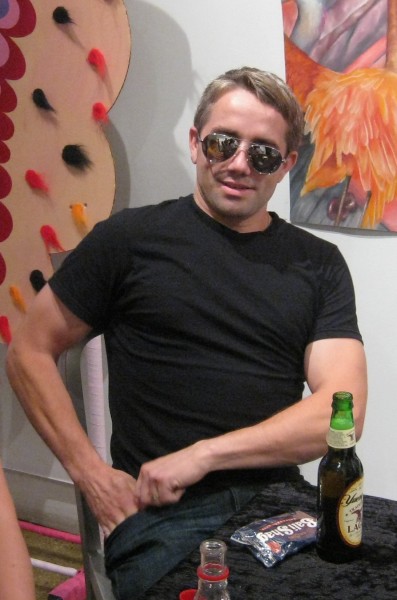 This week: Live on stage without a net from Art Expo Chicago 2013 (aka EXPO CHICAGO, The International Exposition of Contemporary and Modern Art) Duncan and Richard talk to Galleries Charlie James (Charlie James Gallery, Los Angeles) and artist William Powhida!

William Powhida (b. 1976, New York) is an artist and critic living and working in Williamsburg, Brooklyn. For several years Powhida worked as an art critic for the Brooklyn Rail while developing his own artistic practice. Powhidaâ€™s work, reflecting his critical background, displays a concentrated fascination with the politics of access and the powers that control the assignment of value in the artworld. All roles are fair game, from nouveau-hot artists and the market-setting collectors that buy them, to the branded dealers that sell the work and the critics paid to provide intellectual justification for the pricepoints.

To soften what might appear a direct editorial voice, Powhida projects his commentary through the lens of an alter-ego, one with whom he shares a name (William Powhida). This alter-ego closely resembles any number of freshly minted artworld â€˜geniuses,â€™ though Powhidaâ€™s character happens to exhibit all of the worst traits imaginable in any coddled enfant-terrible art star. The fictional Powhida is petulant, narcissistic, and debauched. He has enormous feelings of entitlement, and a perspective so firmly rooted in solipsism that it seems an impossible exaggeration. This art star on the verge of self-immolation documents his misery and rage against the manifold injustices of the art world through a series of To Do Lists, Enemies Lists, and monomaniacal screeds that take on the look of disturbed 3am rants. However, not all of this work exists in the first person. In addition to the alter-egoâ€™s jeremiads, Powhida adds the sycophantic voice of the press Â¬ a vital part of the star-making process. Ostensibly a frequent subject of Man About Town profiles in fashion magazines and newspapers, the alter-egoâ€™s more offensive conduct and outsized claims are documented in this way.

Which brings us to the startling visual power of Powhidaâ€™s work. All of the content above, from the characterâ€™s first-person attacks to press profiles by the New York Post, the LA Weekly, and 944 Magazine (examples) are all rendered in beautiful trompe lâ€™oeil compositions that use various combinations of graphite, gouache, and colored pencil on either panel or paper. It is in fact the visual presentation of Powhidaâ€™s arguments, coupled with their humor, that makes Powhidaâ€™s sometimes scathing commentaries so much fun to digest.

William Powhida earned his BFA from Syracuse University, and took his MFA from Hunter College. He is represented by Platform Gallery in Seattle, and Charlie James Gallery in Los Angeles.