The Centre For Innovative and Radical Fishmongery 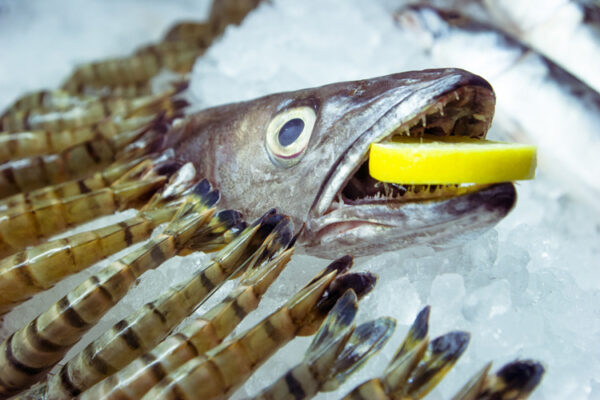 To respond to the art world with a fish may be a surrealist gesture. But to respond with an entire fish counter, complete with fishmongers in white boots, ice and creative displays of the seafood itself, is surely pushing the 20th century genre to breaking point.

Such is the effect of the so-called Centre for Innovative and Radical Fishmongery, spotted in public at Sluice Art Fair, London, late October. Amidst the plentiful art for sale, the wares at CIRF included a scrambling pile of langoustine and a sinister-looking hake chewing on a lemon.

The artist behind the project is Sam Curtis who came to fishmongery by chance in 2006. A part time MFA at prestigious art school Goldsmiths necessitated finding work. By strange twist of fate, he found an opening on the fish counter at luxury department store Harrods.

â€œI decided to kill two birds with one stone,â€ he tells me when we catch up via phone. â€œI was under a lot of pressure to make work and earn at the same time, so I turned the day job into a studio, into a springboard, a platform for creating new projects.â€

Curtis took his fishmongery skills back to successful crits at Goldsmiths. â€œI called it working in stealth mode, an undercover residency where my employer and my colleagues werenâ€™t aware of the things that I was doing, what I was taking from the job, until the end,â€ he says.

After leaving this post, the artist blew his cover. â€œIt was hard for them to grasp, in a way,â€ he says of his erstwhile colleagues, and equally hard to get their heads round was the film Curtis went on to make about them, â€œabout their creativity and how they potentially see themselves as artistsâ€.

â€œThereâ€™s a performative aspect to it,â€ says the artist of his former trade, and, â€œThere is a lot of theatre there,â€ he says of his former workplace. But he now sees his installation at Sluice as a conceptual piece, and one he hopes to be able to tour.

â€œFish are different all round the country,â€ he explains, adding that he hopes to collaborate with more fishmongers and artists alike. Pre CIRF, in 2011 he completed a residency in a fish shop in Penzance, Cornwall. There are clearly openings for artists working with fish.

But his new project is nothing if not inclusive. For the London art fair, Curtis invited half a dozen visiting artists to make their own displays. He can now add their ideas to the ever growing repertoire: â€œThey created displays that I would never have done,â€ he admits.

And with an art fair audience already primed for excitement, Curtis can claim reactions of genuine surprise towards his intervention at Sluice. With plenty of conversation about fish, there was also an interest in day jobs in general and ways in which they can be creative.

Curtis says that artists and creative types are highly prone to disappointment in the realities of working life: â€œYour expectations arenâ€™t really fulfilled quite often, because you might have more glamorous ideals about what being an artist is.”

By contrast, the fish-loving artist also says: â€œIâ€™m interested in treating life as an artwork. Hence the turning of day job into a residency. I think if you can inject creativity into the more banal parts of your life, youâ€™re more likely to become fulfilled.â€

â€œIâ€™ve always played on the fact you can insert your practice into your day job, no matter how far detached away from art that job is.â€ But even Curtis has his moments of doubt, having recently taken on a new full time job, he admits to being â€œslightly scaredâ€ about losing time for his art.

â€œAs to what the best day jobs are, I donâ€™t know,â€ he says, having tried working in a gallery and not liking the experience. â€œI prefer being quite far away from the art world.â€

The trick is surely to become Innovative and Radical in everything you do, be that showing fish alongside video or giving away seafood at an art fair. â€œIn terms of fishmongery and the radicalization of fishmongery I donâ€™t think weâ€™ve reached that point yet,â€ says Curtis. CIRF is clearly going after the big, ocean-going game.

Sam Curtis and the Centre for Innovative and Radical Fishmongery are represented by Division of Labour and were seen at Sluice Art Fair.