Open Engagement 2013 no. 02 : A Utopia of Dispute Might Be Better / Regarding Ethics & Failure 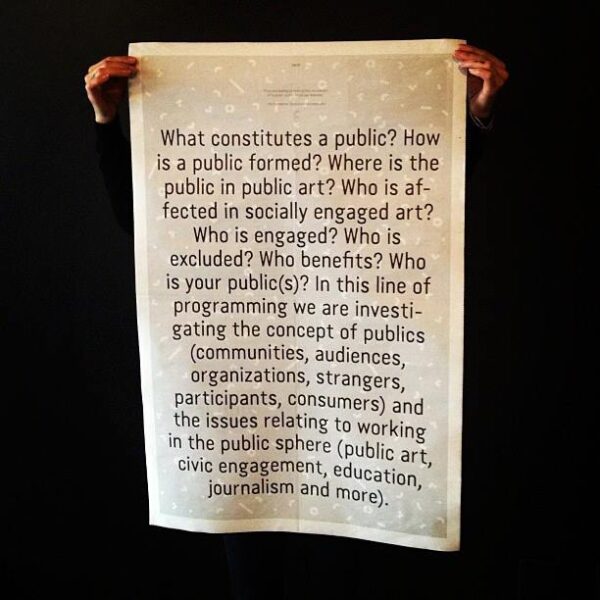 I keep trying to trace emergent themes at Open Engagement. Our organizers have done a good job of marking three umbrella categories, under which each panel, presentation or discussion resides. These headings, Publics, Contexts, and Institutions, feel like hubs through which a larger, interconnected current runs. One conversation bleeds into the next. Institution could be one example of a context, for instance. An institution could also be populated by a Â public, but neither “Contexts” nor “Publics” rely exclusively on “Institutions.” The project of this particular conference, one might say, is to investigate the way socially engaged art practice runs through (or negotiates) those headers.

That said, I am hunting around for additional trends, for theoretical concerns that crop up continually in the subtext of various presentations, reflecting perhaps on a collective undertow that Social Practice artists are preoccupied with. There is something problematic about my efforts. It’s an artificial exercise in a way, especially when the subject of presentations â€” not to mention the styles of address â€” are so broad. My insights are additionallyÂ subjective, stemming from what panels I’ve seen and how the concerns therein stick to my ribs. 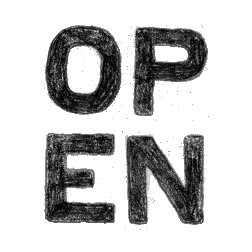 Still, I persist. Obviously this is a post that I deliberately published. Obviously I am interested in failing a little bit. I’m emboldened by the fact that failure, as a topic, is one of those recurring themes. Failure and the equally nebulous question about ethics. These subjects bubble to the surface not only in talks themselves, but also in audience questions. For instance, “I feel there is a danger that the projet you described could waste someone’s time. Someone in your intended audience for instance. How can you be sure you’re not doing that? What can you guarantee your public?” It suggests the artist ought to deliver something, and ideally that whatever is delivered is good, or worthy of (in this instance) one’s time. Ethics and failure are linked up with responsibility in this regard â€” conveying a feeling that something in works of art that rely on audience participation ought to offer or fulfill something.

First let me make a case for the #EthicsTrend. In an account of Friday’s panel, “Sociology (of and) for Socially Engaged Practice, Institute for Art Scene Studies” I was told Pablo Helguera, Barbara Adams, David Peppas, and Adeola Enigbokan staged a kind of reductio proof of what not to do as a social practice artist. I missed it, unfortunately, but heard that someone posed as an artist, presenting a series of ill-advised projects to the panel, pretending to be an artist. (For instance, the acting artist claimed to have done a project where s/he gave up all possessions in order to see what it was like to live under the poverty line.) The panel then critiqued these projects, highlighting what exactly was ill-advised about them. (Using the same example, the panel pointed out that the artist was able at any time to reenter her/his life of material stability). This was relayed to me by a rather horrified member of the audience who, at the end of her account, leaned in conspiratorially and whispered “And it was all a hoax! The ‘artist'” (she used scare quotes) “was making it all up!” seeming at once relieved and frustrated that she had been duped.Â In a later panel that same day, “Whatâ€™s the Harm of Community Arts and Social Practice? The Ethics of Engagement and Negative Value,” Marnie Badham, Amy Spiers, Claude Schryer, and Dr. Kathleen Irwin wrestled with questions of how and when artists intrude on a public. In her opening remarks, Badham noted first, “this turn to community is rarely explored critically,” and then asked “is social change always good?” An ethical approach is often taken for granted in socially engaged art. There is an implied use or service tends to go hand in hand with these social experiments. A desire to save the world, or at least some very small piece of it. 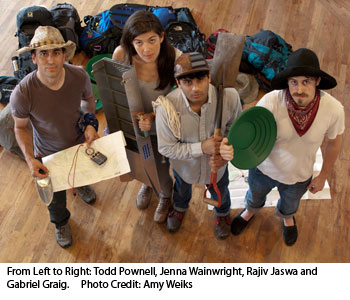 Here the idea of failure comes in â€” because, in a way it is impossible to save the world. However in articulating an attempt, I would argue, the art project sets out to “do” something. As such it becomes easier to measure and assess. Â Rakowitz rebuffed this point yesterday when he suggested that art didn’t necessarily have toÂ doÂ anything. But if that’s the case, one’s ability to measure success and failure becomes more difficult. And, perhaps, more interesting. For instance, this morning at “Craft + Social Practice: A Roundtable Conversation” at the Museum of Contemporary Craft, a group of panelists (Gabriel Craig, Ayumi Horie, Stacy Jo Scott, Michael J. Strand, moderated and organized by Sarah Margolis-Pineo) described their relationship to failure. Many suggested that failures provided new opportunities for insight â€” Gabriel Craig talked about “Slow Gold,” a project based on ethical metal sourcing, where he and four collaborators went to the Black Mountains in South Dakota to find gold for a couples’ wedding bands. (The betrothed couple participated in this project.) They could only find .4 grains. His conclusion, “Mining, no matter what scale it’s on is absolutely catastrophic for the environment.” On that same panel, Stacy Jo Scott of the Craft Mystery Cult confessed, “Occult is always dealing with failure. That’s because we have this desire to speak of ideals, in terms of an ideal poetic space, but also in terms of utopic vision. Knowing the failures of past utopias, but still desiring Utopia. What results is the absurd: optimism in the face of futility.” 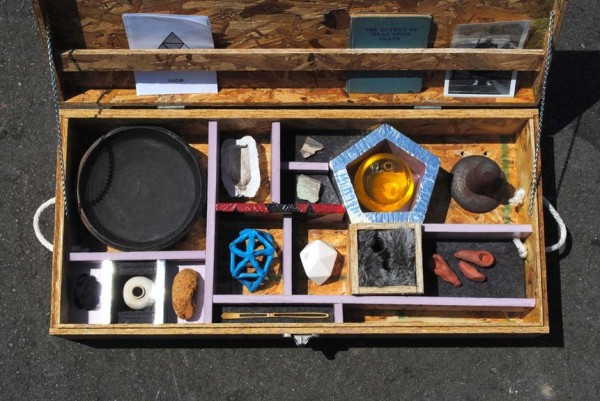 Keep this idea of ethics in one hand. Hold in your other hand the idea of failure. Now imagine yourself in the Shattuck Annex, sitting (like I was) in chair with a small desk attached. It is the sort of desk students often use. The sort of desk I haven’t sat in for years. Keep in mind it is raining outside and the opening bars of Woody Guthries’ “This Land is Your Land” is playing on a loop. People shuffle in slowly. Some are ushered to an overflow room when the room is at capacity. In that room this afternoon, Claire Doherty gave a fantastic keynote, opening with an observation that keynote speakers have the ability to highlight and anchor conversations in a conference. The keynote provides a kind of watering hole â€“ a central point in the middle of the day during which most conference-goers sit in the same room, sharing the same experience, after scattering out again to different panels, rendez-vous, and performances. Doherty hastened to remind everyone about the underbelly of social practice â€” that many projects, while on the one hand providing photographs of an engaged and happy public digging ditches and/or eating ice cream often come out of duress or protest. These works have the ability to engage a collective, public imagination because they tend to address points of tension. She went on to discuss Nowhere Island, a project by Alex Hartley produced by Situations â€” the organization Doherty directs. As a travelling landmass, self-designated as a site belonging to no-country, Nowhere Island became another version of Utopia. Pulled by a tug boat through international waters, it visited many ports, acquiring 23,003 citizens over the course of a single year. There is much more to the story, of course, but I like situating this island in this post because the land mass in an of itself is what Doherty might call a “charismatic object,” a physical object both engaging and alluring to a public imagination. This object was capable of, again in Doherty’s words, “Nourishing the capacity for creative illusion, [such that a public was able] to act and think as though things were different.” In and of itself the island is not ethical, but it enables a public to explore their own Utopian expectations thereby exploring the problems that such ideals might subsequently create.

In Tim Etchells words, “A Utopia of dispute might be better:”

as we stop in the shelter of a doorway in the thunderstorm
S. holds out his hand to check the rain. 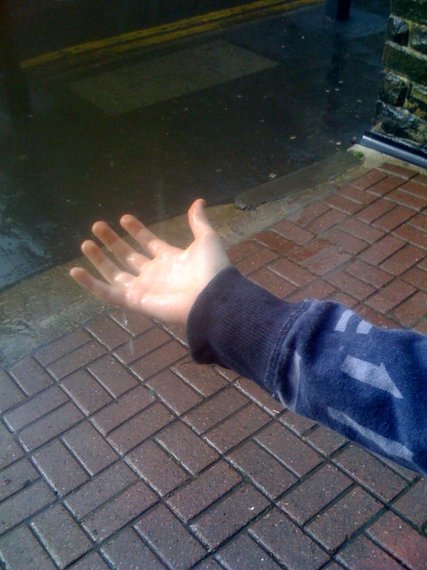 The hand. The flatness of it. The open-ness. The question of it. The directness. The simplicity. The pragmatism. The straightforwardness. The sunshine.