Here are five books I read this month, and pictures of three more. An asterisk means the book (or zine) came out less than 365 days ago.Â (The green polish is Selena Gomez Nicole by Opi. I don’t own the bottle but I did bonk my thumb running for the #18, and a nice lady at the library let me do a touch-up. The silver is Wet n Wild.) 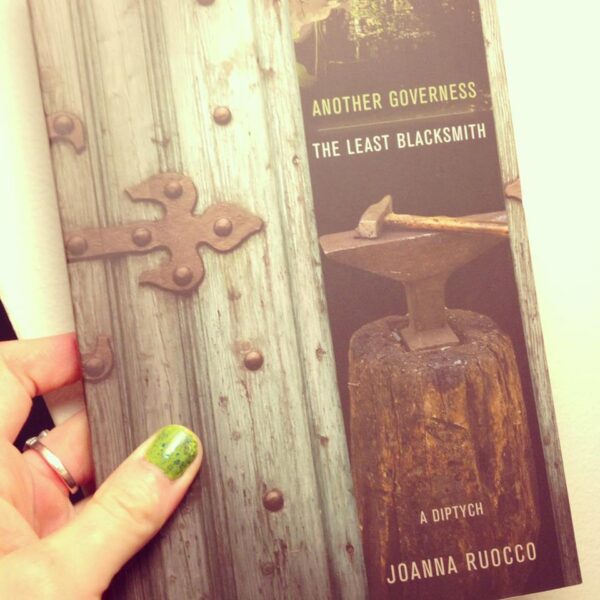 ANOTHER GOVERNESS/THE LEAST BLACKSMITH by Joanna Ruocco (University of Alabama, 2012)

Last summer, the libraries at the School of the Art Institute of Chicago (Flaxman and Flasch) put out a call to faculty, staff, and students who wanted to make their own “mixtape” of favorite holdings in the two spaces. Their picks would then be displayed together on a shelf, for browsing, and highlighted in a takeaway catalogue. Okay, so three issues here: one, technically these are not mixtapes; this “exhibition catalogue” (my phrase) is eleven color-copy pages with a staple in the top left corner; and three, these libraries are in a private institution, so why am I writing about this project here, in a column about (for example) accessibility and openness? Because I love this idea. Even the title cards are cool – designed to look like Side A of a CS90 tape, each features a photo of the mixer, her name, the date, how to find these holdings in which library, actual handwriting, and in Claire Ashley’s piece, a terrific Harlequin-colored doodle. The format makes these holdings fun, available, and visible, which is an awesome move for an academic library to make. (Props too to Terry R. Meyer’s tongue-in-cheek quote from the Pet Shop Boys song “Love, Etc.”: “You need more than / the Gerhard Richter hanging on your wall.”) It is cool too, seeing everyone on one page: faculty with pictures of their kids, recommending titles that have nothing to do, immediately at least, with their current classes; students with rigorous, focused lists about music concrete or the artistic process. Sure, this introduced me to new library holdings but equally importantly, it helped me jumpstart non-weather-related conversations when I bumped into these smart folks on the elevators. I would love to see versions of this catalogue adapted in other public and private spaces – if SAIC is not a daily part of your life and you would like to read my catalogue, email me your mailing address.

Radon isÂ a sincere spoof of Bloomsbury’s popularÂ 33.3 series,Â written by Aaron Cometbus (ofÂ BookThugNation, and Crimpshine, and Cometbus; his fans will notice overlap between this book andÂ CometbusÂ 55, but whatever) and Travis Fristoe (of the Gainsville Public Library, and reactionary 4, and america?).Â It’s the same size and design as that series (which I love and support), however instead of looking at one album in full this one covers a 45, the self-titled and only LP out from Radon, a 90s punk band from Florida. “Probably they weren’t any more schizophrenic or suicidal than their peers,” writes Cometbus, “but they were more artful at expressing it.” RadonÂ doesn’t really try to describe how the band’s music sounds, which was annoying at first because, why hack the 33.3 look if you’re not trying to one-up or critique it? Instead RadonÂ is a split meditation on what punk music is, and why, and why it’s important to write songs about where you’re from. That’s a pretty nebulous book to be, but somehow dudes got away with it without going all bro-nostalgiafest on us, or talking down. This is a book about loving a band.Â “Music history is useful,” writes Fristoe, “so are facts, but each lonely person in their bedroom listening to records is an equal, valid force.” My favorite descriptions are when Cometbus writes drummer Bill Clower as a short order cook (“The steady sizzle of his hi-hat is comforting, making me feel like I’m in a greasy diner and breakfast is on its way.”), and Fristoe compares Radon’s lyrics to a passage from Mary Robison’sÂ Why Did I Ever?Â – a bookÂ he read this summer, a decade later, that reminded him of the band. As usual with a Cometbus joint, the times I’m frustrated by Aaron’s uncompromisingly purist aesthetic are soon rendered moot by a cool metaphor he uses or the empathetic, even tender way he’ll describe a crowd. This is a book that sets its own rules and follows them well.

The WaysideÂ by Julie Morstad

The WaysideÂ is a gorgeous collection of ink-and-watercolor illustrations by Julie Morstad, a Vancouver BC artist whose foxes and bodiless heads you might recognize from Neko Case’s 2006 album. For the most part Morstad’s drawings connect tonally (women with hair like windy tentacles, deep burns of color, flowers with eyes) not sequentially, though there is a short story at the beginning of the book, about a girl who meets a person whose body is totally covered in a veil – like the Ghost of Christmas Future only without a graveyard. This is why I love Morstad: she looks like she might be Too Cute but she’s not; there are no birds on anything. Her veils are curtains not gauze, the bodies under them oracles not dead brides. Sure her characters are gendered, with breasts and dresses, but their eyes are not doe-y and childlike and their mouths are focused, curious. These ladies are often shown using sticks as divining rods or clubs or canes, or something to whittle in a corner. Time for Morstad is either trapped in amber – I love how she draws crowds, suspended – or whirligigging. In one panel a skylight opens like a mouth, a cast turns into a leg into a tree stump. The next page is a new story. The best surprise of all is that this is not a book since relegated to the “look at the cool independent graphic art books I own” shelf; I’ve kept reading it and the light catches something else every time I do. 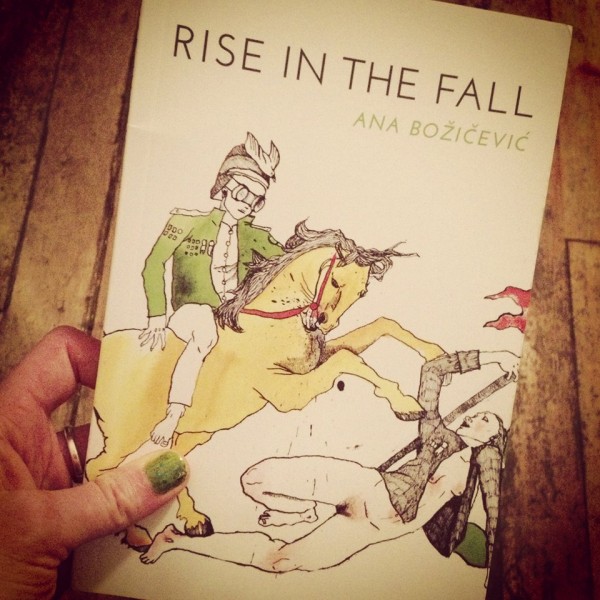 The Long GoodbyeÂ by Meghan O’Rourke

I grew up Irish Catholic and I like the Cure, plus I’m Scorpio, so of course I’ve always been attracted to and scared of death. I’ve often picked up Meghan Oâ€™Rourkeâ€™s memoir – her mom died of cancer at fifty-five, leaving Meghan the only girl in the family – but I didnâ€™t take it home until the beginning of last summer, when I started a project I thought was probably also about death and family. I hoped her book would be both medicine and a guide. It is, even the parts I donâ€™t relate to, like summers in Vermont or life without public ritual. Oâ€™Rourke writes honestly, even beautifully, about trying to understand why her mother isnâ€™t here anymore, and how she could be in so much pain, her and her mom both, and how to go on. O’Rourke writes as a person with a body and as a daughter but never selfishly, just trying describe the experience as immediately and specifically as possible. â€œThere is our mother, and then, suddenly, there is our cancer.â€ Oâ€™Rourke quotes from research too, novels and poemsâ€”Elizabeth Kubler-Ross, C.S. Lewis, Don DeLilloâ€”first objectively, then personally. (Is this how I am supposed to feel? Is this how I do feel? Is that whatâ€™s next?) I left The Long Goodbye behind when I left town this summer (I was traveling light), and picked it back up a few weeks ago when a family member began actively dying. To my relief, it made me feel less alone in my grief, less crazy too, and the heartbreaker final graf helped me support my family as a daughter as well.

You’re So Sexy: When You Aren’t Transmitting STDsÂ by Isabella Rotman

I saw this comic – with its glossy, pea-green cover, staple-bound and barcoded – on a newspaper stand and picked it up because there was a condom glued to the back and it said SEXY in bubble letters on the front, and it was free. Dedicated to “anyone who is having sex, has had sex, or plans on having sex ever,” this fifty-six-page text expands on three key points: communication is key, getting tested regularly is important, and most STDs are transmitted through bodily fluids so reducing contact with them reduces risk of infection. This is a solid tripod, and Rothman’s pitch is too. She’s in full-on smart older sister mode but firmly, with zilch emotional projection or squeamishness. Each page has a differently dynamic layout, however images and text do not really directly interact (as they do in Ellen Forney’s comics about sex, for example), but that’s cool because it makes the reader feel like part of the dialogue instead of an observer. Cisgender is defined on the first page, consent on page ten and at length. Options and STDs are presented clearly, by characters with kind eyes and different kinds of bodies, and there is a bibliography in the back. My only disappointment was that Rotman’s main narrator, Captain Buzzkill, is named weirdly (because knowledge is a turn-on! as Rotman says herself) and drawn a little weirdly too, with a muscled body and heart-print boots, like a frat boy on Halloween – then again, Buzzkill is a sharp, reliable guide so who am I to judge, especially when a spectrum of other characters are represented here too? I especially loved Rotman’s bent mermaid on the last page, with a long long tail knotted into infinity, and how she drew the woman on page twenty-four, looking at herself in a handheld mirror. The woman’s right big toe is out at an angle, helping her balance while she looks. I would give this book to my own little sister, and I took some tips from it myself. 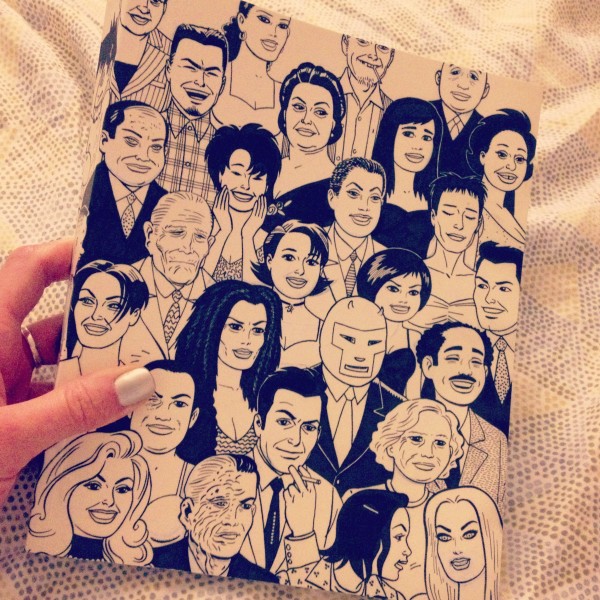 THE LOVE AND ROCKETS COMPANION, edited by Marc Sobel and Kristy Valenti (Fantagraphics, 2013) 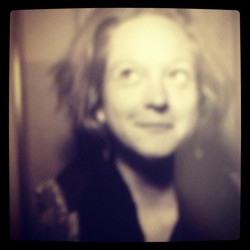