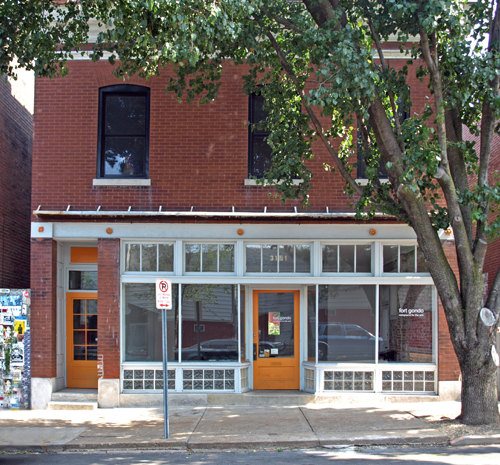 Itâ€™s a freezing afternoon on Martin Luther King, Jr. Day and Iâ€™m sitting in the kitchen of Galen Gondolfi and Jessica Baran. We are surrounded by their marvelous collection of chrome toasters, heart-shaped cake pans, and other vintage housewares. Joining us briefly is Toronto-based artist Benjamin Edelberg, whose two-person exhibition alongside St. Louis artist Brandon Anschultz, All That Heaven Allows (curated by Baran), opened downstairs at Fort Gondo Compound for the Arts two nights before. Gathered to talk shop, we pause for a moment to watch Gondolfi and Baranâ€™s dog Benny attempt to peel a clementineâ€”one of his many talents, they tell me.

Benny is one of four dogs owned by the couple, who live above Fort Gondo (known to many simply as â€œGondoâ€), the eponymous St. Louis venue Gondolfi started in 2002. In fact, it was initially intended to be a dog shelter. When he bought the building, he knew he wanted to open the street-level space with some sort of community-based mission, but the prospect of creating a home for cast-off canines failed to come to fruition. Rather, it evolved into an art space after Gondolfi and friends Mike Schuh, Bevin Fahey-Vornberg, and Dave Early began staging flash mob-like events across the city as the artist collective â€œnamedâ€ Untitled. Soon they hosted an event in the space that attracted nearly 400 people. The performances continued. Ergo Fort Gondo. 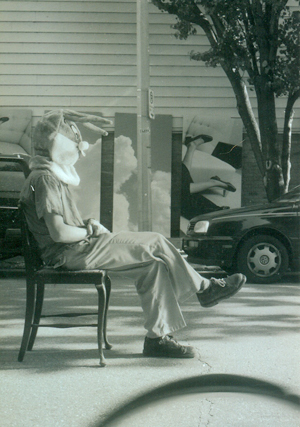 Galen Gondolfi, “Roadkill,” 2002. “A performance in the middle of Cherokee Street. I was ultimately punched by a guy in a red sportscar (not planned, but nevertheless painful and effective).” â€” GG (Photo: Carey Horton)

The venue is situated at the western end of Cherokee Street, now an established St. Louis arts district home to antique stores, art spaces, cafes, bars, print shops, and a record store, as well as the epicenter of the cityâ€™s Mexican community. Real estate remains plentiful and cheap, and Gondolfi, who owns several buildings on Cherokee, is credited with jump-starting much of the neighborhoodâ€™s revitalization. Besides founding Fort Gondo, his contribution includes other short-lived creative endeavors such as the â€œlaptop-freeâ€ coffee shop Typo and a gallery that exhibited only female artists named Beverly (2005-2007), after Gondolfiâ€™s mother. Within a year of his arrival, he became president of the Benton Park West Neighborhood Association and subsequently ran for alderman in his ward in 2007 (losing to a 12-year incumbent by a mere 76 votes).

But when he moved here in the early 2000s, he was one of three people living on the block. The neighborhood was essentially vacant. Gondolfi gets admittedly â€œmaudlin and nostalgicâ€ about Gondoâ€™s early years, even though he experienced two break-ins within 48 hours of receiving the keys. But such a ghost town-like atmosphere also offered him carte blanche to get weird. He tells me how the building next door had suffered a fire so he would host events in its shell, turning it into a venue called Burn Out. There were vacant lots on either side, so he installed his entire bedroom in one of them and asked people to get into bed with him. Later on he and Early, his business partner, started Radio Cherokee, a â€œproletarian speakeasyâ€ that presented hundreds of shows between 2002-2006 (including a basement gallery called Low Art and an exterior billboard venue named High Art). The joint was electricity-free; bands played off of extension cords. The entire block, Gondolfi recalls, â€œwas like a playground. Nobody cared about the rules at that point. Gondo was incredibly cavalier and renegade in those early days.â€ 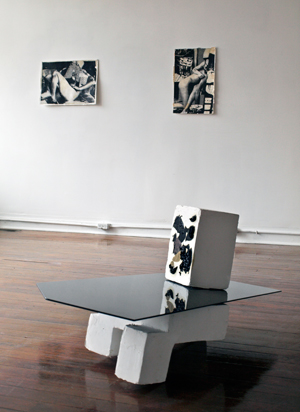 Gondo soon became a regular part of Gondolfiâ€™s creative life and eventually Baranâ€™s as well (they married in 2011 after meeting through Gondo-related programming; she also exhibited at Beverly). Though the space is synonymous with Gondolfi, he is quick to point out that countless numbers of people have been involved. â€œIt is not an extension of me, but rather it has been a group effort all along. Gondo has been one 10-year running group show, if I think about it. So many people have come back to do other showsâ€¦Gondo is part of my life but is not an extension of myself. Itâ€™s never been the top priority in my life but has always been there. In some ways itâ€™s like a cockroachâ€”it never dies. I merely essentially paid the mortgage and that allowed whatever chaos to ensue.â€

That chaos has come to include a vibrant â€œprogram of non-programming,â€ as Baran puts it: more than 500 intergenerational exhibitions, rock shows, poetry readings, town meetings, political fundraisers, religious services, birthday parties, yard sales, weddings, and other various and sundry happenings. Countless now-established local and national artists have presented their work at Gondo, including four who went on to win the Great Rivers Biennial, the preeminent local artist competition organized by the Contemporary Art Museum St. Louis (full disclosure: my employer). Even with all this activity, Iâ€™m surprised to learn that over 100 keys to the space are currently in circulation. â€œDo you have one?â€ Gondolfi immediately asks me (he made three new copies that day). The couple readily welcomes the â€œmi casa es su casaâ€ vibe engendered by both the space and their apartment. Yet occasionally the open-door policy can be taken a little too literally. Likening Gondo to the spontaneous anything-goes (and potentially depraved) ethos of a bathhouse, Gondolfi notes that a mysterious visitor used their shower the other night. But more lamentable to him is the fact that three rubber duckies from their extensive collection are now missing. 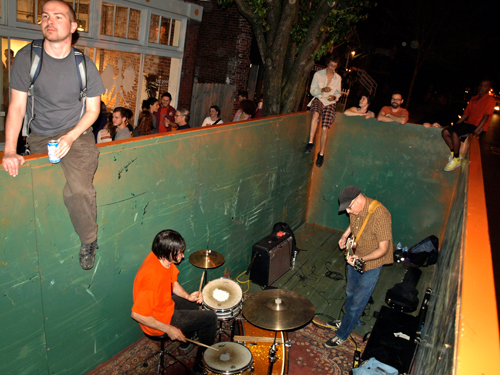 The snacks keep coming. Gondolfi turns off a few lights in the kitchen to avoid blowing a fuse while running the microwave. Over burnt popcorn, the conversation shifts from reflective to anticipatory. The space celebrated its 10th anniversary last year with a series of exhibitions he collectively called â€œIdentity Crisis.â€ He invited people that had participated in the history of the spaceâ€”â€œfriends and foes alikeâ€ who had shown in the gallery or been instrumental in some wayâ€”back to do something new. Ten years is a long time for any art space, and Gondolfi, who also holds down a full-time job as Chief Communications Officer of Justine PETERSEN, a national microlending agency based in St. Louis, is admittedly tired. Following a year of intense self-scrutiny, he has recently demoted himself from proprietor to facilities manager.

Meanwhile Baran, who co-organizes Gondoâ€™s poetry series with poet Jennifer Kronovet, is assuming full reign. A poet, curator, and professional art critic, she was also Assistant Director of White Flag Projects from 2008-2012, providing incalculable grist to the respected contemporary art space during its formative years. Ever self-effacing, Gondolfi jokes that, â€œI ushered Gondo through the Cro-Magnon era and with Jessica taking over weâ€™re going to start walking upright.â€ Baran is in the midst of planning a new exhibition program, and they are now awaiting formal 501(c)3 status. Gondolfi, meanwhile, sees his new freedom as an opportunity to possibly pursue animal rights work, or else conceive of his own idyllic artist commune in nearby Illinois, a la The Poor Farm or Mildredâ€™s Lane. 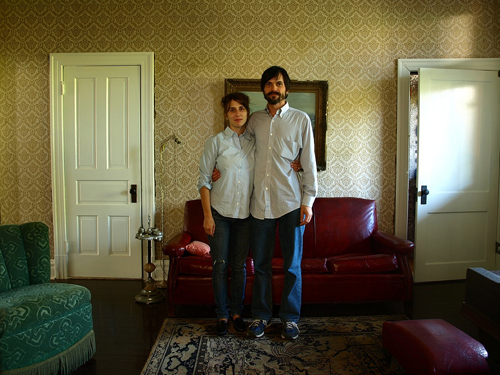 â€œFort Gondo has always been pro-failure,â€ Gondolfi made a point of telling me early in our conversation. He readily confesses that, â€œa lot of abysmal art has been shown here. Sometimes I canâ€™t look at the walls when I come home at night.â€ But thatâ€™s because the spirit of the space has heretofore been less about discerning taste or aesthetic than about democratic and abundant opportunity. While this may change under Baranâ€™s leadership, Gondoâ€™s mission will always privilege creative over material capital. It revels in the freedom to fail, emboldened by the production and presentation of culture on its own terms. Sure, this may be a privileged way to operate but itâ€™s also very St. Louis, the entrepreneurial land of beer barons, newspaper magnates, and other founder-driven entities. Where itâ€™s possible for a once anarchic community center-cum-established art space to continually fail better. 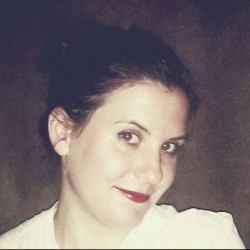 Kelly Shindler
Kelly Shindler has worked in the field of contemporary art exhibition and programming for over ten years. She is currently Assistant Curator at the Contemporary Art Museum St. Louis (CAM), where she will present forthcoming solo exhibitions with Lari Pittman, Mika Taanila, and Josh Faught in 2013. Prior to joining CAM, she worked at Art21 and founded the Art21 Blog. She holds dual MAs in Modern Art History, Theory, and Criticism, and Arts Administration and Policy from the School of the Art Institute of Chicago.