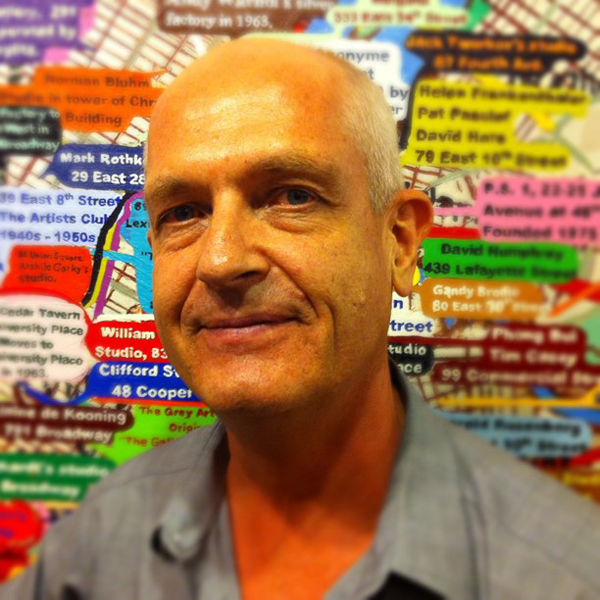 This week: Amanda and Richard talk to Loren Munk about his career, his paintings and his secret life as James Kalm of the Kalm Report.

The artist Loren Munk (born 1951) is a maker of contemporary paintings. He is known among New York artists primarily for his cubistic paintings of urban imagery. Munk also has received accolades for his drawings and mosaics. He differs from traditional mosaic artists by the manner

Munk’s work debuted in SoHo in 1981 with a double show at J. Fields Gallery and Gabrielle Bryers. Since then, he has overseen a truly international career. In addition to exhibiting in Brazil, France, Germany and the United States, Munk has received national and overseas, public and private commissions. He is well represented in important collections throughout Europe, South and North America and the Middle East.

Most recently, Munk has been producing a series of paintings which tackle the subject of art itself through a historical and diagrammatic lens. Also, he has expanded upon his role in the artistic community, publishing numerous reviews and essays, curating and promoting several shows, and offering his acknowledged expertise on the Williamsburg arts scene.

Munk documents the New York art world in YouTube videos, using the name James Kalm. The Kalm Report is shot from a first person perspective using a hand held camera. Kalm arrives at an art show by bikeâ€”he calls himself “the guy on the bike”â€”and then walks through the show while providing commentary.