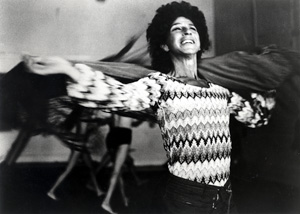 Anna Halprin (b. 1920) is a pioneering dancer and choreographer of the post-modern dance movement. She founded the San Francisco Dancer’s Workshop in 1955 as a center for movement training, artistic experimentation, and public participatory events open to the local community. Halprin has created 150 full-length dance theater works and is the recipient of numerous awards including the 1997 Samuel H. Scripps Award for Lifetime Achievement in Modern Dance from the American Dance Festival. Her students include Meredith Monk, Trisha Brown, Yvonne Rainer, Simone Forti, Ruth Emmerson, Sally Gross, and many others.

Printed Matter, Inc, the New York-based non-profit organization committed to the dissemination and appreciation of publications made by artists, will host a Benefit Auction and Selling Exhibition at the Rauschenberg Foundation Project Space to help mitigate damage caused by Hurricane Sandy.

As a result of the storm, Printed Matter experienced six feet of flooding to its basement storage and lost upwards of 9,000 books, hundreds of artworks and equipment. Printed Matter’s Archive, which has been collected since the organization’s founding in 1976 and serves as an important record of its history and the field of artists books as a whole, was also severely damaged. Moreover, the damage sustained by Sandy has made it clear that Printed Matter needs to undertake an urgent capacity-building effort to establish a durable foundation for its mission and services into the future.

This is the first fundraising initiative of this scale to be undertaken by the organization in many years, and will feature more than 120 works generously donated from artists and supporters of Printed Matter.

The Sandy Relief Benefit for Printed Matter will be held at the Rauschenberg Project Space in Chelsea and will run from February 28 through March 9th. The Benefit has two components: a selling exhibition of rare historical publications and other donated works and an Auction of donated artworks.

A special preview and reception will be held February 28th, 6-8 pm, to mark the unveiling of all 120 works and to thank the participating artists and donors. The opening will feature a solo performance by cellistÂ Julia KentÂ (Antony and the Johnsons), followed by a shared DJ set fromÂ Lizzi BougatsosÂ (Gang Gang Dance) &Â Kyp MaloneÂ (TV on the Radio). The event is free and open to the public.

All works will then be available for viewing at the Rauschenberg Project Space March 1 â€“ March 9, gallery hours.

All Selling Exhibition works may be purchased during this period and Auction works will be available for bidding online. Bids can be made atÂ www.paddle8.com/auctions/printedmatter.

A live Benefit Auction Event will take place March 9, 6-8:30 pm with approximately 20 selected works to be auctioned in a live format. Bidding on these works will commence at 7pm sharp, while silent bids can be made on all other Auction works. Note, highest online bids will be transferred to the room. For absentee bidding of works, please contact Keith Gray (Printed Matter) at 212 925 0325 orÂ keith@printedmatter.org. The evening will feature a performance byÂ Alex WatermanÂ on solo cello with electronics. Admission is $150 and tickets may be pre-purchasedÂ here. There will be only limited capacity.

Co-chairs Ethan Wagner & Thea Westreich Wagner and Phil Aarons & Shelley Fox Aarons have guided the event, and Thea Westreich Art Advisory Services has generously lent its expertise and assisted in the production of the auction.

â€œNot only are we hopeful that this event will help us to put Sandy firmly behind us, it is incredibly special for us. To have so many artists and friends associated with our organization over its 36 years come forward and support us in this effort has been truly humbling.â€œ