Recently, while trolling the facebook site for Works Progress, an artist-led public design studion in Minneapolis, I came across a thread on Colin Kloecker’s page (who co-runs the studio with Shanai Matteson) compiling a list of must-reads on the subject of Creative Place-making. What I gathered from the thread and then from talking more with Colin is that we share an interest in how new funding opportunities, that are becoming available under the rubric of “creative place-making” (most significantly through granting organizations like ArtPlace), are affecting and intersecting with socially-engaged practices. Most recently this conversation came up in Chicago when Theaster Gates’ Rebuild Foundation along with the University of Chicago and the Bruner Loeb Forum held a conference called The Art of Place-making. 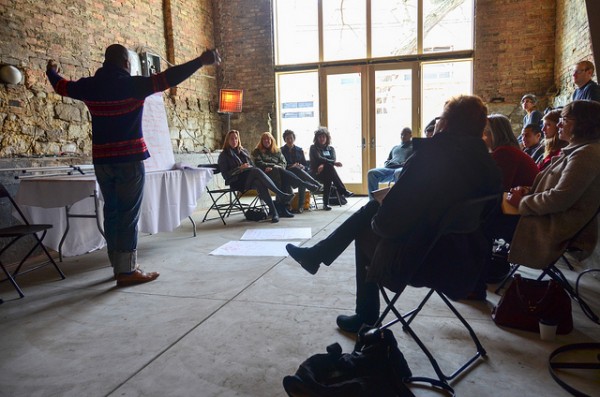 Artplace was there in attendance, my highlights were the presentations by Kennedy Smith and Walter Hood, presenting on the importance of small business development and creative urban design respectively (arguably the two poles of Theaster’s initiatives.) There were tours of the various properties and lots of conversations about what is unfolding at Dorchester Projects, Stony Island Arts Bank, the Washington Park Arts Incubator, and all the rest in development. Â One of the moments that stood out for me came in a meeting leading up to the actual conference where Theaster convened community members, local organizations, and neighbors at Dorchester Projects to talk about what was going to happen at the forum and getting feedback on a smaller-scale. I ended up in a break-out group on the Washington Park Arts Incubator and the community-building initiatives now in formation. I don’t pretend to fully understand the complexity of that project, in that neighborhood, with that set of partners, and while I am really excited about what’s happening there, I am also struck by the enormous responsibility being placed on an artist residency program sited in a neighborhood with a historically decimated economic infrastructure. A lot of people spoke about needing educational programs or job training, or of the difficulty in explaining to the neighborhood why they should embrace this place. Â And I thought, this is a really complex, long-standing socio-economic context to wade into and a lot is being put on artists to have a significant impact in the shaping of that conversation. Perhaps that’s just naive, but I also think it bears repeating. These issues are really, really complicated, the struggle against gentrification is a hard battle and the issues of good versus bad economic development are very deep and hard to parse out. And it is kind of a bizarre world in which artists are put forward to lead the way, while being asked to speak about economic development and community impact. Perhaps that’s where they should be, I’m not sure.

So with that in mind, while cribbing Colin’s list and adding some of my own, I thought it would be interesting to compile a list that reflects the dialogue as it is in this very moment. With the 10th anniversary of Richard Florida’s book “The Creative Class”, the much-criticized and massively influential book on urban development that ties arts funding to innovation culture and business development, rather than inherent social good, we’re primed to revisit the failures and the successes that are now the received wisdom as to the state of arts funding.

Creative Place-making from the government:
The original white paper from the NEA
In creative placemaking, partners from public, private, non-profit, and community sectors strategically shape the physical and social character of a neighborhood, town, city, or region around arts and cultural activities. Creative placemaking animates public and private spaces, rejuvenates structures and streetscapes, improves local business viability and public safety, and brings diverse people together to celebrate, inspire, and be inspired.

And from ArtPlace on “Vibrancy Indicators”
ArtPlace is a collaboration of 13 leading national and regional foundations and six of the nationâ€™s largest banks. ArtPlace is investing in art and culture at the heart of a portfolio of integrated strategies that can drive vibrancy and diversity so powerful that it transforms communities. To date, ArtPlace has awarded 80 grants to 76 organizations in 46 communities across the U.S. for a total of $26.9 million.

And then the analysis:

Dead End on Shakin’ StreetÂ in which Thomas Frank explains how Creative Place-making pitsÂ Cincinnati versus Rockford versus Kansas City versus Akron in the vibrancy test. It is perhaps unfair to pit funds for city tourism over what should go towards universal health care coverage, but it might as well be put in perspective. A very trenchant and important critique here.

This guy has some beef with Frank, writing from Asheville, NC.Â I think he misunderstands Frank’s larger point which to me is about pointing out the disinvestment in the public sectorÂ on a wide scale, not that universal health care is being specifically defunded via the millions spent on vibrancy initiatives. He also writes for what looks like a marketing firm called Placemakers. Â They “cultivate livability.”

The Fall of the Creative Class, a first person story of why following Richard Florida’s plan to the letter in deciding where you live might not be a good idea by Frank Bures. Madison-bashing and a totally baffling set of unrealistic expectations aside, this has some good analysis. Also as a side note, the part in here where an overweight woman who he imagines as never leaving her apartment stands in as a symbol of his existential angst is totally problematic. Fat people are not signs of the world coming to an end.

Richard Florida responds to Bures directly hereÂ in his “What Critics Get Wrong About the Creative Class and Economic Development” which is basically a rehash of the correlation versus causation debate and then Bures responds back here. And more from Richard Florida inÂ More Losers Than Winners in America’s New Economic Geography.

And here Florida talks at the Aspen Ideas Festival with our retiring NEA chairman Rocco Landesman who cannot wait to spend more time in Miami Beach.

Ian David Moss from Fractured Atlas and Create Equity blog (which is really good) has some great analysis Â in Creative Place-making has an Outcomes Problem. This will truly take you deep into art administration nerd-dom but his critique of ArtPlace and its vibrancy indicators is coherent and worth reading. And there are links at the bottom of his post that will lead you to more Florida backlash.

Roberto Bedoya on Creative Placemaking and the politics of belonging and dis-belongingÂ writes about creative place-making strategies of community engagement not adequately meeting the challenges of spatial justice and how “place-making” has to contend with the very real histories of displacement, colonization and indigenous struggles. As Bedoya writes, “Creative Placemaking activitiesâ€™ relationship to civic identity must investigate who has and who doesnâ€™t have civil rights.”