The Floor Gives Away: An Interview with Ann Toebbe 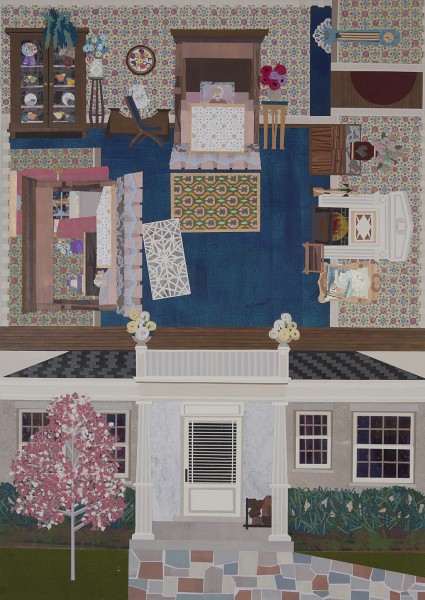 Ann Toebbe is well known for her stylized, architectural paintingsÂ â€” paintings of empty rooms occupied only by objects. These are rooms at rest, between uses, and the furnishings within them stand enigmatic and remote, at once pointing to a network of human relations while being simultaneously autonomous; it is as though these thingsÂ areÂ preoccupied with a non-human work. Toebbe’s chairs seem to be doing very well for themselves, even when not fulfilling their intended, anthropocentric function. In her latest solo show at ebersmoore,Â The Inheritance,Â Toebbe introduces humans for the first time. The human figure shares space with its furnishings, pointing to a narrative that seems, at first, more accessible. It is a narrative that invokes the artist’s biography as well. By way of a press release, we learn that these ornate tableaus tell a story of inheritance and greed â€” â€œDorothy and Jessie also left shares of their P&G stock to their handyman and caretaker, Ron; to their church pastor, and to a man from their church named Loreaux. But when Dorothy and Jessie died, Loreaux claimed a greater share and sued the estate. While the lawsuit was pending the stock market crashed; by the time it was all over, the fortune was all but wiped out. Toebbeâ€™s parents had counted on the inheritance for their retirement, but because of Loreauxâ€™s greed, all they inherited was frustration, disappointment, and anger.â€ While this narrative hovers like a background noise, the figures depicted seem remote from it at first. They stand or sit, static as any area rug, bed or book case. Together, these various, human and non-human, elements conspire to create an illusion of stability and cohesion, an illusion that ties in directly with our expectations of domestic life. The home is supposed to be a solid and reliable structure. It never is simply that, however, especially when one considers the transmission of its objects between generations. As a result the given narrative reminds the viewer that what one assumes based on a constellation of objects is only ever half of the whole story. While Toebbe presents calm scenes of the home, she nevertheless reminds us of an unpredictable and dynamic vitality therein, incorporating shifting POVs and gestural marks that evoke the emotional somersaults in a home and its family. Somersaults not always visible from the sphere of personal affects. It is perhaps the way any home works, being at once functional and flighty, recognizable and strange.

Caroline Picard: How do you think about the objects in a given space?

Ann Toebbe: I have a knack for flattening space. It wasnâ€™t considered a great asset in my early training in drawing and painting but I have cultivated my skewed perception â€” often called folk or faux naÃ¯ve â€” of space. I imagine objects flat first, then bend and fold them in creative ways to make everything fit in a given room. 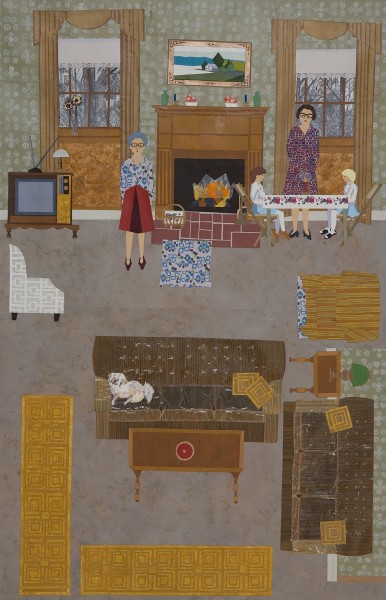 CP: Yeah, there are points in a given painting with the orientation of a viewer to the scene will completely shift form, for instance, a birdâ€™s eye view transforms into an eye level sight line.

AT: I started out using predominantly a birdâ€™s eye view. My early paintings look like cardboard boxes with the lid taken off. Youâ€™d look in and see a room in my version of three-point perspective. I drew the lines of the wall in perspective making the floor look like it was in deep space. As I painted more rooms the architecture flattened out â€” itâ€™s simpler for me to unfold the walls rather than try to use extreme perspective to include everything. The rooms are unstable in terms of gravity but since I know from the start how the painting will be oriented and place things accordingly, they feel grounded.

CP: Thatâ€™s whatâ€™s so striking to me: even though the POV shifts dramatically, the objects you paint feel grounded and stable â€” even the way you incorporate materials like doily fabric, or the grounding pattern running across the floor â€” everything has this visual tactile quality, but then you’ll suddenly twist the POV â€” can you talk about that a bit?

AT: The Inheritance is my first mixed media show. I included fabric from my momâ€™s wedding dress, yarn, store bought Christmas lights, and grass paper intended for train sets. My mom inspired The Inheritance and she loves kitsch. 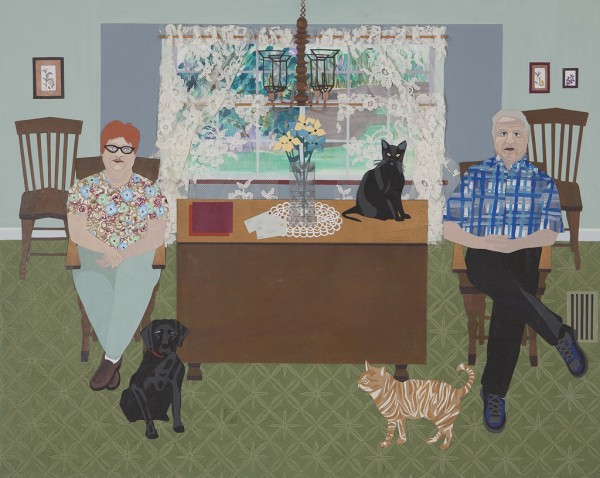 CP: This is the first time I’ve ever seen you incorporate the human figure into your work â€” how did that transition came about? Did the human form felt like an intrusion in your conception of space?

AT: Iâ€™ve wanted to include the figure for a while. I canâ€™t count the times Iâ€™ve been asked why human figures arenâ€™t there or if Iâ€™d ever include them. I wanted to give it a try â€” why not? I just had to come up with the right body of work. Without figures the mood or emotion in the rooms is very different â€” itâ€™s still or even embalmed. The rooms represent many similar memories compressed into one picture â€” so the paintings are always in the past and the memory centers around how the room was decorated and the furniture arranged.

The Inheritance is a story about a specific time and place and also about a specific set of relationships. The people donâ€™t feel like an intrusion in this particular body of work. It wouldnâ€™t have been interesting to paint the rooms without them.

CP: What is the difference between living subjects and furniture in your paintings?

AT: Itâ€™s not evident from the digital images but the figures and furniture in The Inheritance are cut paper collage not painting. I constructed everything in the rooms with the same level of care and detail â€” a folk art thing. The furniture and figures are stiff, sort of like a carved wood sculptures. I carefully chose the figuresâ€™ poses especially how they positioned their hands and feet. A posed figure is different from placed and positioned furniture. The figures change the role of some of the furniture. Instead of being stand-ins for the figure, as in previous paintings, the chairs and couches become props for the people sitting on them.

CP: What is it about the domestic setting that compels you?

AT: I started using domestic settings in New York in my twenties. I lived in Brooklyn and was homesick. I had no real intention of returning to Ohio but at the time everything in my life was topsy-turvy and uncertain. I stumbled into painting interiors because it felt comfortable and so many things about living as an artist made me uncomfortable. The funny thing is now that my life is more like Ohio, I miss unruly Brooklyn; so Iâ€™ve made several paintings about my Williamsburg apartment. Painting interiors calms me down and allows me to focus on formal concerns â€” composition, color, shape, texture. I spend my studio time inventorying life and putting things in order, this works for me as an artist.

Thereâ€™s a story behind each painting and collage. In the early work they were my stories â€” sleepovers at my grandmotherâ€™s farm, mopping my kitchenâ€™s white tile floor, the neighbors messy house where I babysat. In the newer work I ask people to draw and describe rooms from their memory â€” my husbandâ€™s apartment with his ex-wife, my momâ€™s attic bedroom growing up, my uncleâ€™s one bedroom apartmentâ€¦ 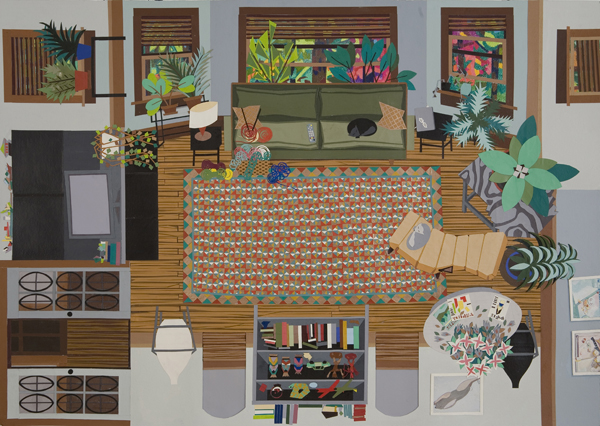 CP: I am also really interested in your depiction of the outdoors â€” the “natural” landscape is always framed by a window, and your treatment of that outdoors is totally different, the way you describe trees, for instance, feels much more gestural and abstract â€” as though it is composed in a different vocabulary of mark making. How did that variation came about, and what does it say about the domestic tableaus you create?

AT: A friend told me that he knows my world until he looks outside my house.

I take a lot of liberty in painting the outdoor views that will be covered by curtains or partially hidden from view by furniture. I desperately want to paint loose and to be expressionistic and these obscured outdoor spaces give me the opportunity to be painterly. I use washy, sponged, and pooling paint in the window views in the newer work. Another clue that the room is a painting and isnâ€™t grounded in reality.

CP: Maybe this also ties into a similar idea of framing and mark-vocabulary, but I you also quote other paintings â€” you know, because it’s a domestic scene so of course these people have paintings on the wall, and then you copy them. But here again, there is a stylistic break that I’m really interested in. What happens in those moments? Those little framed images also feel so pastoral, or decorative, and that seems like a kind of meta-conversation that you are having as a painter painting these very decorative, domestic tableaus…..does that make any sense?

AT: Perfect sense! My compositions are made up of the all objects in a room. And as you said this includes the artwork or pictures on the walls. My approach or technique for depicting the art within the art is to do what is most economical. For cats or fruit I look online for simple images and abstraction often comes from cut outs of paintings made by my young daughters. The miniature art works channel the Sunday painter in me along with my admiration for dollhouse craft. Itâ€™s much easier to paint small â€” each little artwork can be very detailed but only takes an hour versus weeks to make.

The stylistic breaks you mentioned, the outdoor spaces and miniature artworks, are ways for me flex different artistic muscles and at the same time ride the balance between modern and folk and representation and abstraction.