Sense as Consenus: An Interview with Justin Cabrillos 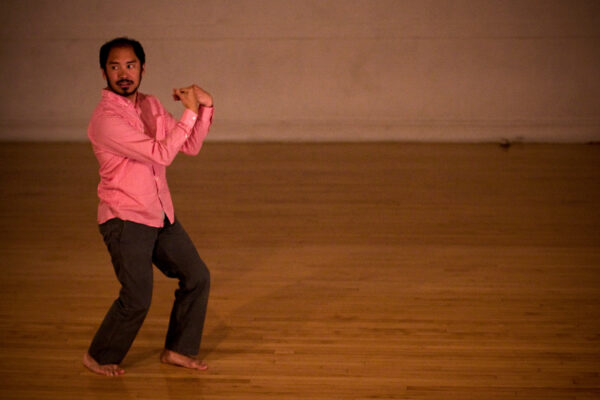 Many of these discussions about hybridity seem to center on the borders of identity: those places we feel something might end so that another substance, or self can begin. Language is essential in the communication of those boundaries; it enables a consensual agreement. The very act of naming, for instance, differentiates one body from another. I am curious about how language is embodied and how an artist invested in movement-as communication might explore that position. I thought I could interview performance artist, Justin Cabrillos. He is particularly focused on how the body and language relate: what seemed like an additional progression from myÂ last discussion with Vanessa Place. Drawing on elements of dance, performance art, poetry, and sound art, explores an inefficient use of breath, the valleys of nonsense and physical exertion. Cabrillos was an IN>TIME Incubation Series artist-in-residence at the Chicago Cultural Center, and a 2011 LinkUP Artist at Links Hall. He recently collaborated with Every House Has a Door in a performance for artCENA in Rio De Janeiro. He is the recipient of a Greenhouse grant from the Chicago Dancemaker’s Forum.

Caroline Picard: I’m interested in how you integrate language and the body: there is something about this process that makes a lot of sense to me, in so far as both the body and language are mechanistic. In your performances, you seem to embody the two at once, calling attention to the ways in which the body gives life/animates language. At the same time, I feel like you also illustrate a kind of twitch or glitch in both, as they mergeÂ  â€” is there some way that you could talk about this?

Justin Cabrillos: Thatâ€™s a nice way of putting it. The body does give life to language. Iâ€™m particularly interested in the twitch, tremor, trauma, and the body in crisis because it calls attention to those different kinds of bodies, which language can inhabit and can be transformed by. In my most recent piece, Troupe, I often worked with generating flow in movement and in text, which I would then disrupt, physically orÂ vocally, with a twitch. Somehow that moment of twitch or of crisis speaks to one of many processes of giving life to the body and language. When I was making Troupe, I would oftenÂ  develop movement andÂ language separately and then superimpose them on one another. Other times, I would read about P. T. Barnumâ€™s discussion and publicity of the different figures in his circus and I would use that to developÂ some of the choreography. There were moments where I sang selections of P.T. Barnumâ€™s autobiography, but then my gestures would align with the singing and other times where I would create a gap between the image of me singing and the actual song. I might flail my arms, while I was whispering. Or, the rhythm of my gestures would be staccato, while the singing was legato. In general, this is a kind of strategy I use because I am interested in picking apart a very familiar experience and then offsetting it slightly, so that you can experience elements of the familiar and the unfamiliar simultaneously. I guessÂ the strategy itself is mechanistic in that it is informed by digital processes. Itâ€™s kind of like watching a movie in which the soundtrack is slightly off. Though the body and language are related, I also think that they are different in many ways. Each has a different presence on stage and has different strategies for meaning making and unmaking. Dance can do things that language cannot do and vice versa. But, Iâ€™m interested in how the different things they can and cannot do bump up against one another to do something else. 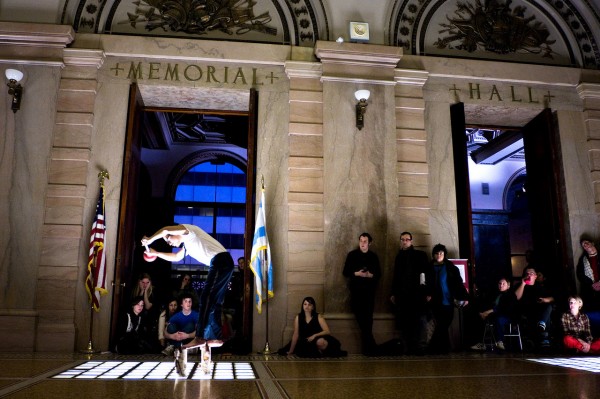 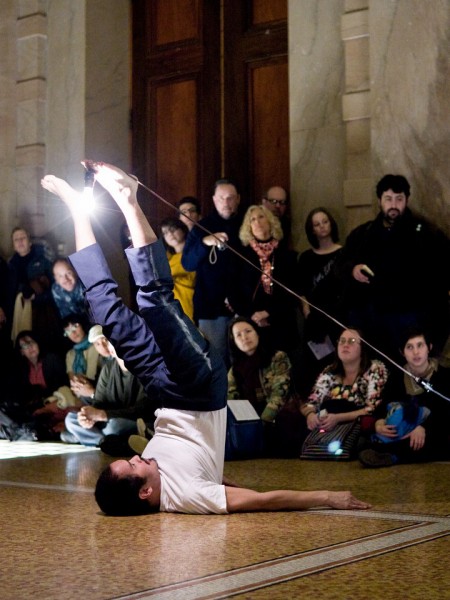 CP: Where do you imagine the body ends and begins? Does that conception change depending on whether or not you are performing?
JC: For me the body doesnâ€™t begin and end at the skin container, so to speak. Itâ€™s easier for me to think about bodies instead of the body. I got injured a few times this Fall, and Iâ€™ve been curious about theseÂ different bodies that these different injuries have produced. After the injuries, my body has never been the same, but that showed me even more that my body was never the same in the first place. I am interested in the way spit, feces, food, and lovers are all extensions of our bodies. The anthropologist Nadia Serematakis discusses this way that our bodies can extend beyond what we normally think of as the boundaries of ourselves. In much of the choreography and writing that I do, I often look to pulling from outside sources, music Iâ€™m listening to, books Iâ€™m reading, movement I observe in a museumâ€”which I then alter in different ways. In Faces, Varieties, Postures, I performed several images from a Civil War Era etiquette book depicting men with their guns. I am not interested in where bodies end, but I am interested in how bodies begin and begin again. This concept doesnâ€™t change much whether I am performing or not. I think there are multiple bodies, the performing body, the social body, the injured body, but I am invested in all of them when I think about a body because the perceived differences between them highlight their differences and commonalities. I donâ€™t really believe that there is a neutral or blank body, whatever that would look like, and so I donâ€™t believe in a body that ends. It just becomes something else.

CP:Â  What is the function of breath in your work?

JC: When I did On a Corner, this was a central concern. In the piece, I recite the alleged origins of the Corner Bakery, which are printed on their cup sleeves. I inhaled instead of exhaling the words, andÂ allowed myself one breath between each line of text. I lost my breath and started going into spasms because of the taskâ€™s effect on my body. There I wanted to deal directly with the breath in relation toÂ language. However, the piece became something else, as it was also a way of connecting with the audience. The sound and image of someone breathing can move someone else to breathe in a similar way, as in a Yoga class. The way we move our breath can lead us to move and breathe in different ways. This in turn can lead someone to feel different emotions that are associated with that pattern of breathing. In performance and in generating material, I play with different ways of using and misusing breath. I am drawn to different language and different vocalized sounds, like weeping or laughing in Troupe, that are somehow as basic as a breath. These sounds, among other effects, mirror a response to the audience and that somehow can construct empathy, coercion, and manipulation. At the end of Troupe, I lie on my side and laugh for several minutes with my mouth in a held smile. I have dealt with laughter in other pieces as well, but this time, I was curious about the laugh track in sitcoms. I slightly altered the usual â€œhehâ€ sound to a laughed â€œiâ€ sound. The repetition of it produced some laughter from audiences, while I struggled to hold myself up and push myself across the floor. Laughter was just one of many responses, but I welcome those other responses. I often use the voice and movement in ways that can create fields of responses that can conflict. I am fascinated when an audience member has an ambivalent response, and when audience members have very different responses from one another.Â An audience member might be laughing at something that is suffocating me, while other audience members might be well aware that Iâ€™m suffocating. I donâ€™t see breath as having a singular function in myÂ work, but I do think that it often establishes a sort of visceral connection with the audience that may help tap into some of the other issues Iâ€™m dealing with in a piece. 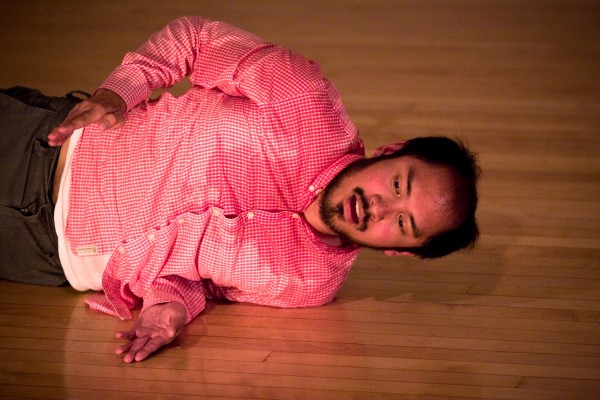 CP: Where does sense come from?
JC: I think sense is neither objective, nor completely subjective. It is akin to consensus, and is similarly grounded in particular disciplines, social groups, and individuals. Â When making a performance, I think a lot about the contract that a performer establishes with the audience. I try to establish different buoys forÂ an audience, so that we can move further into â€œnonsenseâ€ and perhaps create some consensus out of that. Ultimately, I wonder how something that is called â€œnonsenseâ€ or that is outside of Â â€œcommonâ€ sense orÂ that is socially awkward somehow, speaks both to the consensus of a particular group of people and to the dissensus of others.