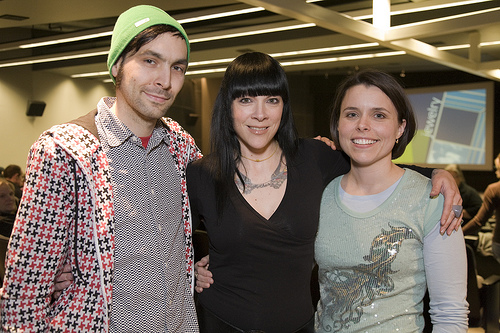 This week: The coolest person we know! The lovely, the talented, the amazing Jennifer Reeder!

This weeks show was edited in the bathroom of a Hampton Inn between bouts of my 2 year old vomitting. The fun and off-the-rails conversation managed to keep my spirits light, and as you navigate the holiday fracas I’m sure it will aid you too.

Over the last decade and since her inclusion in the 2000 Whitney Biennial (with her iconic Nevermind, where the artist herself lip-syncs to â€œSmells like Teen Spiritâ€ by the 90s grunge-rock band Nirvana), Jennifer Reeder has steadily built a body of work that explores gender, identity and relationships in an often strange, complicated world. Her works have also gotten progressively longer and more narrative and have been screened in countless film festivals around the world.

Jennifer lives and works in Chicago, Illinois. She received her M.F.A. from the Art Institute of Chicago in 1996. She is currently the chair of the graduate studies department for the School of Art and Design at the University of Illinois Chicago, where she is also an associate professor of moving image. She was nominated for the 2000, 2001, 2002 and 2008 Rockefeller Grants for Film/Video/New Media as well as a 2001 Louis Comfort Tiffany Award for visual art and a 2004 Richard H. Dreihaus Foundation Award.

She is currently an Efroymson Family Fund Fellow. Other events include a solo screening at the Moderna Museet in Stockholm Sweden and group screenings and exhibitions at: The New York Video Festival, at The Lincoln Center; Double Heart/Hear the Art, at the Kunsthalle Exnergasse, Vienna, Austria; The 2000 Biennial at the Whitney Museum of American Art; In the Middle of Nowhere at the Yerba Buena Center for the Arts in San Francisco; Generation Z at P.S.1, New York; The 48th International Venice Biennial, Venice, Italy. This is her first exhibition with the gallery. The new film we present here was partially funded by the Media Art Residency Program at the Wexner Center for the Arts and a fellowship from the Emfroyson Family Fund.