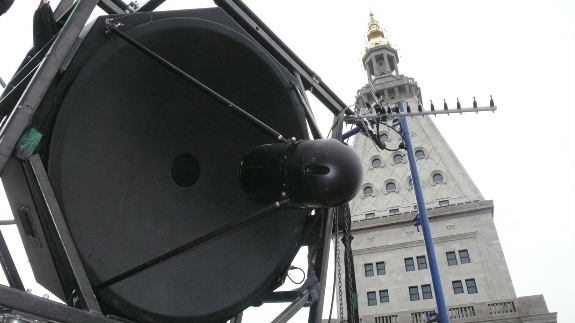 This week: Two for the price of one! We have two interviews, first one of Duncan’s heroes, Iain Baxter& and then sound and installation artist Bill Fontana.
Join us in NYC on the East River for our Kiron Robinson interview on March 17th!

Bill Fontana: b 1947 in Cleveland, Ohio; sound artist. He studied philosophy and music at the New School for Social Research in New York, with Phillip Corner and others. Following a prolonged stay in Australia, he was a guest artist in Germany and Japan. The composition of sound sculptures began in 1976; Fontana has since produced a large number of works in this genre. The compositions and live sound sculptures realised for the Studio Akustische Kunst of the german radio station WDR have been of central importance for Fontana’s artistic development; they include Â«Distant TrainsÂ», Metropolis Cologne, Â«Satellite Ear Bridge Cologne â€“ San FranciscoÂ», Â«Journey Through My Sound SculpturesÂ», Â«The Sound of an Unblown FluteÂ», Â«Soundbridge Cologne – KyotoÂ».

Critic David P. Silcox has written: â€œ[Iain] Baxterâ€™s work demonstrates the brilliant but contradictory traits â€“ tradition and iconoclasm, access and mystery, humour and seriousness, the calculated and the serendipitous â€“ that change art and our ideas about seeing art (and indeed everything) at a fundamental level. He is Canadaâ€™s first conceptual artist and perhaps first anywhere.â€

Baxter was born in 1936 in Middlesborough, England and emigrated to Calgary, Canada with his family a year later. He was educated in the United States, where he received his BS and MA from the University of Idaho, in biology and zoology. Through studying the natural sciences and doing illustrations of animals, Baxter became interested in art. It was with no background in art that he entered the Masters of Fine Arts program at Washington State, and upon receiving his degree was awarded a Japanese government foreign scholarship in 1961 to study Zen and art in Japan. He continues to see a close relationship between art and science. â€œI went from illustration to art,â€ he has said, â€œand getting into the field of art opened a door to a whole area of personal research in the phenomena of seeing and being. I think pure science is on that same level.â€ Whether in science or art, his focus was long on the relationship of the organism or being to its environment.

It was with this mentality that in 1965 Baxter developed a pseudonym and fictional business called N. E. Thing Co. Ltd. It was a revolution of the concept of â€˜artist,â€™ a displacement of the artist out of its natural environment of â€œart worldâ€ and into the environment of business. The company was also an umbrella concept through which he could develop many different â€˜departmentsâ€™ of artistic thought. N. E. Thing produced a range of printed matter including calendars, books and information sheets that assembled images of works by other artists.

Baxterâ€™s work as a solo artist and as founder of N.E. Thing Co. has been exhibited widely throughout North America and Europe, including the National Gallery of Canada, Ottawa; Ontario, the Canadian Cultural Centre, Paris, France; the Museum of New Art, Detroit, Michigan, and the Guggenheim Museum, New York, NY. It is in numerous public and private collections including the National Gallery of Canada, the Museum of Modern Art in New York, the F.R.A.C. Art Museum in Bretagne, France, and the Gemeentemusem in The Hague, Holland. Baxter was the Canadian representative in Taejon, Korea for Expo â€˜93. He been granted membership in the Royal Canadian Academy and a nomination as an Officer of the Order of Canada. In 2004, he won the Governor Generalâ€™s Award in Visual and Media Arts and received an Honorary Doctorate from the University of British Columbia. He lives and works in Windsor, Canada, where he is represented by the Corkin Shopland Gallery and since 1988 has taught at the University of Windsor in the School of Visual Arts.