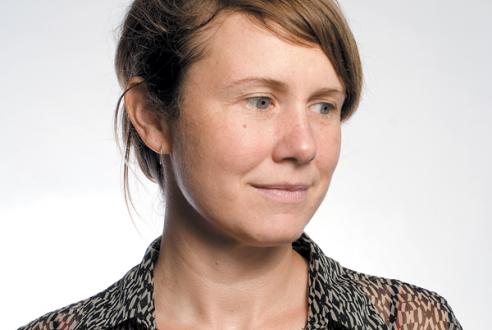 This week: Philip von Zweck sits down to talk with artist and educator Kelly Kaczynski.

GO CHECK OUT HER SHOW AT THE COLLEGE OF DUPAGE-GAHLBERG GALLERY! I heart the Gahlberg Gallery.

Study for Convergence Performance (ice) is the second work in a series that seeks to conflate the artist’s studio as a performative site of production, the space of display as the reception of image, and landscape as site for epic but apathetic metaphor. It uses the devices of the theatrical stage and the green screen; both of which operate as a “non-space” that allows the conflation of multiple contexts or sites. She uses imagery from landscapes that shift in time, such as bodies of water including glacier fields. The title of the piece refers to Robert Smithson’s idea of “the range of convergence between site and non-site” whereas the land from the originating site is placed in the container of the non-site. In Study for Convergence Performance, the site of origin and the sign of site converge as they transpose in a collapse of time.

Kelly Kaczynski is an assistant professor and assistant chair in the Department of Art Theory & Practice at the Weinberg College of Arts and Sciences, Northwestern University.Â  Kelly is a sculptor and installation artist. Her work, while existing in a temporal-spatial platform, is deeply materials based. She received an MFA from Bard College in 2003 and a BA from The Evergreen State College in 1995. She has exhibited with threewalls, Chicago; Hyde Park Art Center, Chicago; University of Buffalo Art Gallery, NY; Rowland Contemporary, Chicago; Triple Candie, NY; the Islip Art Museum, NY; Cristinerose/Josee Bienvenu Gallery, NY; DeCordova Museum, MA; 123 Watts Gallery, NY; and the Boston Center for the Arts, MA. Kaczynski’s work was included in the Boston Drawing Project at Bernard Toale Gallery, Boston. Public installations include projects with the Main Line Art Center, Haverford, Pennsylvania; the Interfaith Center of New York; the Institute for Contemporary Art, Boston and the Boston National Historic Parks; and the Boston Public Library. Kaczynski has taught at the School of the Museum of Fine Arts, Boston, the University of Pennsylvania, the University of Illinois at Chicago, and University of Chicago.