Bad at Sports first came on my reader radar for the interviews. Or, more precisely, the conversations. Beyond the accessibility of the medium, podcasting’s greatest contribution to broadcasting is the reintroduction of elastic time. Without the constraints of advertising and station breaks and schedules and all that, a program can last as long as it needs to. At least that’s the idea. I’ve found the long, wide-ranging interviews heard on this podcast and in others to be enormously instructive in thinking about the interview, in how conversational it can be and in what types of questions or prompts are most productive in elucidating the practices and personalities of those involved.

My feeling at this point is that a great deal of my output here at Bad at Sports will be interviews with artists working with moving images and in time-based media. In thinking through how I want these to function in the coming year, I’ve assembled a few smart, funny, strange or otherwise interesting interviews I’ve seen or heard in the last little while that have opened up the form to me a bit.

Felix Bernstein, a precocious 17 at the time of the interview, spoke with the late George Kuchar in 2010. I’ve experienced a lot of interviews with George and he’s always funny and sharp and excellently dodges whatever questions might seek to polish the stained, patinated scum skin of his cinematic cesspool. I am typically simultaneously in love with his responses and estranged by how they’re evoked. His best interviews were always those he performed on and by himself in his diary and weather films. Felix, though seems a nice foil for his quasi-serious, arch antics of a reclining George. This kid does well and it’s a nice glimpse into this period of his life.

Screening Room was a Boston television program that ran through much of the 1970s. Its host, Robert Gardner, is a filmmaker, visual anthropologist and academic who served as Director of Harvard’s Film Study Center for 40 years. The show featured long-form interviews with critical filmmakers of the period and is still a wonderful resource for learning about these makers and getting to know the texture of their personalities. Here is a short portion from his interview with Bruce Baillie. Or, at least, it’s something like that. The film shown is also quite extraordinary.

I think Charles Bernstein ( Felix’s father) is simply terrific. I’ve long admired his poetry and his critical work in poetics is astounding both for its breadth and its depth. He’s a great critic in part because of how well he listens. He’s also very generous and enormously funny. As an interviewer, here are three examples of what he does well. First, from a series of commercials in the late-90s in which Jon Lovitz played the author of the Yellow Pages. I vaguely remembered these from when they initially aired but have gone back and enjoyed them tremendously. In this long cut, Bernstein’s mental agility and openness to the expansive nature of poetics enables the joke to take on a much grander scale. If only Lovitz could keep up.

Here, Bernstein interviews pioneering underground filmmaker Ken Jacobs on his excellent Close Listening radio show. My favorite moment is at around 25:40, when the weight of Jacobs’ Marxian humanism and empath(et)ic anxiety is revealed.

Finally, here is Bernstein in the video-maker role, performing seasick camera moves and asking the amazing Caroline Bergvall language questions. A button film, but a wormhole into longer discussions.

This is a weird one. Filmmaker and curator Tyrone Davies is on the news in Missouri, chatting up his traveling film festival and then…

This video has been seen almost two million times. Davies was able to parlay his infamy into a spot on the tosh.0 show on Comedy Central. Beyond all this, of course, Davies is a real artist and one who uses the medium of television in interesting and inventive ways. The way internet video and video commingle, antagonize and sometimes exist as one is the subject for a whole other post, but this is one in a long queue ripe for examination. Or at least “Like”ing.

Finally, here’s an interview of sorts with the great filmmaker, ethnomusicologist and lifer Harry Smith. This is from late in Smith’s life, but his ebullience, defiance and wit are still ferocious.

For whatever it’s worth, I cut this post in more than half, so let’s just call this Part One. 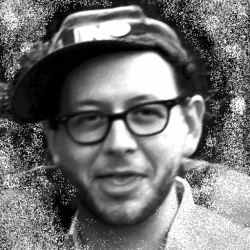