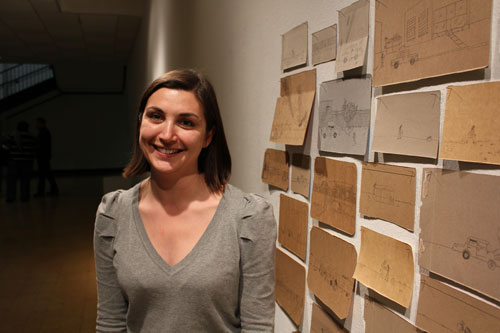 This week: We talk to cartoonist, artist, UFO afficianado Esther Pearl Watson! Recorded at Ox-Bow this summer and brought to you by magic.

Esther Pearl Watson grew up in the Dallas/Fort Worth area. Her family moved often since her father’s hobby of building huge flying saucers out of scrap metal and car engines didn’t always sit well with the neighbors.

Esther’s pieces are often overtly narrative, clear but mysterious, scenes of houses or figures, ornamented with snippets of prose telling just enough to get the viewer’s own imagination engaged and wanting to know more. Some are about family and some about places, but all have a rich interior life.

Her works without words are just as suggestive as a story, also exerting a deep emotional pull. Her work has been exhibited nationally and collected by Matt Groening, Cindy Sherman, David Byrne, Megan Mullally and Morgan Spurlock.

Check out the Ladydrawer blog here!