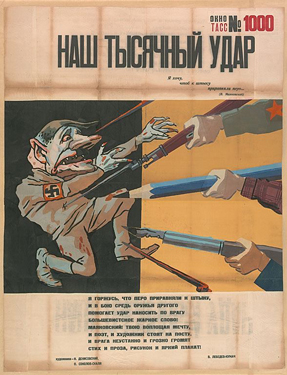 This Week: Has it really been 6 years? Really?

Wow. Duncan and Richard have a rambling bout of personal abuse as the intro and then get on to the good stuff.

Richard talks to Peter Zegers and Jill Bugajski about their work on the stellar new show at the Art Institute of Chicago Windows on the War, Soviet TASS Posters at Home and Abroad, 1941-1945, and on the accompanying catalog.

Overview: During World War II, the Soviet Union’s news agency, TASS, enlisted hundreds of artists and writers to bolster support for the nation’s war effort. Working from the TASS studio in Moscow, these artists and writers produced hundreds of storefront window posters, one for nearly every day of the war. Windows on the War: Soviet TASS Posters at Home and Abroad, 1941-1945 is a monumental exhibition centered on these posters, which have not been seen in the United States since the Second World War.

Impressively large, between five and ten feet tall and striking in the vibrancy and texture of the stencil medium, these posters were sent abroad, including to the Art Institute, to serve as international cultural “ambassadors” and to rally allied and neutral nations to the endeavors of the Soviet Union, a partner of the United States and Great Britain in the fight against Nazi Germany. In Windows on the War, the posters will be presented both as unique historical objects and as works of art that demonstrate how the preeminent artists of the day used unconventional technical and aesthetic means to contribute to the fight against the Nazis, marking a major chapter in the history of design and propaganda. While the exhibition’s focus is primarily on the posters, viewers will also find their rich historical and cultural context revealed through photographs and documentary material illuminating the visual culture of US-USSR relations before and during the war.

Windows on the War is not only a fascinating glimpse into one of the most significant government-sponsored cultural efforts of the 20th century but also a major scholarly undertaking that brings these posters into the public eye for the first time in six decades. Catalogue: The exhibition is accompanied by a 400-page catalogue featuring essays by Peter Zegers, Douglas Druick, Jill Bugajski, Konstantin Akinsha, Adam Jolles, and Robert Bird as well as by an extensive online initiative that will bring hundreds of these unique works to the public for the first time since the war.