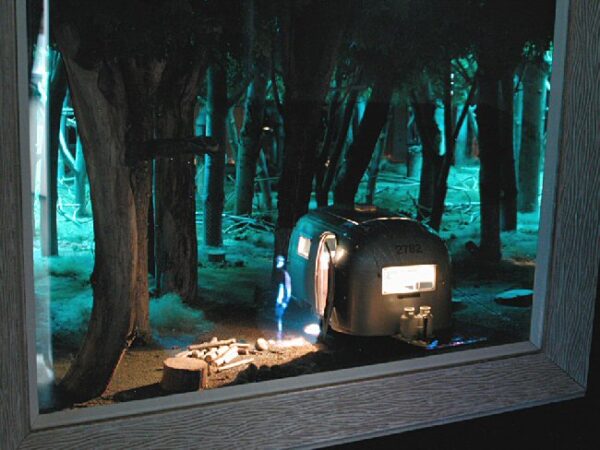 This week: We talk to artist David Hoffos. Next, we talk with Joe Lanasa about the Fulton Street Collective.

Scenes from the House Dream opens at the Illingworth Kerr Gallery, Alberta College of Art and Design, Calgary, Oct. 27
and runs until Dec. 31, I think.

In 1994, David Hoffos received a BFA with great distinction from the University of Lethbridge. Since 1992 Hoffos has maintained an active exhibition schedule â€“ with over 30 solo exhibitions, including Catastrophe, 1998 (Illingworth Kerr Gallery, Calgary; FundaciÃ³ Joan MirÃ³, Barcelona; Or Gallery, Vancouver; and Blackwood Gallery, Mississauga) and Another City, 1999-2002 (Southern Alberta Art Gallery, Lethbridge; TrÃ©panier Baer, Calgary; Joao GraÃ§a, Lisbon; The Art Gallery of Ontario, Toronto; and MuseÃ© des Beaux-Arts, MontrÃ©al). In 2003 Hoffos (with TrÃ©panier Baer) launched the first phase of Scenes from the House Dream, a five-year series of linked installations. The entire series is set to begin its cross-Canada tour in the fall of â€™08. His single-channel work has been shown in festivals in over twenty countries, and he recently represented Canada at the 48th Oberhausen Short Film Festival, Germany. A survey of his installation work debuted at the Edmonton Art Gallery in December, 2003. His first theatre piece â€“ Hoffos/Clarke Conspiracy (with Denise Clarke/One Yellow Rabbit) â€“ debuted at Calgaryâ€™s High Performance Rodeo in 2006. He has just completed scenic and visual effects design for the Decidedly Jazz Danceworks production wowandflutter. Hoffos has been invited to several residencies, including three at the Banff Centre. The artist has received awards including 2nd place in the inaugural Sobey Art Award, December 2002; the 2004 York Wilson Endowment Award; Images Grand Prize, 2007; and a Long-Term Visual Arts Project Grant, 2008. David Hoffos lives and works in Lethbridge, Alberta. He is represented by TrÃ©panier Baer, Calgary.
About Fulton Street Collective:Â In the early 1990s, Anna Fermin and I were struggling singer-songwriters on the northside of Chicago, rehearsing in a corner room of a print-shop business owned by Don and Janeen (who also managedÂ our budding musical careers). Â Â We were the epitome of poor, downtrodden, and struggling artists.Â Â One day Don and Janeen decided they wanted to leave the stress of Chicago, and relocated to the Pacific Northwest coast of Washington state. They gave their business to a â€œcollectiveâ€ of printers.

The printers business didnâ€™t do very well and one day they informed Anna and I that we had to leave the veryÂ next month.Â By this time Anna was developing a popular fan base in Chicago with her unstoppableÂ talent, in alt-country bands (AnnaBoy and Trigger Gospel), and I was turning my angst-ridden, heartÂ and soul-wrenching songs into rock anthems and road-house dance parties (Fulton St. Saints, JLB).

We didnâ€™t want to jinx anything by leaving our sacred practice venue, so we put ourÂ heads together to figure out how to keep the space. We negotiated with the building ownersÂ (Industrial Council of Nearwest Chicago), which provides small businesses incubator environmentsÂ in the neighborhood.

Anna suggested that we could create an environment geared towards artistsÂ and other creative people by purchasing the 2nd and 3rd floors. So we did. Â We worked, mostly byÂ ourselves, to completely gut the 2nd floor of the building (we whitewashed the walls with a sprayÂ painter that left us spitting out white paint still to this day). Â We then put an ad in the newspaper forÂ artists, and before long, the 2nd floor filled up, and so we expanded to the 3rd floor, which is nowÂ very active as well.