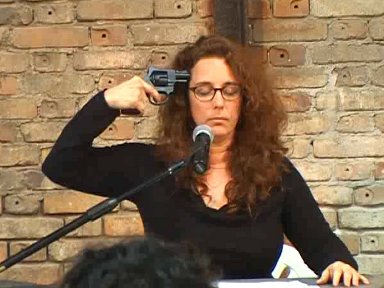 Tania Bruguera (born 1968, Havana, Cuba) is a Cuban installation and performance artist, trained at the Instituto Superior de Arte in Havana and at the School of the Art Institute of Chicago. Bruguera’s work pivots around issues of power and control.

She lives and works between Chicago and Havana. She is the founder and director of Arte de Conducta (behavior art), the first performance studies program in Latin America, which is hosted by Instituto Superior de Arte in Havana. She is also an Assistant Professor at the Department of Visual Arts of The University of Chicago, United States and is an invited professor at the University IUAV in Venice, Italy.

A March 2009 performance by Tania Bruguera, at an arts centre in Havana, has been involved in controversy. During the performance Tania Bruguera put up a microphone and told people in attendance they could say whatever they wanted for one minute. Various of the attendees use the opportunity to ask for â€œfreedomâ€ and â€œdemocracyâ€. One of these was the awarded blogger Yoani Sanchez. The Cuban government denounced this in a statement saying that it considered â€œthis to be an anti-cultural event of shameful opportunism that offends Cuban artists and foreigners who came to offer their work and solidarity.”

Another controversial performance in September 2009 in the National University of Colombia (Bogota branch), included consumption of cocaine provided by the artist to the attendants. According to University officials, the artist asked for permission to carry a weapon and use cocaine but permission was denied.