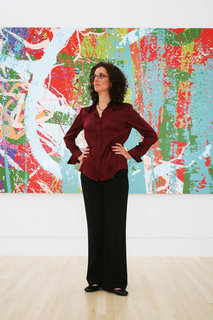 In this week’s episode Duncan talks to Lisa Freiman of the Indianapolis Museum of Art. This wide-ranging discussion looks at her work with the 2011 Venice Biennial/Jennifer Allora and Guillermo Calzadilla, what it takes to make a relevant sculpture park, and what is up with our neighbor in the blogosphere Art Babble. Hold onto your hats it’s bound to be a bumpy ride.

Lisa appears with the generous support of SAIC’s Visiting Artist Program and we thank them for their assistance. And special thanks go out to Andrea Green and Thea Liberty Nichols.

The following bio was “borrowed” remorselessly from the 54th international art exhibition known as the Venice Biennial. Maybe you’ve heard of it?

Lisa D. Freiman is senior curator and chair of the Department of Contemporary Art at the Indianapolis Museum of Art. In fall 2010, Freiman was appointed by the United States Department of State to be commissioner of the U.S. Pavilion in the 54th International Art Exhibition, La Biennale di Venezia. In 2011, she will present six newly commissioned, site-responsive works by Puerto Rico-based artists Allora & Calzadilla, the first collaborative to be presented in the U.S. Pavilion. Under Freimanâ€™s vision and direction, the IMA opened 100 Acres: The Virginia B. Fairbanks Art & Nature Park to international critical acclaim in June 2010. 100 Acres offers a newÂ  resilient model for sculpture parks in the 21st century, emphasizing experimentation, place-making, and public engagement with a constantly changing constellation of commissioned artworks. Inaugural installations included works by eight artists and artist collaboratives from around the world including Atelier Van Lieshout, Kendall Buster, Jeppe Hein, Alfredo Jaar, Los Carpinteros, Tea MÃ¤kipÃ¤Ã¤, Type A, and Andrea Zittel.

During her eight-year tenure at the IMA, Freiman has transformed the experience of contemporary art in Indianapolis. She has created a dynamic and widelyÂ  renowned contemporary art program that has become an influential model for encyclopedic museums as they engage the art of our time. Actively seeking out the works of emerging and established international artists, Freiman continues to provide a platform to support artistsâ€™ work through major traveling exhibitions, commissions, acquisitions, and publications. She has realized major commissions by artists including Robert Irwin, KayÂ  Rosen, Tony Feher, Orly Genger, Julianne Swartz, and Ghada Amer, and curated numerous exhibitions of works by international contemporary artists includingÂ  Amy Cutler, Ingrid Calame, Maria Magdalena Campos-Pons, Ernesto Neto, and Tara Donovan. Freiman has published extensively on contemporary art, including books on Amy Cutler (Amy Cutler, Hatje Cantz, 2006), and MarÃ­a Magdalena Campos-Pons (MarÃ­a Magdalena Campos-Pons: Everything Is Separated by Water, Yale University Press, 2007), and Type A (Type A, Hatje Cantz, 2010).

Prior to joining IMA, Freiman worked as assistant professor of art history, theory, and criticism at the University of Georgia, Athens and served in the curatorial department of the Institute of Contemporary Art, Boston. She earned her doctorate and masterâ€™s degrees in modern and contemporary art history from Emory University and has a bachelorâ€™s degree in art history from Oberlin College. Freiman is currently editing the first collection of Claes Oldenburgâ€™s writings from the Sixties, which will be published by Yale University Press in London in 2013. She is also adapting her dissertation, â€œ(Mind)ing The Store: Claes Oldenburgâ€™s Psychoaesthetics,â€ into the first scholarly monograph on Claes Oldenburg entitled Claes Oldenburg and the Sixties.