“But saying no to the internet is not a simple exercise of willpower. The encroachment of the internet into our everyday lives often seems irresistible not merely because we like it â€œtoo muchâ€ but because we palpably risk social exclusion if we canâ€™t keep up, if we lack online presence. It can make us seem vaguely suspicious, as though we have something to hide. Thus the vaunted network effects that the Web harnesses begin to come at the expense of our autonomy: We have to maintain a Facebook page. We have to shop through Amazon.com. We have to Google ourselves to check up on our reputation. We must get a smart phone. We must yearn for unlimited data plans.” — Rob Horning, “Children are our future: Resistance, Addiction and the Digital Natives.” The New Inquiry.

Rob Horning’s essay for The New Inquiry is one of the best (and scariest, of an already scary genre) I’ve read lately on social media identity. Although I’m not part of the generation of “digital natives” that Horning is writing about, I recognize that acute sense of pressure that Horning describes, one that says if we’re not participating in social media, we’re invisible, and thus irrelevant. I think for writers that may be doubly true, since so much of social media involves the written word, albeit brief snippets and truncated chunks of it.

Social media is above all a performative act, and it can be fun to think of oneself (or those aspects of ourselves we want to project publicly) in terms of characters that we construct and subsequently play-act. That character is you, but of course it’s not exactly you. It’s the You that you want to project to others. For example, the written voice, the “I”Â  that I project on this blog, or as a (god help me) Twitter user, or on my Tumblr (which I am kind of obsessed with and into which I have been pouring way too much energy lately) is a version of me that I project for you. It’s a version of me that I feel fairly comfortable with, but of course it isn’t really me. It’s a tougher and bitchier and snarkier and generally more self-confident version of me.

Sometimes I think my husband has a crush on Internet Me. Poor guy. He has to come home to harried, neurotic, still in her pajamas and bitchy-in-a-not-funny-or-even particularly smart-way Me.

Such are the sweet lies that social media tells.

When we do try to swim in the stream of social media–when we carefully choose our portrait pictures and avatars and monikers and privacy settings, when we decide who we want to follow and who we will allow to follow us–we’re constructing a falsely unified picture of ourselves. In this, social media simply re-iterates the fragmented identities and fictions of a cohesive Self that all those post-structuralists were rambling on about decades ago. As Horning observes: “We think we are presenting a coherent picture of who we are online, only to recognize suddenly that we are not so sure of that identity ourselves.”

I’ve been thinking about how online portraiture is particularly reflective of this phenomenon. As I was reading Horning’s words, for example, an image suddenly popped into my mind: that of a close friend, her face blurred almost beyond recognition, her upper body momentarily frozen in a pose that suggested she was either dancing, looking at herself in a mirror, or in the midst of a brief, catlike stretch. The image started out as a photograph, but it became a portrait, made by an artist named Ryan Haugsjaa.

My friend was startled to learn that a stranger had, unbeknownst to her, chosen her photo randomly out of the hundreds of thousands of Facebook users out there and painted a portrait based on it. She told me she thought it was cool, but also sort of creepy.Â  When she went ahead and posted the portrait on her own Facebook page, I was fascinated by it, largely because I thought Haugsjaa had somehow chosen just the right photograph to represent her — an image that, to me anyway, contained the essence or punctum, as Barthes put it, of my beautiful, free-spirited friend. But of course, Haugsjaa had no way of knowing that.Â  Do strangers see what I see when looking at Haugsjaa’s portrait of her? Probably not. On Haugsjaa’s Facebook page, my friend is just one in a series of named yet ultimately anonymous subjects, an illustration of a concept that Haugsjaa has been exploring for about a year now: “the proliferation of images on the internet, internet privacy and how it will affect our lives in the future,”ï»¿ as Haugsjaa explains in his artist’s statement. 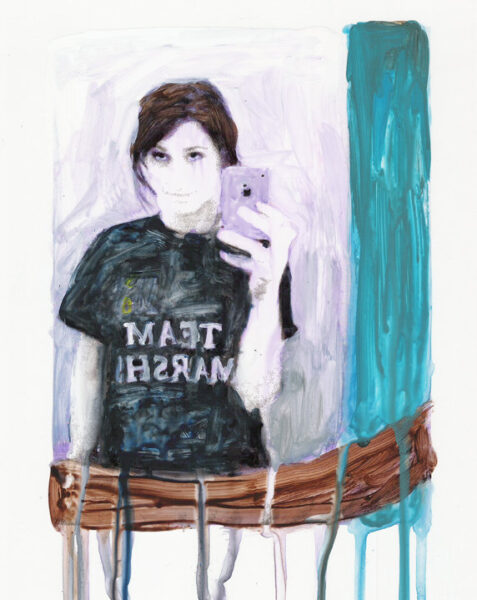 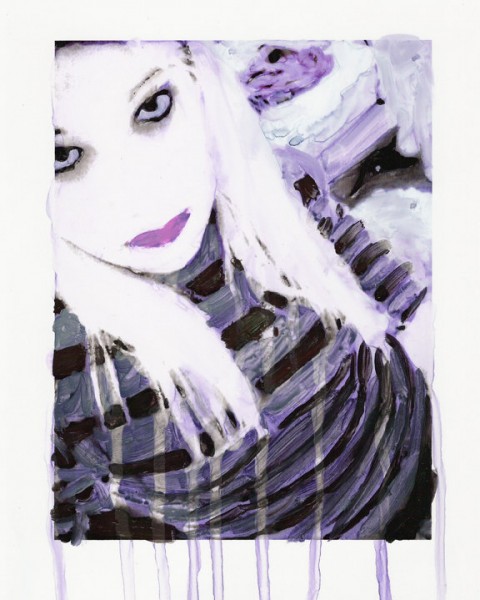 Haugsjaa isn’t the only artist to have drawn from Facebook’s enormous pool of images as subject matter for art. Paul Campbell and Matt Held of “I’ll have my Facebook portrait painted by Matt Held” fame have also made portrait paintings based on Facebook profile pictures. 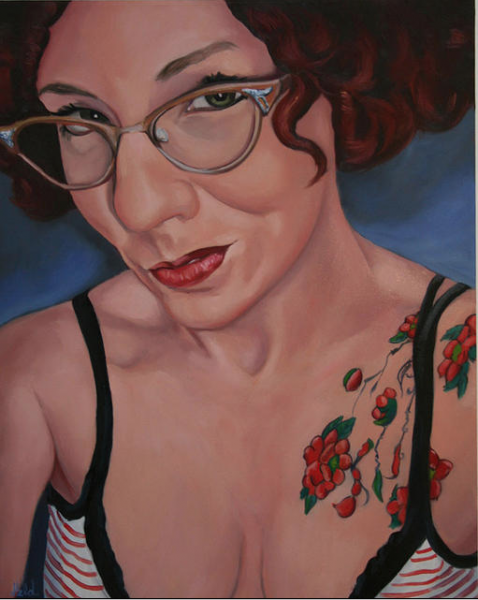 But whereas both Held’s and Campbell’s Facebook paintings tend to radiate an air of sunny whimsicality, Haugsjaa’s are more off-putting; they are purposefully strange and estranging, too. I find Haugsjaa’s portraits to be especially compelling when viewed in thumbnail size and stacked in one longÂ  grid, as they are on the artist’s album page. 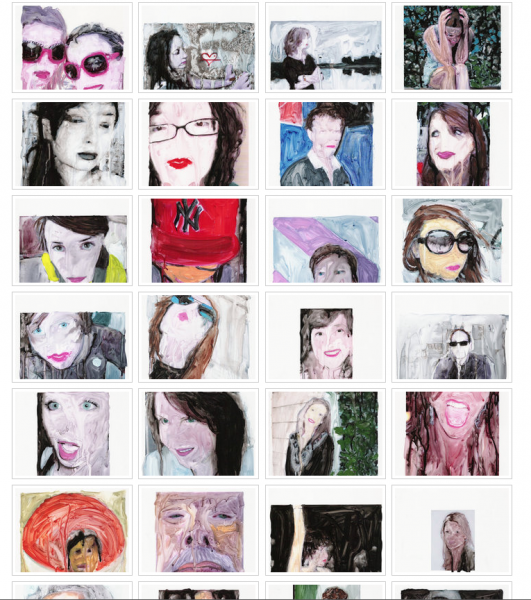 The fact that Haugsjaa’sÂ  use of these images is unauthorized (and in a few rare cases, unwanted) adds a sense of illicit voyeurism to the process of looking at them. Arguably, there’s something slightly aggressive both in the way the artist searches for and selects his subjects, as well as in the way he alters their carefully constructed photographic personas into images that shimmer somewhere between the monstrous and the familiar.

This is amplified by the fact that Haugsjaa’s paintings aren’t paintings in the traditional sense of the term–they’re more a kind of mash-up of digital photography and painting. As Haugsjaa explained to me in an email, he’s actually “painting into” the existing photographic images, rather than representing that image via painted renderings of his subjects. He prints the Facebook image using a standard inkjet printer and photo paper and, while the printout ink is still wet, he “modifies” it using acrylic and oil paint, which mixes with the ink in a single layer. The resulting images appear to be dripping off the carefully designated, postage-stamp confines of the square, as if the subject’s carefully constructed identity were literally melting–or slipping away from–our gaze.

Artist Dominic Paul Moore, who lives in Chicago and co-directs ebersmoore, has also made a series of graphite drawings based on social media portraits. His “my(death)space” series is based on the My Spaces pages of young people who have died, which Moore found through the website MyDeathSpace.com (and which is a kind of a conceptual art project in and of itself. Spend some time clicking around in there and tell me it doesn’t start to freak your shit out after awhile). 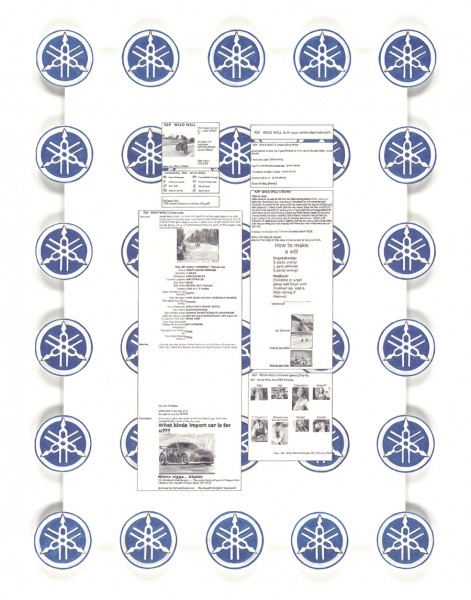 Dominic Paul Moore. Wild Will, 2008. Gouache and graphite on yupo. 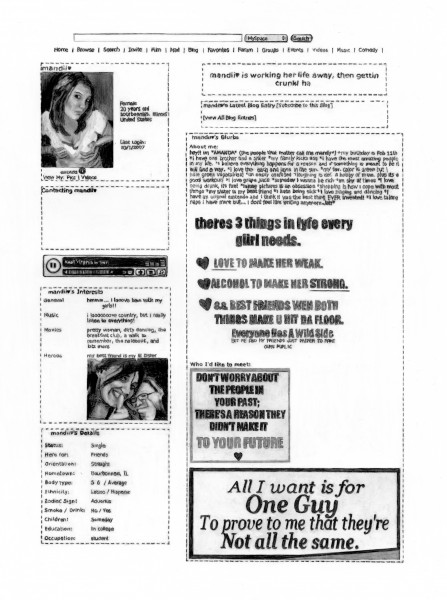 Moore’s carefully rendered graphite drawings are like tombstone rubbings of virtual grave sites — both the web page and Moore’s drawing of it are a type of repository for an identity that will henceforth cease to be updated. Doesn’t it seem like a million years ago when only movie stars got to have their “selves” live on forever through celluloid? Nowadays, we all can, through the magic of our preferred social media network. In fact, we can’t get rid of our pesky Internet doppelgÃ¤ngers even if we want to. Even after we’re dead.

To whatever extent our online selves reflect our offline selves, Haugsjaa and Moore’s portraits make it harrowingly clear that our online profiles and virtual personas have, in a very real sense, escaped us. They/We are up for grabs, ready to be data-mined, added, followed, memed, and retweeted. The opportunity to have one’s portrait painted was once available only to a select few: typically, the very rich or the very poor. Social recognition used to be a privilege. So why does it now seem more like a punishment?