A few weeks ago I had the great pleasure of interviewing Martha Wilson via email in conjunction with the Visiting Artist Program lecture she is giving at the School of the Art Institute tomorrow night. Wilson is a significant figure in the history of feminist art, but even more important has been her championing of the artist’s book and her historic work as co-founder and director of Franklin Furnace Archive, which launched in 1976 as a performance and exhibition space located in Wilson’s loft. Today, 30+ years later, the core mission of FranklinÂ  Furnace seems just as urgent as ever: “to present, preserve, interpret, proselytize and advocate on behalf of avant-garde art, especially forms that may be vulnerable due to institutional neglect, their ephemeral nature, or politically unpopular content.”Â  I asked Ms. Wilson some questions about several different areas of her practice, and am extremely grateful to her for taking the time to answer. You’ll be able to ask Martha Wilson questions of your own tomorrow, Tuesday November 9th, at 6pm at SAIC’s Columbus Auditorium, 280 South Columbus Drive. Directions and info here. 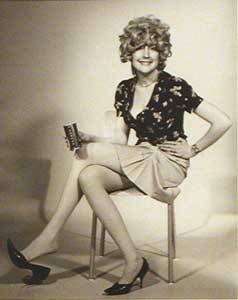 Martha Wilson, A Portfolio of Models (The Working Girl), 1974.

Claudine Ise: Much of your early conceptual/performative work dealt with identity and the exploration of what you’ve described as “personality sculpting.”Â  In the piece titled A Portfolio of Models, for example, you enacted “the models society holds out to me: Goddess, Housewife, Working Girl, Professional, Earth-Mother, Lesbian.” Being an artist was one of very few categories that encompassed all of these identities (or none of them) – a way to avoid getting stuck as either one or the other. I’m curious if now, more than thirty-five years after you did that piece, you think that that range of popular models for women has expanded?

Martha Wilson: Certainly the range of popular models for women has expanded!Â  I guess what annoys me is that there remains a double standard for the assertive behavior necessary to get ahead:Â  In men, it is seen as appropriate and desirable, while in women it is seen as aggressive and bitchy. 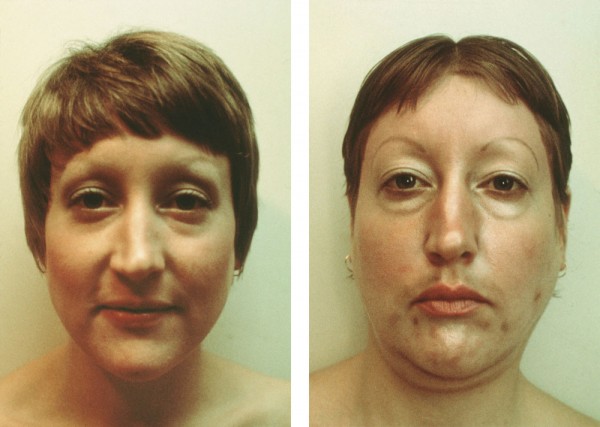 CI: You made another piece in 1973 called “Selfportrait,” where the audience was integral to the work. They were asked to write down who they thought you were on pieces of paper and give them to you. Among other things, you were exploring the notion of the self as something malleable, and which also perhaps could only be known as a reflection of other people’s projections. I find the idea of ‘personality sculpting’ to be really suggestive in terms of how people present themselves on the Internet today. I don’t know how personally engaged you are with social media, but it does seem to be the case that nowadays people are constantly in the process of shaping their personas for public consumption – it’s a form of self-portraiture that we all engage in.

MW: After the Culture Wars of the 80s and 90s, I noticed that the concern of artists in the new millennium shifted from sexuality to concern for privacy in the online environment. Now there has been yet another shift, to the polar opposite:Â  Everyone posts private information on blogs, on YouTube, on Facebook, on Twitter.Â  The networked environment started to level the social playing field, and this trend will only continue as the Guggenheim solicits YouTube videos from regular folks and exhibits them in the museum environment.Â  A century later, the desire of the Italian Futurists to make art that appeals to the hoi polloi is being fulfilled by the hoi polloi itself.

CI: The collection of artist’s books that Franklin Furnace has amassed is amazing and historically unique. You were one of the first people to recognize the importance of artists’ books, and the necessity of documenting and historicizing them. I’m curious about what led you to become such a passionate advocate of the book/publication format given your own early work had been so rooted in performance?

MW: The connection between the text and performance for me was through the practice of Conceptual art in the early 1970s.Â  The artists invited to visit the Nova Scotia College of Art and Design–such as Vito Acconci, Carl Andre, Joseph Beuys, Dan Graham, Douglas Huebler, Joseph Kosuth, Peter Kubelka, Sol LeWitt, Dennis Oppenheim, Ian Wilson– blurred the distinctions between thought and action, words and deeds.Â  For example, here are Lawrence Weiner’s thoughts about the existence of a work of art:

1.Â Â  Â The artist may construct the work/
2.Â Â  Â The piece may be fabricated/
3.Â Â  Â The piece need not be built/ Each being equal and consistent with the intent of the artist the decision as to condition rests with the receiver upon the occasion of receivership

Here is one of the pieces in Weiner’s 1968 book, Statements:

One regular rectangular object placed across an international boundary allowed to rest then turned to and turned upon to intrude the portion of one country into the other.

Because the type of this text is set in the form of a brick, word and image intersect in the idea of the artist.Â  Are these not instructions for a performance?Â  In fact, when I founded Franklin Furnace in 1976, I invited artists to read to the public.Â  (The term “artists’ books” did not exist as yet to describe contemporary, and cheap, publishing by artists.)Â  Every single artist chose to manipulate the performative elements (light, sound, relationship to the audience, props, costume, time) as part and parcel of the work.Â  (The misnomer “performance art” had not as yet taken hold either.)Â  The word in vogue at the time was “piece,” which encompassed the thought, the action, the documentation-drawn or photographed or filmed or published or taped-whatever.

CI: You started Franklin Furnace out of your loft, in part to showcase your growing collection of artists’ books and also as a performance venue. Franklin Furnace grew and evolved after that to become an organization dedicated to presenting all kinds of nontraditional art forms (especially performance art and printed matter). Its impact has been immense, and yet the concept of Franklin Furnace as a “space” has undergone some radical changes over the years. Franklin Furnace is now “dematerialized,” although its work has gone on as before. Can you talk a bit about why it made sense for you to move away from Franklin Furnace as a physical venue and towards an internet-based space?

MW: In the wake of the Culture Wars, the Board and I had a series of discussions about how Franklin Furnace could provide artists with the same freedom of expression they enjoyed in the loft in the 70s.Â  We decided that the Internet- perhaps not forever, but for now–was that free zone where artists could experiment freely, so we “went virtual” during Franklin Furnace’s 20th anniversary season.Â  At first I thought that since we were leaving physical space, we would leave the body behind; but instead we discovered that artists exploited the body of the net in addition to their own bodies.

CI: Chicago has a strong history of alternative art exhibition spaces, including artist-run spaces located in apartments or other domestic environments. Given your own decades of experience with this type of space, what advice do you have for others involved in running their own nonprofit venues? I’m particularly interested in the question of sustainability– not just in financial terms, but emotional and spiritual and creative sustainability as well. Sometimes when you’re running things on a shoestring (or no-string) it can be really hard to find the wherewithall to keep on keeping on!

MW: Knowing what I know now, it amazes me that people continue to found organizations and collectives.Â  Don’t they understand that they will NEVER STOP WORKING?Â  Yet what I have also noticed is that the art space movement readily adapts to current conditions.Â  For example, during the 70s, not-for-profit organizations in Soho and TriBeCa served the New York art community, while in the 80s, small, for-profit galleries on the Lower East Side flourished. Nowadays, there are hybrid forms that mix non-profit and for-profit strategies, with collectives of artists teaching classes or making equipment available to members who pay hourly rates.Â  I guess my advice to prospective art space founders is to understand that there will never be a “formula” that will work year after year; change is the only constant!

MW: In March of 2008, I had my first solo exhibition in New York at Mitchell Algus Gallery, “Martha Wilson: Photo/Text Works, 1971-74.” My friend Robin said, “Now that you have had one show, you can ask your dealer for another one.”Â  I replied, “I showed work I did in the 1970s; I don’t have any new work.”Â  But as soon as these words were out of my mouth, I thought, “I could revisit my Deformation piece as a 60-year-old lady.”Â  So indeed, during the last year I have been creating new photo/text works as well as performing as Barbara Bush, mother of the ex-President; she is feeling “all washed up.” In August, 2010 Franklin Furnace was awarded full funding from the National Endowment for the Humanities and matching support from the Booth Ferris Foundation for a two-year project to digitize our second decade of event records and publish them online in the Franklin Furnace Database.Â  This effort will, we hope, embed the value of ephemeral art practice in art and cultural history.