Ever Love Someone & Have Them Change Into Something Completely Different? 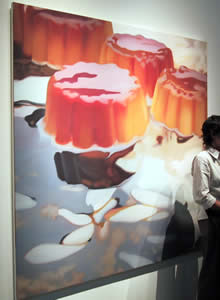 Will at his best for me, but when the Flan goes bad the relationship isn't far behind it seems. Or the proof is in the pudding.

Ever have an artist that you thought was fun, fresh, interesting and smart? Someone you told all your friends & family about and thought was someone you could be interested in for their entire career? Then they move to a different city,Â make some money, Â get a grant/scholarship,Â suddenÂ increase in press or some otherÂ seeminglyÂ innocuousÂ change at the time. Then almost overnight you don’t know that person and the work is not just bad on it’s own but seemingly worse for what it could have been?

I was told years ago for some Jasper Johns was kind of like that in many people’s eyes (being a big fan myself I could kind of see it even though I still enjoyed the later work) but for me that person has always been Will Cotton.

IÂ rememberÂ seeing video and photos from one of his first major shows back in 1999 and reading Mark Kostabi’s article in Shout and thinking “I agree with Kostabi on something? This is a new feeling!”. Will’sÂ Candyland Landscapes were unlike anything else being made at that time and were wonderful in their unabashedÂ gluttony, scale, execution & humor. During a time when I had as much angst and gritty somberness/passiveÂ aggressiveÂ irony as any man could take durring the 90’s I liked this idea of slick, fun and cranked up to 11 sensibility. Hoping like Chuck Close he would disasemble the formula over time into a more non-representationalÂ approachÂ and I would get art I would want to do and see without having to do all that blasted hard work lol.

Will Cotton then it seemed to me, spent the summer of 2002 in Giverny, France, where he worked under a residency grant from the Monet Foundation and realized that women have these things called breasts, and they are beautiful and now that he has money the women who own these breasts will sit for him; he never looked back. Almost overnight the landscapes were gone, the witty humor melted and it wasÂ cotton-candyÂ sky is the limit on cheesecake. Most recently you will see his latest work as the cover of Katy Perry’s new album Teenage Dream.

In some otherÂ dimensionÂ of reality Will Cotton would have gone to an Analytical CubismÂ conference, fallen in love with geometricÂ rhythm and not breasts but who am I kidding, “you gots to pay the bills somehow“. 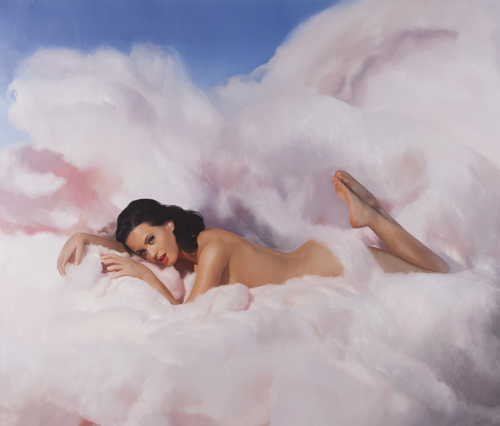