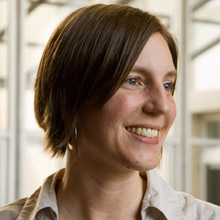 Camille Utterback is an internationally acclaimed artist whose interactive installations and reactive sculptures engage participants in a dynamic process of kinesthetic discovery and play. Utterbackâ€™s work explores the aesthetic and experiential possibilities of linking computational systems to human movement and gesture in layered and often humorous ways. Her work focuses attention on the continued relevance and richness of the body in our increasingly mediated world.

Her work has been exhibited at galleries, festivals, and museums internationally, including The New Museum of Contemporary Art, The American Museum of the Moving Image, New York; The NTT InterCommunication Center, Tokyo; The Seoul Metropolitan Museum of Art; The Netherlands Institute for Media Art; The Taipei Museum of Contemporary Art; The Center for Contemporary Art, Kiev, Ukraine; and the Ars Electronica Center, Austria. Utterbackâ€™s work is in private and public collections including Hewlett Packard, ItaÃº Cultural Institute in SÃ£o Paolo, Brazil, and La Caixa Foundation in Barcelona, Spain.

Awards and honors include a MacArthur Foundation Fellowship (2009), a Transmediale International Media Art Festival Award (2005), a Rockefeller Foundation New Media Fellowship (2002) and a commission from the Whitney Museum for the CODeDOC project on their ArtPort website (2002). Utterback holds a US patent for a video tracking system she developed while working as a research fellow at New York University (2004). Her work has been featured in Art in America (October, 2004), Wired Magazine (February 2004), The New York Times (2009, 2003, 2002, 2001), ARTnews (2001) and many other publications. It is also included in Thames & Hudsonâ€™s â€˜World of Art â€“ Digital Artâ€™ book (2003) by Christiane Paul.

Recent public commissions include works for The Sacramento Airport, The City of San Jose, California, The City of Fontana, California, and the City of St. Louis Park, Minnesota. Other commissions include projects for The American Museum of Natural History in New York, The Pittsburgh Childrenâ€™s Museum, The Manhattan Childrenâ€™s Museum, Herman Miller, Shiseido Cosmetics, and other private corporations.

Utterback holds a BA in Art from Williams College, and a Masters degree from the Interactive Telecommunications Program at New York Universityâ€™s Tisch School of the Arts. She lives and works in San Francisco.