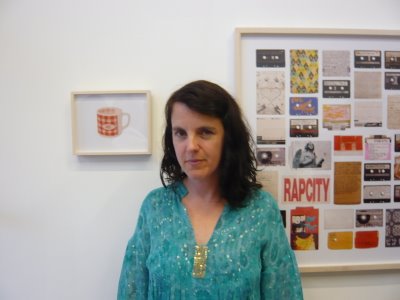 This week: The kick off of a series of programs recorded at Baer Ridgway Exhibitions in San Francisco during BAS’s mini residency as a guest of Chris Duncan during his “Eye Against I” exhibition. Brian and Duncan talk with Chris about the series, and then the main event Tammy Rae Carland! In addition to being a fascinating guest, Tammy is the only guest we’ve had who has a song written about them to utilize as their intro/outro clip (by the awesome band Bikini Kill no less).

Tammy Rae Carland was born in Portland Maine in 1965. She received her MFA from UC Irvine, her BA from The Evergreen State College in Olympia Washington and attended the Whitney Independent Study Program. She is an Associate Professor at the California College of the Arts where she also Chairs the Photography Program. She is represented by Silverman Gallery in San Francisco and primarily works with photography, experimental video and small run publications. Her work has been screened and exhibited in galleries and museums internationally including New York, Los Angeles, San Francisco, Berlin and Sydney. Her photographs have been published in numerous books includingÂ The Passionate Camera; Queer Bodies of DesireÂ andÂ Lesbian Art in America.

Her fanzine writing has been republished inÂ A Girlâ€™s Guide to Taking Over the World.Â She has also published photographs and received reviews of her work in numerous national media including:Â The New York Times,Â Big,Â The Los Angeles Times,Â Spin,Â Details,Â Out andÂ The Village Voice. In the 1990â€™s Carland independently produced a series of influential fanzines, includingÂ I (heart) Amy Carter. She has collaborated on the record art of some seminal underground music releases for the bands Bikini Kill, The Fakes and The Butchies. From 1997-2005 she co-ran Mr. Lady Records and Videos, an independent record label and video art distribution company that was dedicated to the production and distribution of queer and feminist culture. Tammy Rae Carland lives in Oakland California.

PS: A hearty “Fuck You” to Libsyn and their crappy software. This is the third time I’ve written this. Turn off or down the “time out” function on your site, jerks.