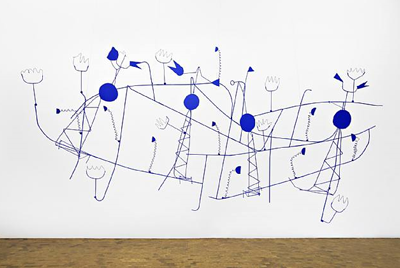 This week: We talk to Artist Nathan Carter who has a work in the current MCA Exhibition â€œAlexander Calder and Contemporary Art: Form, Balance, Joyâ€about his work, the youth perspective, and the secret trasmissions of numbers stations.

Here is a slightly outdated bio I lifted: Nathan Carterâ€™s wall reliefs, sculptures, collages, and hanging objects are inspired by myriad aspects of contemporary society: modes of transportation, mass communication devices, sports insignias, and architecture for mass gatherings like stadiums and parade grounds. At once gestural and reductive, his works amplify strategies first explored by modernist artists in the early 20th century. Deeply rooted in a fascination with how visual abstract codes represent a means of abbreviated, if not universal, communication, Carterâ€™s free-form compositions are simultaneously non-objective and referential.

Playful at first impression, Carterâ€™s art contains allusions to mundane yet foreboding engagements, such as radio transmissions, encoded transcriptions, and other electronic communications that serve not only to link us to world networks, but also to place us under surveillance and deprive us of our privacy. Often our dependence on these tools and the despair that results from their failure to properly operate is a recurring leitmotif in his work.