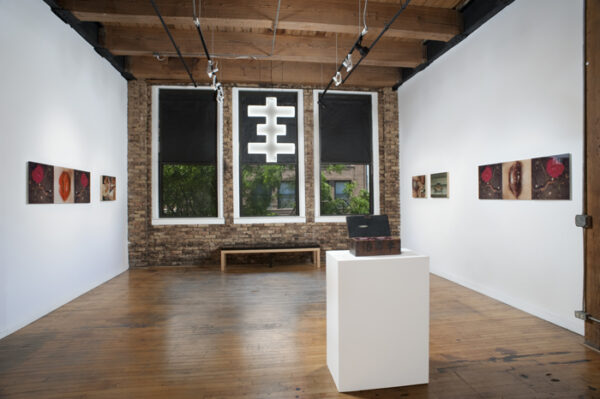 This week: Philip von Zweck (Bad mofo, artist, and storied, long running host of Something Else on WLUW) and Simon Anderson (Associate Professor Department of Art History, Theory + Criticismm SAIC) interview a living legend, Genesis Breyer P-Orridge. Breyer P-Orridge was in town for an exhibition S/he is having at Western Exhibitions.

Genesis P-Orridge and performance artist Lady Jaye Breyer began a collaborative effort begun in 1993Â  that focused on a single, central concern: deconstructing the fiction of self.Â  Frustrated by what they felt to be culturally enforced limits on identity but emboldened by the radical power of love, P-Orridge and Lady Jaye applied collage and cut-up techniques to their own bodies in an effort to merge their respective selves.Â  Through plastic surgery, hormone therapy, cross-dressing and altered behavior, they fashioned a single, pandrogynous being, Breyer P-Orridge. The work is an experiment in identity, a test of how fully two people can integrate their lives, and, ultimately, a symbolic gesture of evolution and the alchemical union of the male and female halves of the human.Â  Although Lady Jaye passed away in 2007, Genesis has continued Breyer P-Orridge, putting into question not only the limits between self and other but also life and death.

Genesis Breyer P-Orridge was born in Manchester, England in 1950. S/he was a member of the Kinetic action group Exploding Galaxy/Transmedia Exploration from 1969-1970. S/he conceived of and founded the seminal British performance art group Coum Transmissions in 1969 and was the co-founder of Throbbing Gristle, Psychic TV, and the spoken word/ambient music performance group Thee Majesty. Throughout Genesis’ long career, s/he has worked and collaborated with William S. Burroughs, Brion Gysin, Derek Jarman and Dr. Timothy Leary, among others. H/er art has been exhibited internationally, including recent exhibitions at Deitch Projects, Mass MOCA, Centre Pompidou, Contemporary Art Museum St. Louis, Barbican Museum, the Swiss Institute and White Columns, amongst others. Upcoming exhibitions will include a solo exhibition at Rupert Goldsworthy in Berlin, a keynote address at the Erotic Screens Conference, Centre for Public Culture and Ideas at Griffith University, Brisbane, Australia and a lecture at the Museum of Modern Art, New York in March. H/er archive was recently acquired for the permanent collection of the Tate Britain Museum.