This Saturday August 22nd is the last chance to see a two-person show at Spoke that uses multiple perspectives and narrative strategies to explore everyday life in the occupied territories. Tirtza Even and Toby Millman’s exhibition addresses “the characteristics and consequences of the ongoing Israeli occupation on life in Palestine,” according to the press release. I haven’t seen the show yet–it’s only open on Saturdays, and the last few weekends have been kicking my ass, childcare-wise– but I’m planning to this weekend. Luckily, Even and Millman both have well fleshed-out websites that enable me to preview their work here in order to entice you to visit, too–unless, of course, you’re not a weekend slacker like I am and have seen it already. 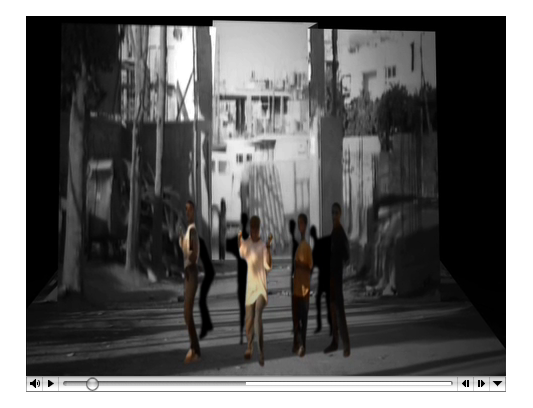 still from Tirtza Even’s Once A Wall, or a Ripple Remains

Video and documentary artist Tirtza Even is on the Art & Design faculty at the University of Michigan. Her work focuses on “the less overt manifestations of complex and sometimes extreme social/political dynamics in specific locations such as Palestine, Turkey, Spain, the U.S., and Germany,” as she puts it on her website. At Spoke, she’s showing a 3-D animation that draws together multiple narratives of life in occupied territory. A recent video work, Once a Wall, or a Ripple Remains (2008) is part of what Even describes as an ongoing media project that examines “the shifting history” of this contested political and psychic terrain via a moving image pastiche of documentary footage, audio voiceovers, and various skewed perspectives. You can see excerpts from this and other related videos on Even’s website. 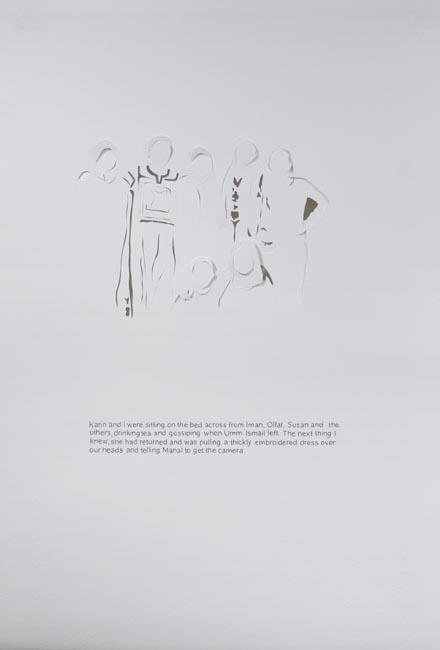 Karin and I were sitting on the bed across from Iman, Olfat, Suzan and other girls, drinking tea and gossiping when Umm Ismail left. The next thing I knew, she had returned and was pulling a thickly embroidered dress over our heads and telling Manal to get the camera.

Toby Millman‘s Stories from Palestine is a series of ink and cut-paper drawings captioned by narrative vignettes culled from his 2006 visit to Palestine. Many of the drawings were traced from photographs and maps produced by the United Nations Office for the Coordination of Humanitarian Affairs for the Occupied Palestinian Territories (maps that are always under revision, as they are updated every few months to reflect current situations in Jerusalem, the West Bank and Gaza).Â  Snippets from Millman’s encounters with various Palestinians are interwoven, their elliptical relationship to the cut-out imagery complicating any straightforward “read” on life in occupied Palestine. The subject of Occupation is a complicated one, to say the least, making the need for a nuanced and multifaceted understanding of it all the more vital. This show looks quite promising in that regard, and I’m looking forward to seeing it.