This week: Guest interviewer Anna Kunz (accompanied by Pamela Fraser) talks to Carroll Dunham about his show at He Said/She Said and more! 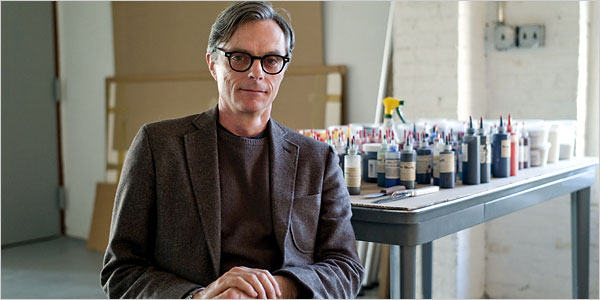 American painter. He completed a BA at Trinity College, Hartford, CT, in 1971 and later settled in New York. Initially influenced by Post-Minimalism, process art and conceptual art, he was soon attracted to the tactility and allusions to the body in the work of Brice Marden, Robert Mangold and Robert Ryman. Spurred on by the revival of interest in Surrealism in the 1970s, Dunham began to make abstract, biomorphic paintings reminiscent of the work of Arshile Gorky and André Masson, executed with a comic twist enhanced by lurid colours and the suggestion of contemporary psychedelia.

In the 1980s he began to paint on wood veneer and rose to prominence in the context of a broader return to painting in the period. Age of Rectangles (1983-5; New York, MOMA) is a highly abstract composition of differing forms, symptomatic of his work at this time: geometric sketches co-exist with eroticized organic shapes while the forms of the wood veneer show through the surface of the paint to suggest surging forces.

Towards the end of the 1980s he began to move towards single, dominating motifs; wave-like forms were particularly common. In the Integrated Paintings series he applied paint-covered balls and chips to the surface of the canvas to further develop the sense of organic life. Mound A (1991; priv. col.) is typical of Dunham’s work of the early 1990s in which his forms began to resemble mounds of live matter, covered in orifices. Around 1993 his paintings began to feature schematic, cartoon figures which suggest the influence of Philip Guston.
NADA
Anna Kunz
Carroll Dunham
He Said She Said
Pamela Fraser
Art Institute of Chicago Modern Wing
UIC
Columbia College Chicago
Jim Nutt
Peter Saul
Picasso
Kara Walker
Rauschenberg
Jasper Johns
Elizabeth Murray
Joe Zucker
Marcel Duchamp installation in Philadelphia
Kelly Kaczynski
Modern Painters
Fresh Air with Terry Gross